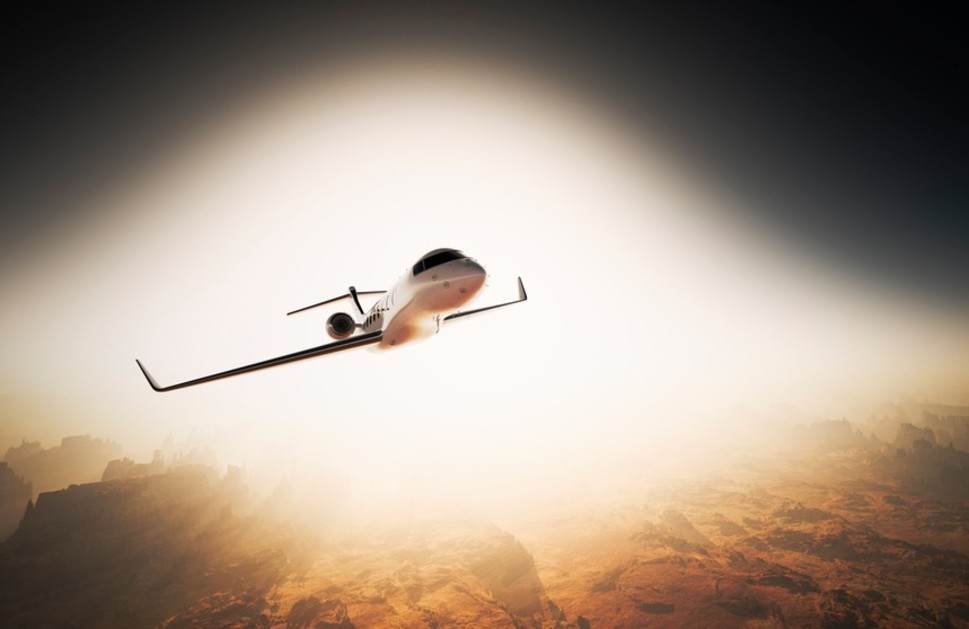 Performance Based Navigation (PBN) covers a wide diversity of navigation routes and procedures in today’s airspace. Over the following pages, Ken Elliott explores the evolution and complexity of PBN in Business Aviation.

Not that many years ago, aircraft navigated point to point, on fixed routes, where the points literally coincided with ground beacons. These VHF Omni-directional Range (VOR) ground beacons assisted pilots flying the routes between different airports, before transitioning to their instrument or visual landing procedures.

Further aiding the overall navigation picture were Automatic Direction Finder (ADF) ground stations, and Distance Measuring Equipment (DME) ground stations. The common denominator, throughout, was that ground stations ruled and were the only source of en route-navigational guidance for onboard sensors to acquire.

Even oceanic and trans-continental flights were conducted using ground based Very Low Frequency (VLF) Omega ground stations. The one exception in common use by airlines and long-range corporate aircraft was Inertial Navigation System (INS) navigational equipment, which is very useful over the Poles.

While still using ground based signals, aircraft were able to navigate off the VOR tracks by adding distance (DME) information to the angular VOR data. This arrangement created offset waypoints, existing in virtual 3D locations, if altitude was also added. The ability to fly off tracks was termed Area Navigation, shortened to RNAV. The further ability to fly to an offset waypoint that was also altitude-based became known as vertical navigation, shortened to VNAV.

Then, like those dust storms that envelope Phoenix, in blew Global Positioning using earth-orbiting satellites. Out went VLF/Omega and not far behind the popularity of ADF, to be followed in our near future by VOR. (Note the FAA announcement in July 2016 to decommission 308 VOR stations).

The lone survivor of the Global Positioning onslaught is DME, and that system will be sticking around for some time to come (more on that below). Note also that INS has evolved to a laser-based Inertial Reference System (IRS), operating widely as a navigation sensor, using its True North reference capability.

Global Positioning Systems (GPS) are the aircraft sensors used to receive GPS satellite information. But GPS, in reality, is only part of the picture for an aircraft usage. It provides one of several inputs to the Flight Management System (FMS), the heart of an aircraft’s navigation capability.

Other sensor inputs are DME and IRS. Both GPS and FMS are often installed as dual configuration, with a number of jets having a third backup system. Understanding the FMS concept as a summed system navigator is important to understanding the later developments of RNAV.

Global Positioning, along with other sensors, have allowed the RNAV waypoint (and offset waypoint) concept to blossom, significantly altering the worldwide airspace flight path landscape. So, knowing that RNAV is a means of navigating off legacy routes, it is intuitive to deduce that by ensuring accuracy and signal reliability, aircraft may manage their own tracks and fly closer together in congested air space.

Enter PBN, the concept of RNAV with the added ability to constantly monitor and alert, so that crews can, in real time, safely fly the routes they select, irrespective of traffic density. It is a bit like the extra concentration required for driving around a big city during rush hour. The addition of monitoring and alerting amounts to Require Navigation Performance (RNP).

In effect, we have been using different forms of GPS monitoring and alerting for a long time, using tools like Random Autonomous Integrity Monitoring (RAIM). The PBN concept is the ability of an FMS to navigate within certain distance and altitude constraints, using GPS as one of its sensor inputs. Reduced Vertical Separation Monitoring (RVSM) further assists with an en route maintenance of altitude. 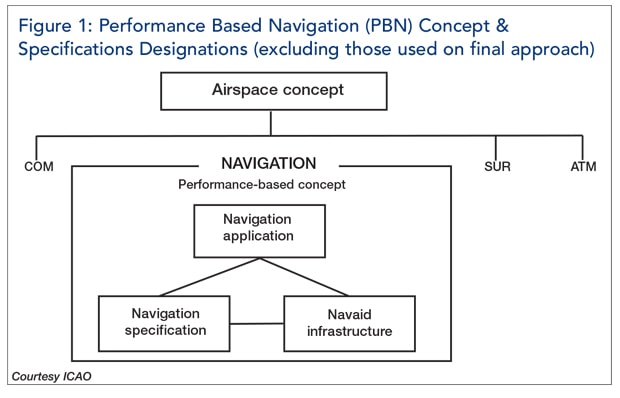 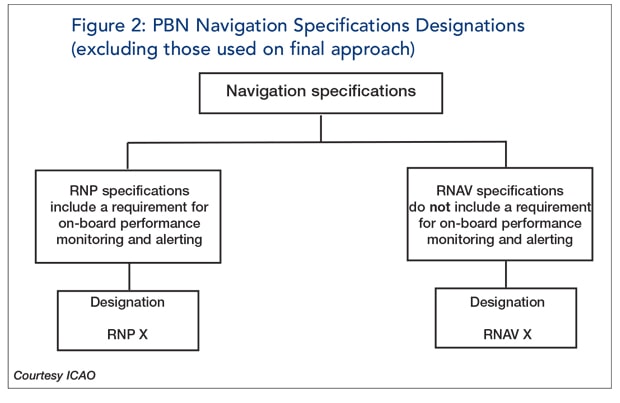 PBN partitions the navigation, based on performance criteria. The number in the designation (see Table B) is the brief maximum deviation in nautical mile distance permitted on either side of the required track. En route specifications allow higher deviation numbers, because they are over longer distances and therefore less critical.

Table B sets out the different specifications against the phases of flight, showing that there is at least one PBN designation for each flight phase.

Designations, as different specifications for RNP, will evolve. Expect to see changes within the next five years to accommodate the move toward time-based operations. Figure 3 alludes to this for RNP, with its reference to 4D navigation. 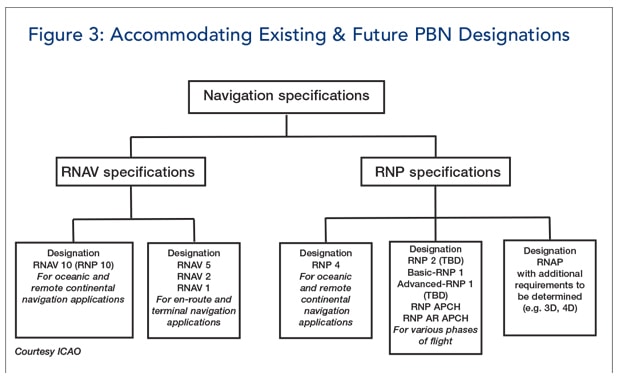 PBN, as RNP, keeps aircraft on track by both monitoring the actual performance along the track and alerting the crew when certain allowable tolerances are exceeded. Firstly, the aircraft is monitored for its ability to remain within a parallelogram (when distance is included) for a given percentage of the time. Note that while a non-PBN navigation error is angular based, PBN navigation is lateral-offset and distance based. 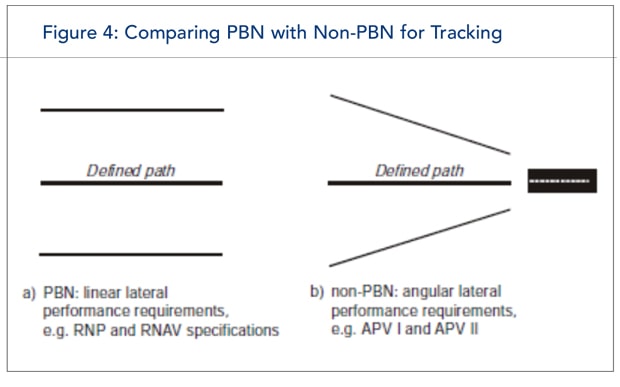 For both RNAV and RNP there is a Total System Error (TSE), which is computed and provided as a monitored percentage. As an example, the permitted error is demonstrated in Figure 5 for RNAV 1 and Figure 6 for RNP 1. 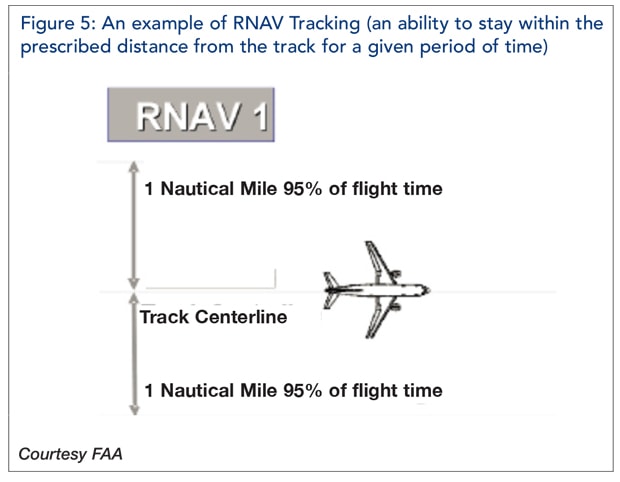 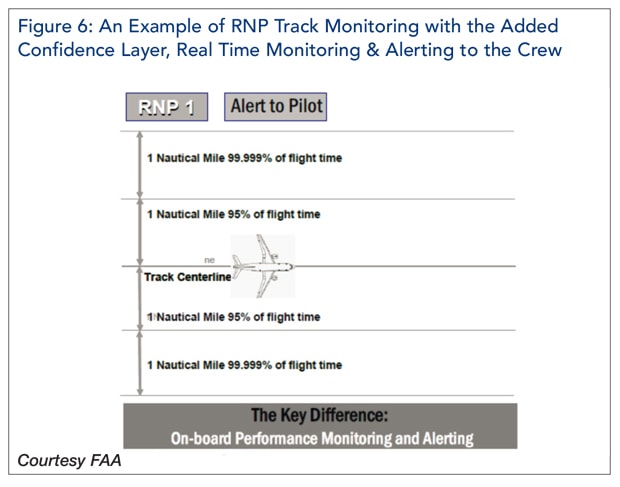 The TSE, in relation to the desired track or path, is made up of three different calculations:

RNP AR is an outlier, because the AR stands for Approval Required. This is an indication that both the aircraft and crew require special approval, beyond the procedure capability itself—overall a much stricter guidance.

Guidance is crucial to operations as well as airworthiness. For operations, the FAA uses Advisory Circulars, designated under series 90, as opposed to series 20 for airworthiness. Each individual operator will need to follow the guidance and conform to an Operational Specification (OPSPEC) and a Management Specification (MSPEC).

Before flying the different RNAV/PBN procedures, the operator will require a Letter of Authorization from their flight standards airworthiness branch.

As mentioned above, the one legacy ground-based technology still in wide use and planned to continue is DME. As it happens DME is highly accurate, and dual DME provides for Theta-Theta navigation, where Rho was used for VOR.

When blended with the GPS, DME can be very useful for integrity and overall accuracy of signal. IRS, providing attitude and position, adds further integrity to the mix.

Reducing risk of accuracy errors is one thing, but reducing the risk for satellite interference is quite another. For this reason, DME stations are being retained to ensure a reliable terrestrial navigation system way beyond 2020. There are means to improve and enhance the DME station, making DME a truly modern technology that is sufficiently adequate to back up satellite based navigation.

DME will also get you close in for ILS approaches, while the development of new Enhanced Flight Vision Systems (perhaps with blended IRS), along with a new rule, will offer a good back up where ILS is not present.

Authorization to Use PBN Procedures

In March 2016 the FAA bundled the PBN approval processes, addressing the different types of procedures. For this the FAA issued AC 90-105A as advisory guidance for operators to follow. While including guidance for flying RNAV (GPS) approaches, it includes radio-to-fix (RF) Legs. RNP-AR procedures that also include RF Legs are covered separately in AC 90-101A (Change 1). AC 90-105A covers a wide range of possible procedures such as:

Being a very useful tool for corporate flight departments, the guidance covers more than just RNP procedures operated in the United States. It also applies to oceanic and remote continental airspace, and in foreign countries that adopt International Civil Aviation Organization (ICAO) standards for RNP operations.

AC 90-105A does not cover instrument approaches, such as WAAS-LPV. Approval guidance to fly these approaches is found in AC 90-107. The information provided in the guidance material, along with other references listed, is very comprehensive and allows for many different ways to operate your aircraft, based on its equipage and its ability to monitor and alert the accuracy of flight path following.

Traditionally, in oceanic airspace, the term Minimum Navigation Performance Specification (MNPS) has been used to determine the ability of an aircraft to remain on its assigned track. Since 2015, for those transiting through the North Atlantic Tracks (NAT) airspace, it has been a requirement to be approved for RNP 10 and 4 operations. As a consequence, the term PBN is now applied to determine these newer NAT requirements.

These requirements have allowed reduced separation along the NAT tracks, such that on November 10, 2016 the minimum lateral separation between aircraft will be reduced to 25nm for the entire organized track system between FL350 and FL390 inclusive.

For legacy operators allowed to continue using the existing MNPS approval, there will be a need to transition to PBN approvals (RNP 10 and 4) before January 30, 2020. Note that this is during a busy mandate season, when ADS-B Out is already required in lots of places. For ICAO NAT region, FANS 1/A, CPDLC and ADS-C will be required for operations at, or above, FL290.

PBN operations are performance-based and allow operators to select the level of performance that best conforms to their aircraft and its equipage. At any one airport there are several transitional approach options, with means to tie into legacy and new instrument approaches.

Existing and recent comprehensive guidance is available to flight crews, enabling them to follow the qualification and approval process. For US operators, for example:

As we move toward the 4D navigation model, where time at a 3D point is the baseline, the transition will be less complex with PBN in place. Managing all the different levels of aircraft performance and operational approvals is tough for Air Traffic Control and will be even tougher in 4D airspace.

PBN in Business Aviation provides a mechanism that reduces that impact, by setting the performance requirements, including options, for each route, STAR/transition, approach and SID/departure.