In this month’s Aircraft Comparative Analysis- information is provided on a selection of pre-owned turboprop aircraft in the $0.5m-1.0m price range for the purpose of valuing the pre-owned Cheyenne II aircraft. 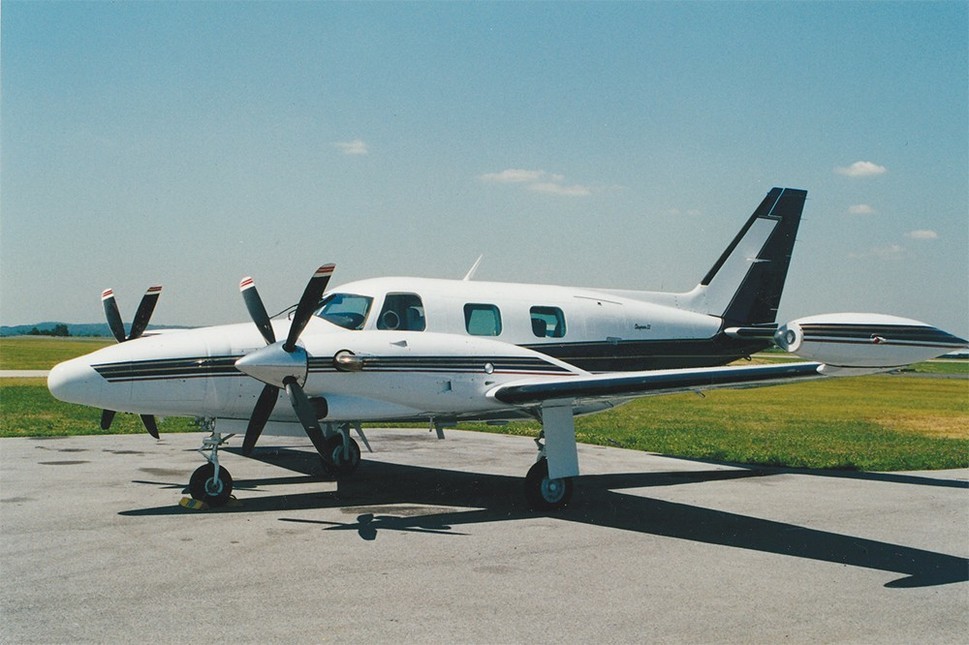 In this month’s Aircraft Comparative Analysis- information is provided on a selection of pre-owned turboprop aircraft in the $0.5m-1.0m price range for the purpose of valuing the pre-owned Piper Cheyenne II for sale.

We’ll consider the usual productivity parameters - specifically- payload and range- speed and cabin size - and we will consider current and future market values. The turboprops that also feature in this month’s Comparative Analysis are the Twin Commander 980 and Mitsubishi Mu-2 Solitaire.

BRIEF HISTORY
The Cheyenne series of turboprop aircraft were manufactured by Piper Aircraft Company. There have been 1-014 Cheyenne-series airplanes built since first flight in May 1979- and 787 are still in operation today (according to JETNET records). The most popular Cheyenne turboprop aircraft built was the Cheyenne II- of which 525 were built from 1974 to 1983. 355 are still in operation today.

The Cheyenne II is regarded as an entry-level turboprop that can seat up to eight passengers. It shares its fuselage and wing with the Cheyenne I and IA models. However- it differs with its more powerful PT6A-28 engines and its inclusion of standard tip tanks. The Cheyenne IIXL was produced from 1981 to 1984.

The Cheyenne III was the first of the large Cheyenne models- and it is about 6 to 8 feet longer and 1-700-2-500 lbs. heavier than the Cheyenne I- II and IIXL models. It is also substantially faster and has superior range as compared to these earlier models. The Cheyenne III and IIIA models were produced from 1980 until 1993.

PAYLOAD AND RANGE
The data contained in Table A is published in Business & Commercial Aviation’s May 2012 issue- and is also sourced from Conklin & de Decker. A potential operator should focus on payload capability as a key factor. The Cheyenne II ‘Available payload with Maximum Fuel’ at 898 pounds is more than double that offered by the Solitaire- while the Twin Commander 980 has a negative available payload with maximum fuel.

CABIN VOLUME
According to Conklin & de Decker- the cabin volume of the Cheyenne II (151 cubic feet) is larger than the Solitaire- but smaller than the Twin Commander 980- as shown in Chart A.

POWERPLANT DETAILS
As noted above- the Cheyenne has two Pratt & Whitney PT6A-28 engines rated at 620 Shaft Horse Power (SHP). By comparison- the Twin Commander 980 and Solitaire both have a pair of Honeywell TPE 331-10 powerplants- rated at 733 SHP and 727 SHP- respectively.

Table B- sourced from Aircraft Cost Calculator (ACC) shows the hourly fuel usage of each aircraft model in this field of study. The Cheyenne II (104 gallons per hour (GPH)) uses 13% more fuel than either the Twin Commander 980 or the MU-2 Solitaire (both consume 92 gallons of fuel per hour). Using data published in the May 2012 B&CA Planning and Purchasing Handbook and the August 2011 B&CA Operations Planning Guide we will compare our aircraft. The nationwide average Jet A fuel cost used from the August 2011 edition was $6.04 per gallon- so for the sake of comparison we’ll chart the numbers as published. 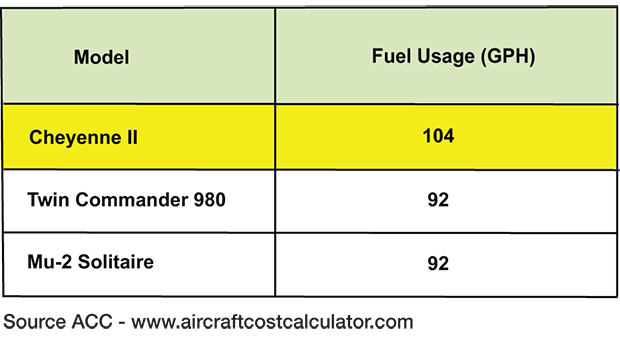 COST PER MILE COMPARISONS
Chart B details ‘Cost per Mile’ and compares the Cheyenne II to its competition factoring direct costs and with all aircraft flying a 600nm mission with an 800 pound (four passengers) payload. The Cheyenne II has a higher cost per mile at $3.92 per nautical mile- which is more expensive to operate by 9.4% than the Twin Commander- and 19.1% than the Solitaire. 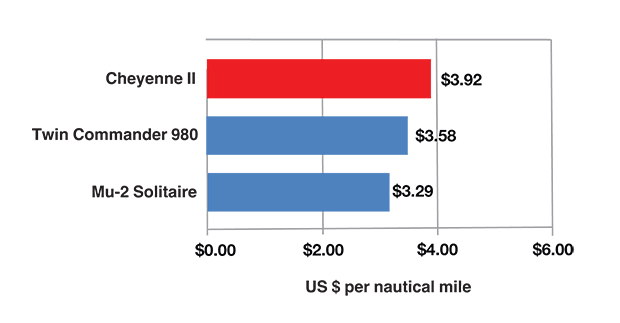 TOTAL VARIABLE COST COMPARISONS
‘Total Variable Cost’ illustrated in Chart C is defined as the cost of Fuel Expense- Maintenance Labor Expense- Scheduled Parts Expense and Miscellaneous trip expense. The total variable cost for the Cheyenne II at $887 per hour- and is less expensive to operate by 6.1% than the Solitaire- and 6.8% than the Twin Commander 980. 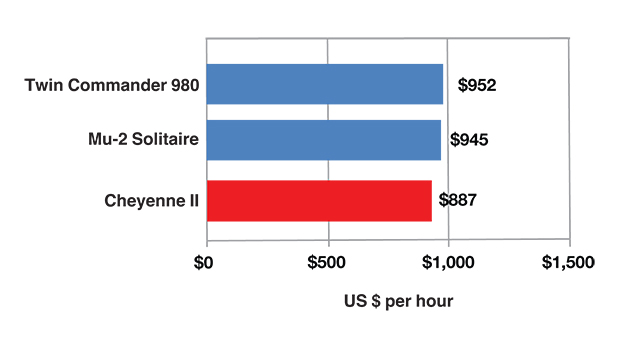 PRODUCTIVITY COMPARISONS
The points in Chart D center on the same group of aircraft. Pricing used in the vertical axis is as published in Vref. The productivity index requires further discussion in that the factors used can be somewhat arbitrary. Productivity can be defined (and it is here) as the multiple of three factors.

After consideration of the Price- Range- Speed and Cabin Size we can conclude that the Cheyenne II has greater payload capability- offers greater range- and has a lower variable cost per hour. However- it operates at a slower speed- costs considerably more to operate per mile and its fuel burn is greater than the competition. 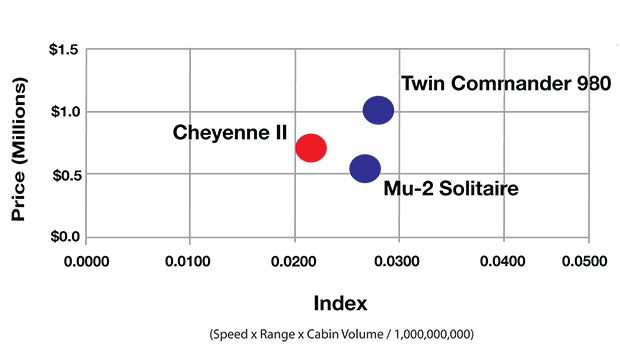 Table C contains the retail prices from the latest Vref edition for each aircraft. The prices shown are for the last year of manufacture. The number of aircraft in-operation- percentage ‘For Sale’ and the number ‘Sold’ over the past 12 months are from JETNET. As shown- the Cheyenne II has 12.7 percent of the in-operation fleet ‘For Sale’. Over the past 12 months the Cheyenne II is showing an average of three sold per month. This sales activity highlights many opportunities for the dealer/broker specializing in the Cheyenne II.

BY CONTINENT
The majority of the wholly-owned Cheyenne II aircraft in operation (347) are located in North America (56%)- followed by South America (26%) and Europe (13%) for a combined 95% of the fleet (see Chart E). In addition to the 347 airplanes recorded in Chart E- however- there are eight further Cheyenne II aircraft in operation today operated under shared-ownership. 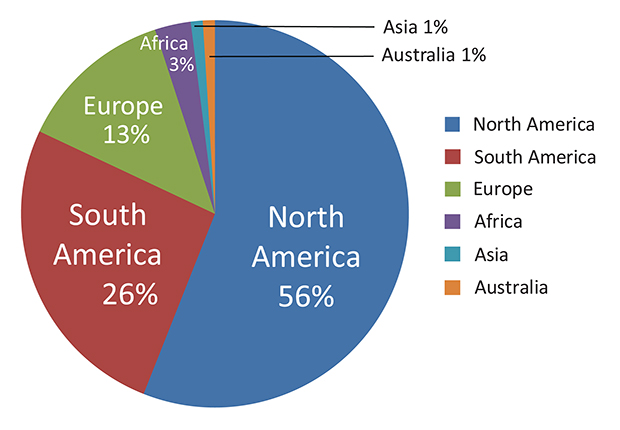 AVERAGE ASKING PRICES
Table D offers an eight-year historical perspective of the Cheyenne II aircraft sales activity trends from June 2004 to June 2012. The table is divided between the four years prior to the economic melt-down (2004–2008) and the four years since (2009-2012).

In reviewing the four years prior to the economic downturn and after- there does not appear to be any significant change in the number of Cheyenne II for sale- number of retail sale transactions- average asking prices- or number of days on the market. Over the past 12 months the Cheyenne II aircraft has shown an increase in the number of full retail sales transactions at 26 compared to 20 last year in spite of an increase in the average asking price.

However- the length of time that the Cheyenne II remains on the market before a sale remains stubbornly high. Nevertheless- it is clear that for those who are selling- and have the patience- the Cheyenne II continues to be popular within the pre-owned market today. 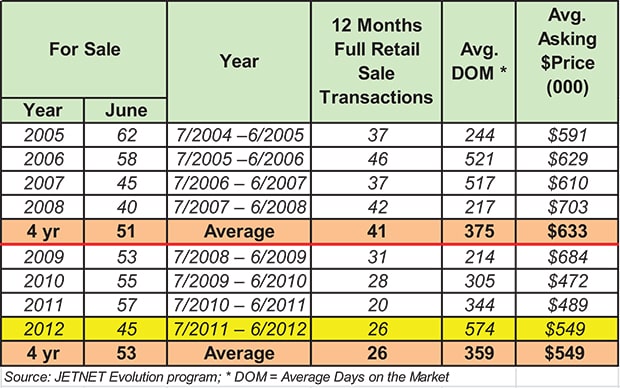 SUMMARY
Within the preceding paragraphs we have touched upon several of the attributes that business aircraft operators value in an airplane. There are of course other qualities such as airport performance- terminal area performance- and time to climb performance that might factor in a buying decision- however. The Cheyenne II evidently fares well among its competition- so those operators in this market should find the preceding comparison of value. Our expectations are that the Piper Cheyenne II for sale will continue to do well in the pre-owned market for the foreseeable future.