How do Cessna’s Grand Caravan EX and Pilatus’ PC-12 NG compare in the single-engine turboprop market? What are the advantages offered by each model, and to whom would they appeal? Mike Chase analyses the performance and productivity parameters…

In this Turboprop Comparison,  we’ll consider key productivity parameters for the Cessna Grand Caravan EX and the Pilatus PC-12 NG (including payload, range, speed, and cabin size) to establish which aircraft provides the better value in the single-engine turboprop market.

How might a desire for higher speed and longer range influence an aircraft buying decision, particularly when that comes at a higher price and operating cost? It’s hoped that the following turboprop comparison will help clarify. 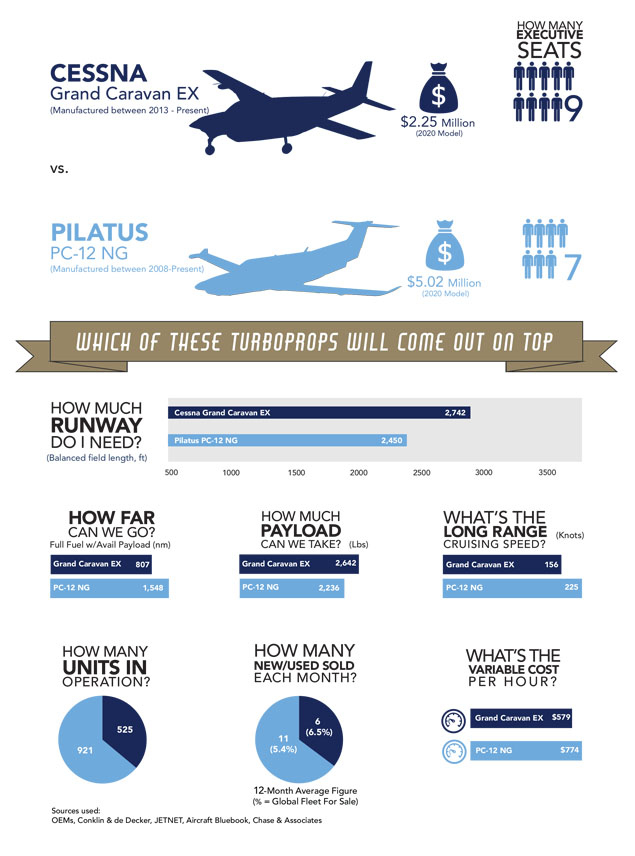 Cessna's Grand Caravan EX was certified in late 2012 and is still produced in 2020. It was engineered for challenging, rugged missions with high payloads, and is able to access short, rough runways. It has the agility of a much smaller aircraft, and can take off in under 1,399ft. The Grand Caravan EX can reach cruise speeds of 156kts and travel distances of up to 807nm.

Of the 525 Grand Caravan EX turboprops in operation, 523 are wholly-owned, with the other two being under shared ownership. Since production started, thirteen units have been retired. 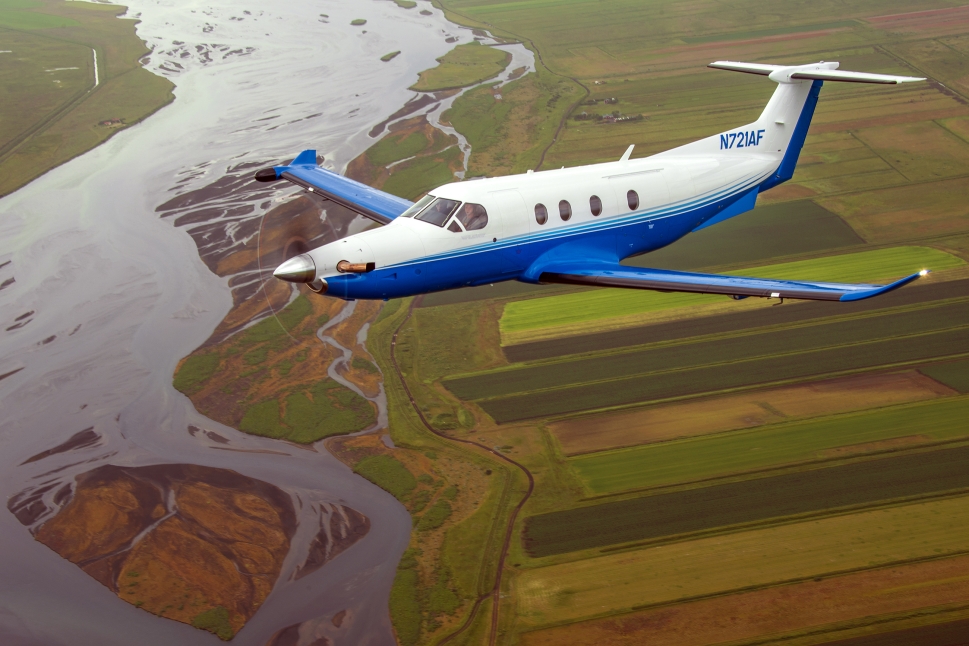 The Pilatus PC-12 model is a high-powered single-engine turboprop, and is equipped with both a passenger door and a cargo door. It is available in several configurations, including six-passenger executive, nine-passenger commuter, cargo, or a passenger/cargo combination.

Currently, there are 841 wholly owned PC-12 NGs in operation worldwide, with an additional 31 in shared ownership and 49 in fractional ownership. Nine have been retired.

In terms of luggage provision, the PC-12 NG provides more internal volume (40cu.ft.) than the Grand Caravan (32 cu ft). Neither offers external cabin volume, although cargo pods are available for the Grand Caravan EX as an option. 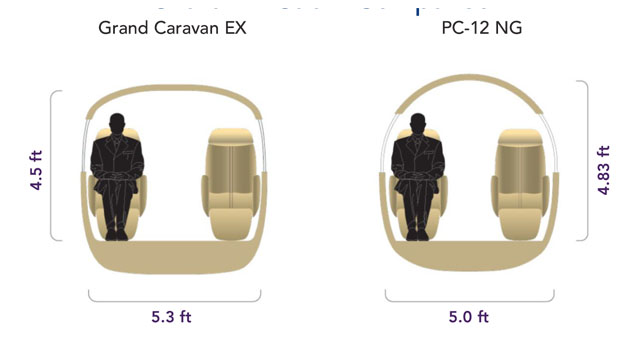 Using Wichita, Kansas as the start point, Chart B (left) shows the Grand Caravan EX (with 807nm) offers just over half of the range coverage of the PC-12 NG (1,548nm), with each aircraft carrying full fuel and available payload.

Note: For business turboprops, ‘Full Fuel with available payload’ represents the maximum IFR range of the aircraft at long range cruise. The NBAA IFR fuel reserve calculation is for a 100nm alternate. This range does not include winds aloft or any other weather-related obstacles. 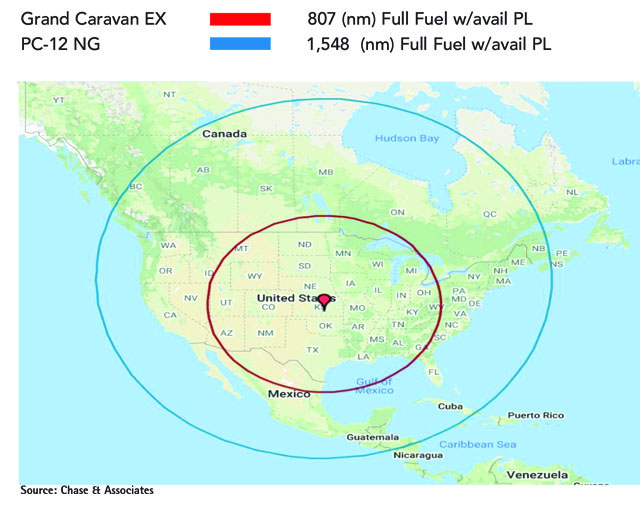 Both aircraft in this field have a single Pratt & Whitney Canada powerplant. The Grand Caravan EX has a PT6A-140 engine with 867shp (which burns 66 gallons of fuel/hour (GPH)), whereas the PC-12 NG has a single PT6A-67P engine providing 1,200shp, and burning 60GPH fuel.

The long-range cruise speed and range numbers listed are from B&CA, while the number of aircraft in-operation, the percentage for sale, and average sold are from JETNET.

Chart D and Chart E (below) depict (and project) the Maximum Maintenance Equity the Cessna Grand Caravan EX and Pilatus PC-12 NG (respectively) have available, based on their age. 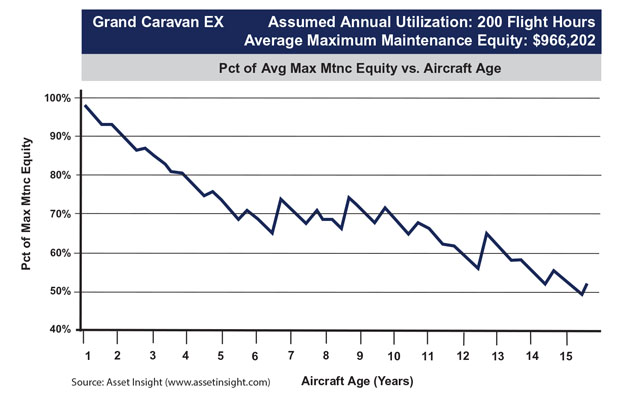 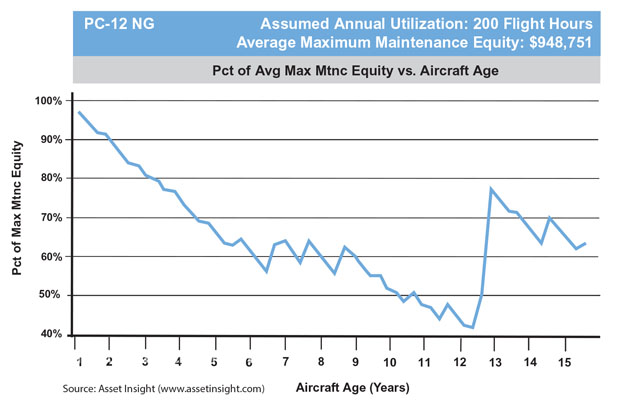 Aircraft that are owned and operated by businesses are often depreciable for income tax purposes under the Modified Accelerated Cost Recovery System (MACRS).

Under MACRS, taxpayers can use accelerated depreciation of assets by taking a greater percentage of the deduction during the first few years of the applicable recovery period (see Table C).

Table D depicts an example of using the MACRS schedule for a 2020-model Grand Caravan EX in private (Part 91) and charter (Part 135) operations over five- and seven-year periods. The price is as published by Aircraft Bluebook at the time of writing.

Table E depicts an example of using the MACRS schedule for a 2020- edition Pilatus PC-12 NG in private (Part 91) and charter (Part 135) operations over five- and seven-year periods. The price is per Aircraft Bluebook. 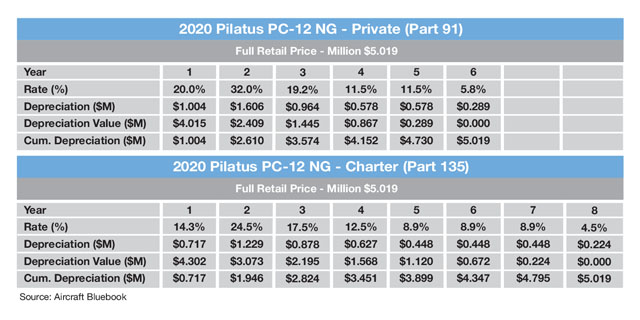 At the time of writing, 33 Grand Caravan EX business turboprops were available on the used aircraft market, and eight displayed prices that ranged between $1.7m and $2.395m. By comparison, there were 46 PC- 12 NGs for sale, and 23 showed asking prices ranging between $2.850m and $4.875m.

While each aircraft serial number is unique, the Airframe Total Time (AFTT) and age/condition will cause great variation in the price of a specific aircraft – even between two aircraft from the same year of manufacture.

The final negotiated price must ultimately be decided between the seller and buyer before the sale of an aircraft is completed.

The points in Chart F are centered on the same aircraft. Pricing used in the horizontal axis is as published in Aircraft Bluebook. The productivity index requires further discussion in that the factors used can be somewhat arbitrary.

Productivity can be defined (and it is here) as the multiple of three factors: 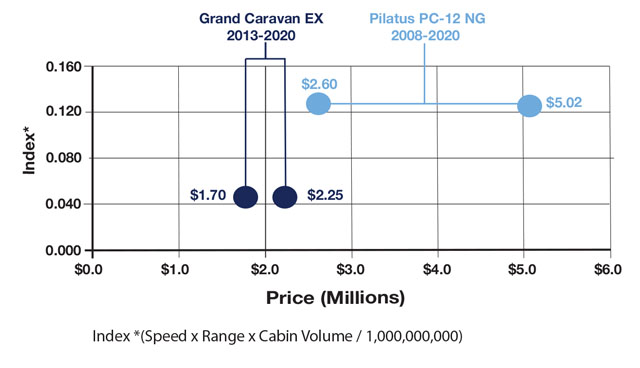 The Faster Speed and Longer-Range Question

The Pilatus PC-12 NG offers considerably faster speed and more range – plus a marginally larger cabin volume. However, the ‘Available Payload with Maximum Fuel’ is lower than that of the Grand Caravan EX.

While the slower speed and less range impacts its placement on our overall productivity chart, the Grand Caravan EX comes in with a lower new and pre-owned price, and has a lower variable hourly operating cost than the PC-12 NG model.

These are all questions that should be considered with a consultant to help determine the complexities of which turboprops for sale are best suited to an individual operator’s unique needs.

Within the preceding paragraphs, we have touched upon several of the attributes that business turboprop operators value. There are other qualities such as airport performance, terminal are performance and time-to-climb that might factor in a buying decision, however.

Ultimately, there is plenty for a prospective buyer to consider when deciding which performance criteria is better suited to them in an aircraft.