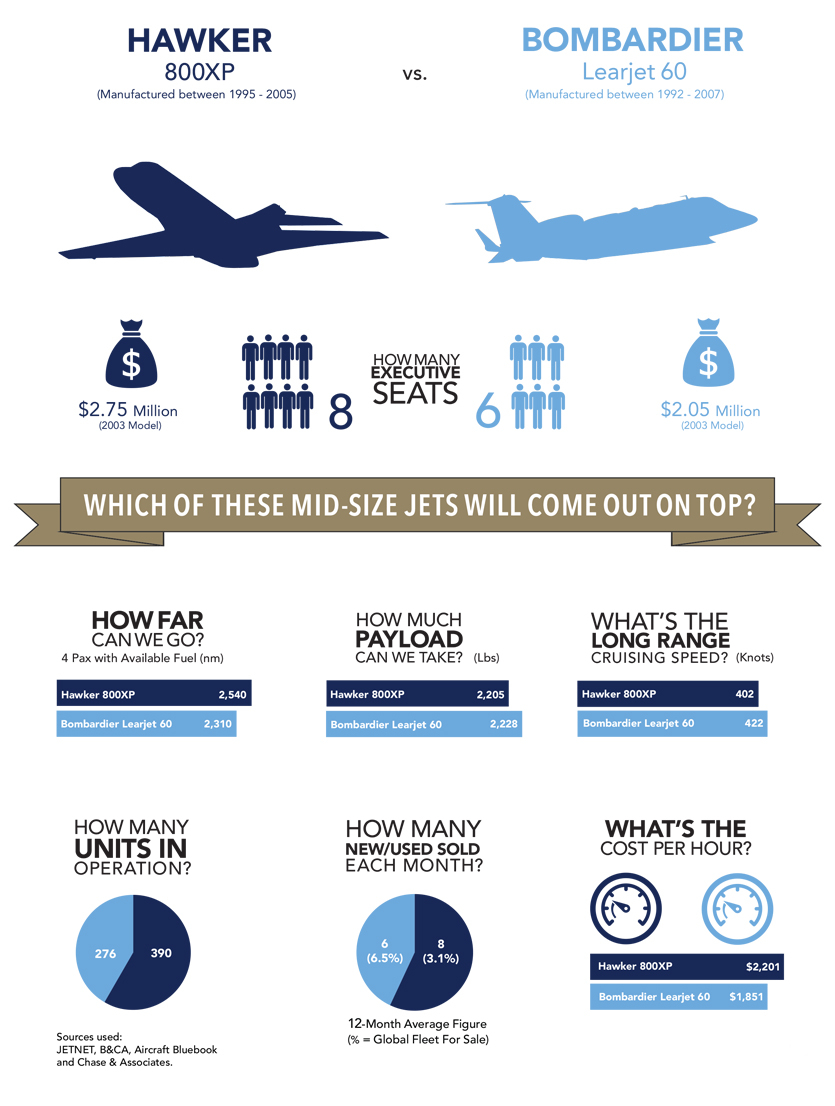 Hawker 800XP vs Bombardier Learjet 60
How to Get Value from a COVID-19 Affected BizJet Market
What Does it Cost to Operate a Light Jet?
Cessna Citation Excel vs Hawker Beechcraft 800XP: The Insiders Guide Aircra...
View all Hawker articles.

The history of Hawker jets began with the Beechjet 400, which evolved to the Hawker 400XP. Initially developed as the Mitsubishi MU-300 Diamond, Beechcraft acquired the aircraft rights in the mid-1980s, with the model certified as the Beechjet 400 in 1986 and able to seat up to eight passengers.

There have been several upgrades since to that initial model. The Beechjet 400A (Beechjet 400B if delivered outside of the US), for example, offered longer range, greater take-off weights, and other improvements. And the Hawker 400XP upgrade provided an increased weight capacity and a nine-passenger seating option.

Meanwhile, in the Mid-Size jet arena, the Hawker 800 twinjet series was produced over a thirty-year period from the early 1980s, starting with the Hawker 800A (or Hawker 800B for models delivered outside of the US). The model was originally developed from the British Aerospace BAe 125, and could accommodate eight passengers. It offered a range of 2,580nm, and utilized two Honeywell TFE731-5R engines.

Subsequent upgrades were introduced over the years, including the Hawker 800SP, which saw winglets added, helping to increase range and speed slightly, and also offer better performance at hot and high airports.

The Hawker 850XP, certified in 2006, brought a slight range improvement over the original 800XP, thanks to the inclusion of winglets – a modification that also helped improve climb performance.

Branching out from the base Hawker 800 design, the Hawker 750 is a spacious Mid-Size Jet with a sleek interior featuring stand-up headroom and a full refreshment center. Based on the Hawker 850XP model, a ventral fuel tank was replaced by an externally accessed baggage pannier, which also reduced the range by 500nm to around 2,200nm.

Meanwhile, the Hawker 900XP, powered by Honeywell TFE731-50BR engines, also derives from the Hawker 800 family, but the new engines give it a range of up to 2,930nm.

And finally, the 3,150nm-range Hawker 1000 was introduced as the intercontinental version of the Hawker 800 model. A fuselage stretch of almost three feet equates to a roomier cabin while allowing increased fuel capacity. Powered by Pratt & Whitney PW305B engines, this model was also faster than previous Hawker models, with a faster climb.

Filling the Super Mid-Size Jet segment, the Hawker 4000 can carry eight passengers in its usual configuration. A stand-up cabin offered more space than all other Hawker models, and that was helped partially by its carbon composite construction. While offering more fuel capacity than its siblings, Pratt & Whitney PW308A engines powered the Hawker 4000 faster and further (3,445nm).