The impacts of NextGen and SESAR mandates – mid-2015 report... 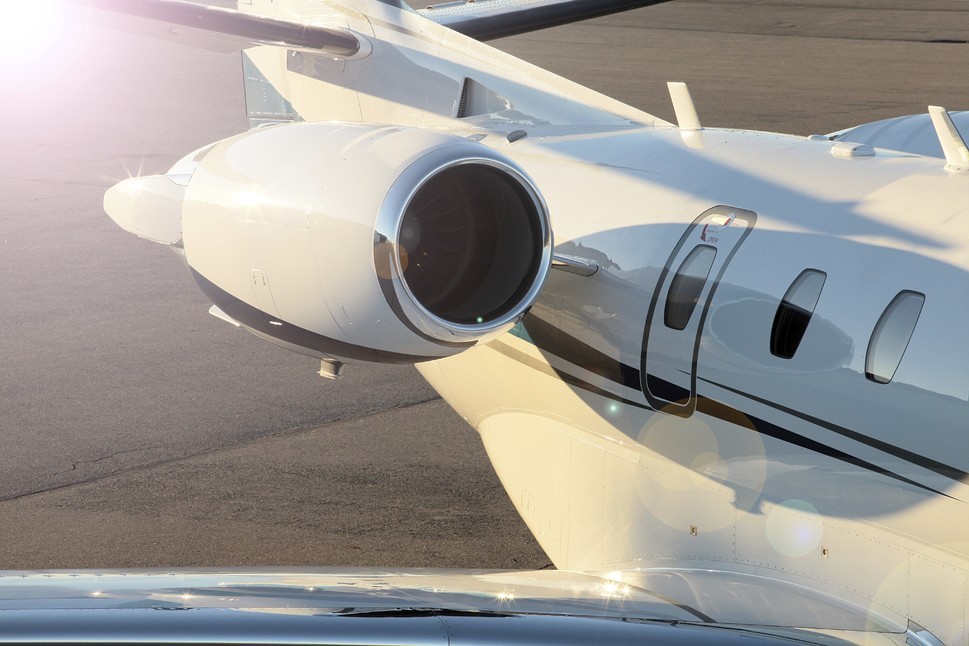 As we venture past the midpoint of 2015, it is appropriate to take stock of the impacts of NextGen and SESAR mandates. Below you will find a potpourri of perspectives on this fluid technology transition that is expected to level-off around 2020. Since 2015 began, we have seen several changes in how authorities are addressing mandates. An aggressive FAA has been supporting ADS-B equipage while a non-cohesive Eurocontrol has further delayed the implementation of DataComm requirements under EU operating rules.

Operators do not suffer well such a flip-flop on requirements, especially in the case of EU DataComm. This technology is partially driven by varying levels of preparedness across the different nation states of Europe. Regulators and the authorities responsible for ground equipage need to understand the long-term impact that results when mandates are delayed. While delay may be the right answer for the moment, the conditions that arose and created the need for postponement could and should have been avoided.

There is a very large group within the aviation community that considers it totally appropriate to delay equipage, approvals and training for avionic mandates, often based on the previous record of date-stretching or later relaxation of rules for certain types of aircraft and operators. Delaying implementation dates is fodder for their cause. But as outlined in previous articles, the industry cannot sustain a torrent of last minute upgrades from 2018-2020, for example.

Apart from the FAA consideration of relief for ADS-B GPS requirements for legacy air carrier operators, the Administration has stood firm on the 2020 ADS-B rule regarding to whom it applies and which equipment is needed for operations in which airspace. FAA has applied its resources to understanding and answering the concerns of operators, including small GA, creating forums for industry and user groups. It has also enabled funding for lower-cost solutions of ADS-B.

In parallel with FAA efforts to enable operators to add ADS-B, finance groups such as NEXA Capital Partners LLC are providing favorable loans to all US-based GA operators that may, over time, be used for NextGen equipage. NEXA has also placed an order for 10,000 L3 Lynx multilink ADS-B units as part of a Jumpstart 2020 Program for ADS-B across light GA. Sadly NEXA was meant to be both publicly and privately funded to support these kinds of programs, but at this time is only funded via private means.

Another development that is encouraging for operators is the industry partnership of rivals to pool their unique resources into a single solution.

A recent example of this cooperative approach is the announcement by both Rockwell Collins and Universal Avionics to partner on an ADS-B solution for aircraft equipped with certain of their existing products. This arrangement allows anyone with Universal Satellite-Based Augmentation System (SBAS) Flight Management Systems (FMS) to integrate with Rockwell TDR-94D Transponders.

While still requiring an STC, the ground working of sharing integration, proprietary data and factory support is laid. Both the FMS and the transponder models are ADS-B ready, making this approach a win-win between providers and their users.

Another aspect of these creative solutions available for mandate solutions in the market place is their aptitude for growth. If, for example, the equipment such as an FMS can provide for the new Lateral Path Vertical (LPV) approaches and provide DataLink messaging, then there is a selling advantage to the aircraft owner going forward.

Often operators, in a desperate effort to keep costs to the minimum, will resolve for the short-term but set themselves up for failure later, especially when it comes to selling the aircraft.

DataLink rules under Eurocontrol have yet again changed, pushing back dates to those outlined in Sidebar A. 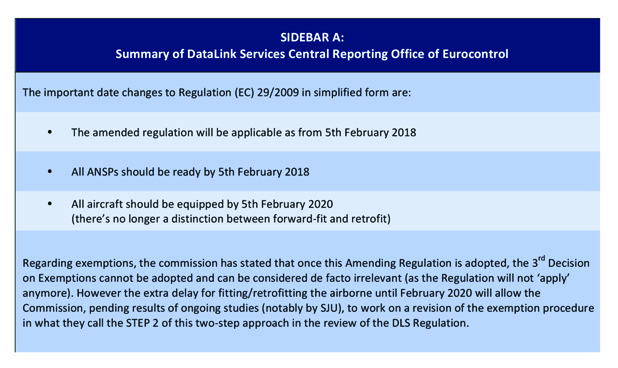 While the FAA wrestles with the potential spin-off of its Air Traffic Organization (ATO) into a public-private arrangement, it at least has singular authority across all of the 50 states and the District of Columbia. On the other hand the European Commission (Transport) and its aviation divisions, have the disparate interests of all 28 member states to grapple with. So it is no small miracle that it now has Version 1 of a SESAR Deployment Plan well underway. For those who like to peer into a murky magic mirror and ponder on the future this, at least, provides a way forward for those technologies currently being embraced. 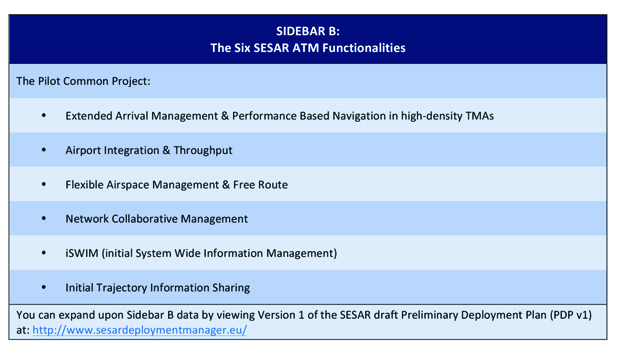 Merging the current implementation agenda into the future, the FAA is focusing on four NextGen areas (see Sidebar C, below).

On June 3, 2015 the FAA updated Congress on the current status of NextGen. While the brief report poses the positive spin to ensure continuation of the funding stream for airspace programs, it is a useful read for those wishing to know at high level where we are today regarding NextGen. Read it here: https://www.faa.gov/nextgen/media/CNO%20Report_Final.pdf.

Down in the weeds, but still under the watchful eyes of Congress and the Government Accountability Office (GAO), the FAA is also working with RTCA committees to better measure the implementation of NextGen in US airspace. Fortunately, due to Congress insistence, the interests of all stakeholders need to be monitored. This includes the very different operational characteristics of Business GA in an arena where air carrier flight track interests dominate.

Metroplex areas, while centered on major hub airports, include a number of regional GA airports. NextGen implementations and particularly PBN (RNP approaches) at hub airports, are of concern with respect to unintentional impacts to secondary airport operations.

The key consideration of any change to our shared airspace is “do no harm”.

On a wider front and in a spirit of collaboration, the US and EU have been sharing their NextGen and SESAR programs. Focusing on interoperability, between both ground and air portions of their Air Traffic Management systems, they have developed a Memorandum of Cooperation (MOC). View this document at: http://www.sesarju.eu/sites/default/files/documents/reports/State-of-Harmonisation.pdf.

Of course the big US NextGen success story for GA is WAAS LPV, an SBAS solution that compliments ILS. Further, when operators use HUDs with EVS (EFVS), they may complete Category II equivalent straight-in approaches at thousands of runway ends. Even without EVS, operators can fly low visibility approaches into thousands of non-ILS approach runway ends.

Looking much like part of an Impressionist painting, the above map of US WAAS-LPV procedures, with and without ILS, is a result of an astounding achievement by the FAA and its partners. No other region of the world can offer such a wealth of low visibility procedures for appropriately approved aircraft and crews.

Finally for GA operators a review of the FAA’s NextGen website could be helpful to understand the benefits and expected national airspace impacts (www.faa.gov/nextgen).

For aircraft brokers, buyers and sellers, the realistic equipage status of a specific aircraft is of significant concern nowadays. Just a quick look at Table A will show you how frustrating it can be to find out exactly where an aircraft serial number stands with respect its NextGen mandate status. (Note; the term NextGen is here referring to all PBN, DataComm, ADS-B and other requirements that are either mandated or operationally required from a global perspective).

Making this situation worse are changes made to mandates, either by date or by equipage. As mentioned previously, this is a concern with DataComm in the EU. FAA’s ongoing DataComm clarification, particularly as to how equipage requirements may impact Business GA, adds uncertainty.

The term equipage is in itself a generalization because it includes software needs that can change like the weather and complicate an operator’s authorization to use installed hardware.

Aging aircraft that have fallen ‘off the radar screen’ of OEM primary attention are in an even worse situation, unless you work with an MRO that has real expertise on the aircraft model of interest.

As mentioned, both in this article and previous AvBuyer articles, there are great solutions being offered by MROs for legacy aircraft.

However, Table A still applies as some of these creative solutions are very dependent on existing avionics that can vary dramatically by serial number or simply because an owner upgraded differently to the norm in the past, by their own preference. To be fair to aircraft OEMs there are several quality mandate upgrades available for those aircraft considered ‘off the radar’. Shop around before major decisions are made.

It is hardly surprising, therefore, that given these uncertainties and with respect to NextGen/SESAR or ICAO mandates that many operators, sellers and buyers want to hold out on upgrades. However, as demonstrated last month, installation considerations overall still favor an earlier, rather than later, implementation of upgrades. A good OEM or MRO, and there are several, will help you navigate the complexity and specifics of upgrades.

Where We’ve Come From

Most of us like to know at least a little of our genealogy because it helps us understand both our heritage and, perhaps, the complexity of who we are today. Equally, a reflection on the development of our national airspace from humble beginnings to modern day complexity helps keep the roadmap in a proper perspective. 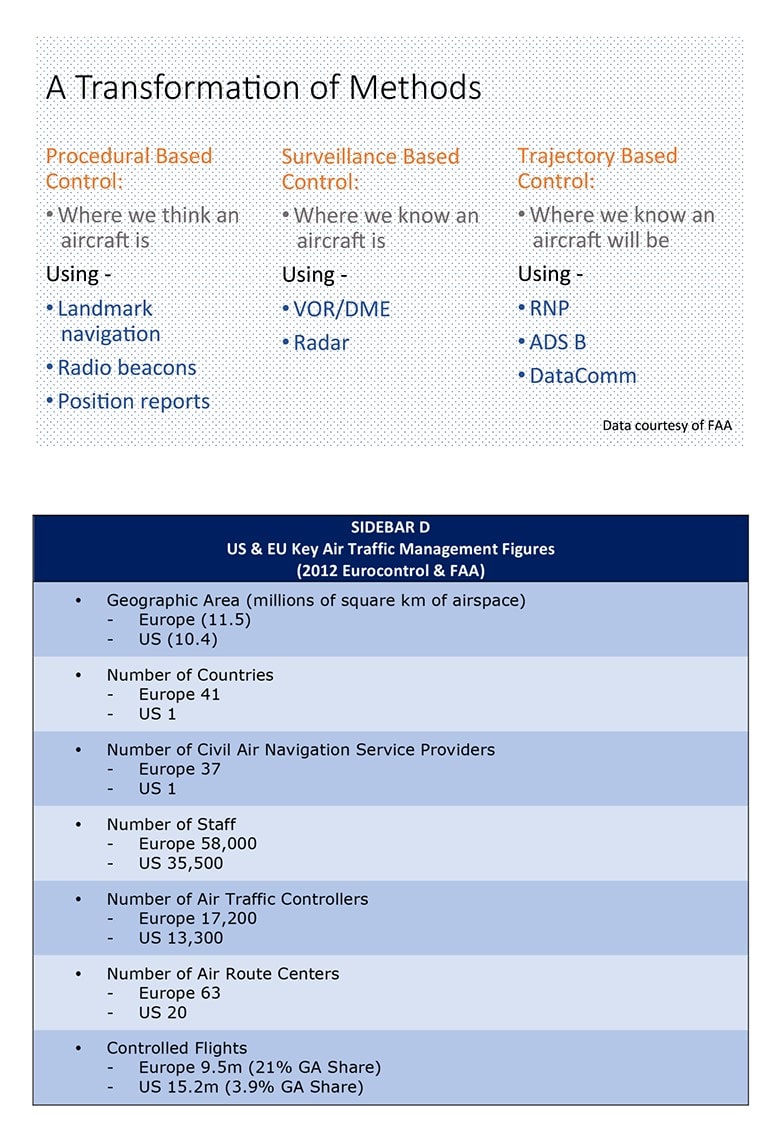 We have arrived at a complexity that is driven by economics, population, the environment, demand for efficiency and above all, a need for increased safety. Our common airspaces are under an ever-increasing usage demand, while upcoming regional airspaces across other continents are playing ‘rapid catch up’. Sidebar D (above) clearly demonstrates the need for an integrated (or at least seamless) airspace across the regions of North America and Europe.

The aviation industry and authorities across different oceans and borders have come a long way since Orville & Wilbur Wright. But with unmanned aircraft systems (UAS) entering the mix of airspace users in the near future, the need for NextGen/SESAR and ICAO integration is paramount.

Business GA users are typically far better technologically prepared for NextGen than their air carrier counterparts, so despite the concerns addressed in this article, overall, there is room for increased optimism, as we pass the 2015 mid-year mark.