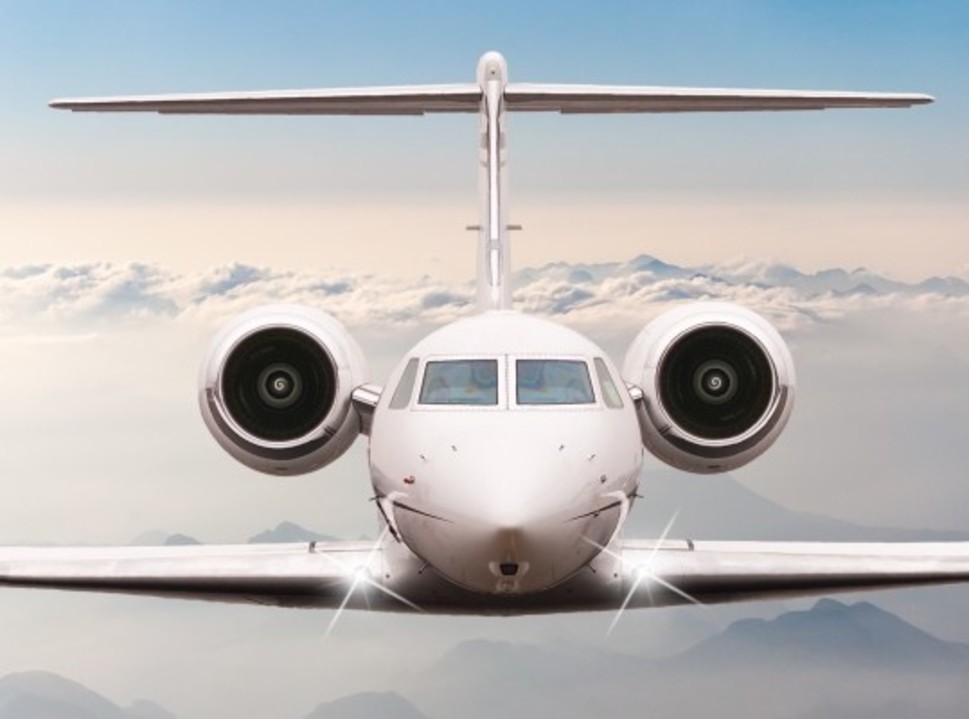 Helping you understand the technology, integration and advances of aircraft avionics and equipage, Ken Elliott concludes his update on NextGen with a summary of PBN.

Performance Based Navigation (PBN) has different connotations for business jet operators than for Scheduled Air Carriers, yet because they often share the same regional airspace and airports, it is important for operators to understand PBN as if it applies to all. PBN procedures are a vital part of NextGen and are widely embraced in specific regions of the world. For NextGen, PBN procedures improve capacity, efficiency, safety and importantly for the Business Aviation/General Aviation community, access.

PBN is all about routing, separation and replacing point-to-point manual traffic control with prescribed flight paths for arrivals and departures. In reality, though, PBN is more than that. It includes the final approach, landing, take-off and initial departure, for without success in any of these segments a PBN procedure would provide little benefit. Also, because the need for manual air traffic controlling is less, both air traffic and pilot workload decreases.

For many years, navigation for arrivals and departures was based on ground-positioned navigation aids. This has transitioned into Area Navigation (RNAV) procedures, where the waypoints are positioned closer to the desired flight path and not above the navaid itself.

Required Navigation Performance (RNP), which is more capable than RNAV, enables flight paths between waypoints that may be curved and/or optimized to provide the most efficient means for movement to and from the runway. Further, during en route operations the flight path is optimized with reduced spacing between tracks, such as during Oceanic flight.

As PBN can be a 3D method of navigation, straight-in Lateral Path Vertical (LPV) approaches flown by General Aviation are to be enhanced by the newer RNP curved arrivals, and current RNP Approval Required (RNP-AR) approaches used by air carriers are now enhanced with vertical guidance.

By replacing straight-in approaches with ‘RNP-with vertical guidance’, simultaneous IMC-based operations on multiple runways may be conducted, all because the potential for flight path conflict will be avoided.

The use of efficient direct vertical descent is termed Optional Profile Descent (OPD) and avoids the dive and drive of step down approaches, just like RNP lateral guidance avoids the vectoring of controller leg-to-leg guidance. Equally, the vertical guidance coupled with lateral (LPV - Localizer Performance with Vertical guidance), as used on WAAS-LPV approaches, provides ILS-like guidance for General Aviation operations.

PBN is now moving toward a 4D affair, using time-based flow management, to ensure aircraft arrive at ‘points in space’ by adjustment of an aircraft’s speed on efficient and specified tracks. The use of auto-throttles, as a means of an aircraft’s fine control, is further enhanced by the display of required or controlled time of arrival (RTA and CTA) at a future fix.

A Short Journey into Today’s PBN

From 2003, the FAA has had a regularly updated PBN road map. The map started with Q routes for en route and RNAV for terminal, following somewhat the existing ground-based navaids and vectors as overlays. The challenging terrain of mountain-bound airports has driven the need for RNP approaches that, since before 2010 have enabled a non-traditional approach to navigating in the NAS.

RNP approaches require a high degree of continual technical accuracy, so the reliance on the GPS constellation, whether it is using US or another region’s satellites, is key to safety and performance. But who has what for GPS constellations used for PBN?

Different RNAV and RNP operations may be performed based upon the phase of flight. Table A lists the different types of PBN operations and the phases of flight where they are used. It also lists the purely satellite-based operations. 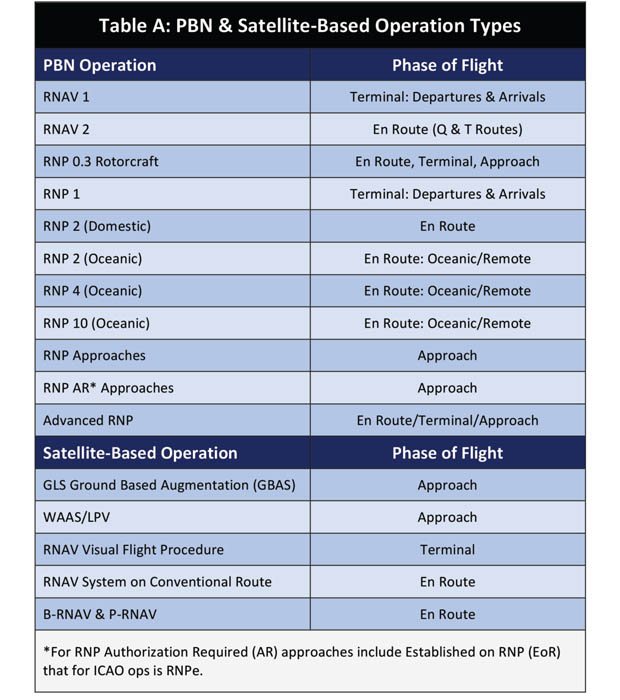 Table B, meanwhile, shows the sub-types of PBN RNAV 1 and 2 operations and then the two main groups of PBN approaches. (Note that ILS and other ground-based approaches are not PBN).

The use of PBN is carefully controlled by Guidance. Table C lists the FAA guidance material for all the various PBN operations.

Air carriers are currently utilizing RNP-AR approaches that, being ‘Authorization Required’, are specific, by Special Authorization (SA), to the airline. Business jets and others are not frequently using these approaches today, because of the SA requirements and because they are typically used at large airports where simultaneous multiple runway operations are in use.

Interestingly, PBN has a bright future with the inclusion of time-based operations. Although the future is not set in stone, much progress has been made to enhance the current PBN to advanced PBN, using new and existing ground and airborne technologies.

Table D provides some of the technologies and their roles in the 4D environment. Organizations such as MITRE and NASA have been collaborating with FAA for several years developing the long-term plan. Each step will be simulated and prepared for prototype introduction at a demonstration airport. 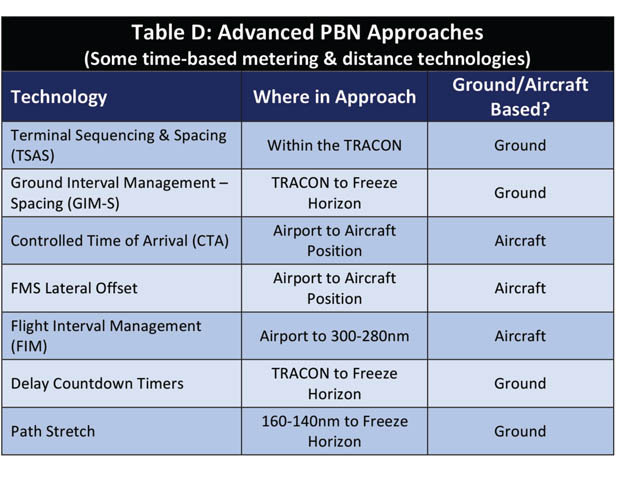 In effect the advanced PBN development is allowing aircraft to be sequenced and spaced further out from the TRACON. The pathways are stretched and shortened as necessary to ensure proper arrival times at metered points in space. Speed and time govern the spacing and arrivals.

Ground and flight deck tools are under development to ensure this can work for both equipped and non-equipped aircraft. Just as with the airspace situation today, accommodation has to be made for aircraft operating in all categories and all levels of equipage.

As PBN can and should be extended to include the final phase of the approach, it may be helpful to look at this from a new and interesting perspective. Assuming an aircraft has navigated all the way to the Final Approach Fix (FAF), or in ICAO speak, Final Approach Point, it will continue on, based on the approach type and visibility, to an Approach Decision Point (ADP). 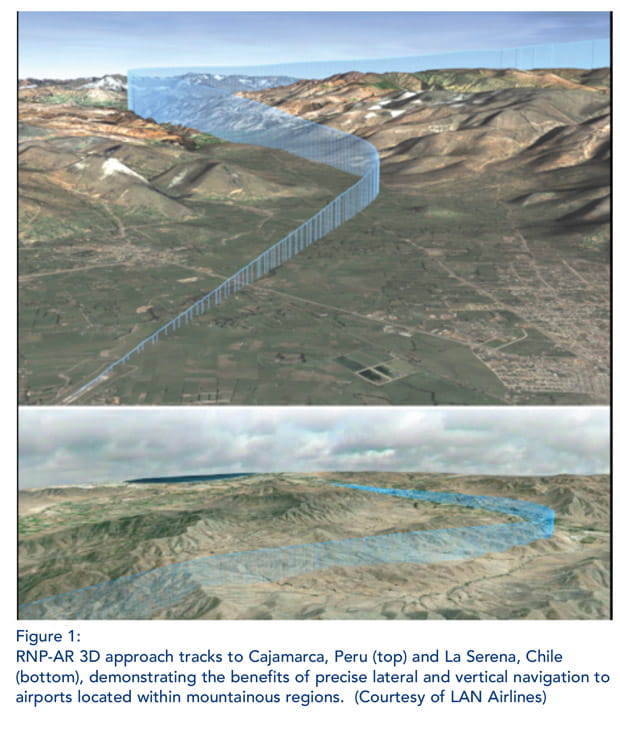 With WAAS-LPV the traditional Category 1 ILS, having a fixed ADP at 200’ height above terrain (HAT), is shifted from 200’ to a terrain or obstacle-derived decision point higher than 200’. The same applies to LNAV/VNAV approaches. So, when looking from on high at regional airspace, there is a firewall that occurs, preventing seamless operations during weather (specifically visibility impacted conditions). Controllers vector traffic and selectively advise approaches, while cautiously spacing air traffic. Some corporate operators reschedule or reroute their trips.

Now imagine, the IFR becomes VFR because the IMC becomes VMC to the aircraft equipped to ‘see’. In Q4 2016, the FAA is set to release its long awaited 91.176 rule that changes the game and provides a path for full ‘VFR-like’ operations, for much of the time. These are actually termed Equivalent Visual Operations (EVOs) and one day could rule out the need for pilot instrument ratings.

Advanced vision technology will allow operators to use the rule and with special authorization, by operator, approach to land in 1,000, then later 300, RVR conditions.

FedEx having equipped its fleet this way, will be among the first in the world to have the authorization to extend an RNP approach, using advanced vision and head-up guidance to the runway touch down zone during low visibility conditions. This should take place at Indianapolis (IND).

China is watching and enabling its transport aircraft fleets to operate in a similar way. That country will be the first to require head-up vision guidance for specific categories of aircraft.

The key here is that, in effect, the ADP requirement goes away! Aircraft may simply continue the approach to flare, touch down and roll out. Equally, at the departure end, the RVR limitations imposed on air carrier operations should go away. PBN procedures now in place will be enhanced with data comm, ADS-B in/out and advanced vision, in seamless flight, from ramp to ramp.

That level of capability is a long way away, but taking this concept to the next level implies unmanned aircraft in automatic traffic control environments with few or no humans in the loop.

Notably, the 91.176 rule lifts the Approach Ban Clearance requirement that applies to air carriers; with lower technology equipage costs on the horizon, they are likely to join the elite group of freight and business jet operators that now benefit from a more restricted version of low visibility operations.

On May 26, Australia switched off a number of different ground-based Navaids. Those remaining will become a new Backup Navigation Network (BNN). Australia is relying on operators able to navigate with GNSS as the primary means of navigation using…

Non-commercial operators of foreign-registered aircraft not wishing to take advantage of RNP1 and RNP2 traffic services will not be required to apply for a two-year exemption to operate in Australian airspace. Operators should note on the flight plan the navigation capability of the aircraft and crew.

Recently, Dassault's Falcon 2000LXS became the first business jet to fly an Instrument Approach Procedure (IAP) with a 200’ published LPV minima, using Europe's EGNOS LPV200 satellite service. While others have been flown to 250’, this was the first to be equivalent to an ILS Cat 1 decision height.

Of concern to the FAA and others is the ability to be affected by GPS interference, given the universal application and reliance on satellites and the receiving technology.

The source of the jamming, centered on Cairo Airport, was unknown. Similar GPS jamming activity recently took place along the Korean border. Is this an early warning sign of what may be to come in less volatile or sensitive locations?

The Flight Services Bureau (FSB) has issued a warning of frequent occurrences of Gross Navigation Errors (GNE) by aircraft navigating off course while flying NAT Tracks. Today, a GNE is considered to be 10nm or greater (GNE was 25nm) off the assigned route. In two cases the deviations resulted in near misses, and the occurrences are not just associated with NAT Tracks.

The concern is throughout Oceanic airspace, where ATC cannot monitor flight paths. FSB offers excellent avoidance guidance for pilots on its website. 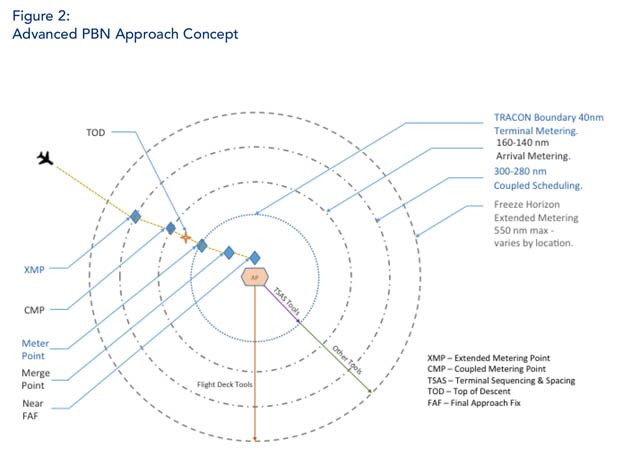 PBN covers a large segment of airborne activity and should never be viewed in isolation. Data Comm and ADS-B in/out are significant contributors to ensuring the long-term success and growth of PBN.

GPS interference is a concern, so providing back-up navigation, such as Alternate Positioning, Navigation and Timing (APNT), using improved DME, coupled with ADS-B and IRUs is a consideration for PBN back-up. New technology DMEs may be distributed more widely across the NAS, while by 2020 aircraft should be fully ADS-B equipped.

Being able to operate from ramp-to-ramp in virtual VFR, most of the time, is another achievable dream. Kudos to the FAA for enabling the airspace (rule 91.176 when released), while we await the arrival of the appropriate low cost technology to do so.