Anyone thinking of international travel should consider ADS-B now... 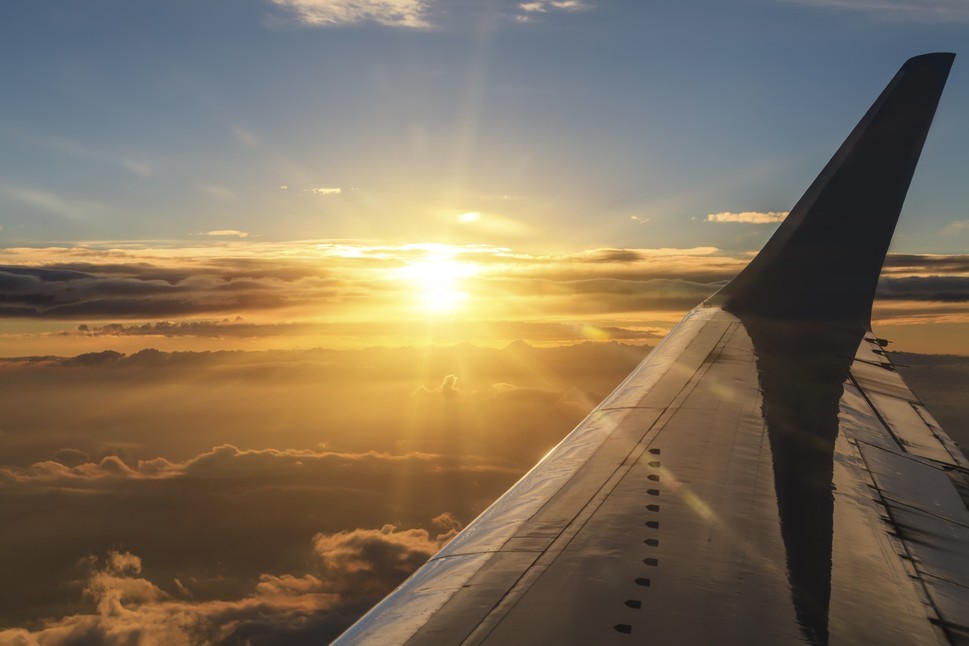 We’re four years from seeing ADS-B implemented across the United States, but other regions of the world are already well under way with their plans. Dave Higdon offers a brief update on the ADS-B scene globally…

An airport acquaintance of mine not long ago lamented the need to install an ADS-B Out solution for his jet before he could fly a planned trip. In fact, he'd rescheduled to get the work done. The need surprised him…

No, the FAA hadn't moved up the compliance date for equipping with Automatic Dependent Surveillance-Broadcast here in the US. But this acquaintance’s itinerary is an international one. ADS-B is already required along parts of his route and at a couple of stops on his itinerary. So, to go there he must equip – or find an alternative means of travel. “And I'm not of a mind to buy airline tickets,” he groused.

While some nations have no plans – or major need – to adopt ADS-B for their air-traffic surveillance needs, others opted for lead-times much shorter than the US. In fact, some airspace authorities planned earlier compliance dates before realizing that the aviation industry moves forward no faster than any underlying technology.

A Sea Change (Regardless of System Used)

The change from radar to ADS-B already operates across most of the US – at least from an infrastructure perspective. The network is operational. ADS-B brings a sea change in air-traffic surveillance with a defined benefit from airline and FAA perspectives, i.e. greater airspace capacity through precision surveillance that was unavailable via radar.

ADS-B works by requiring each participating aircraft to report its position, speed, altitude and flight direction to the FAA's network. The source of the data? A precision-navigation-system capable of outputting that data multiple times per second. Data from the navigation source are, in turn broadcast from each individual aircraft via a reporting device – a transponder with enhanced abilities.

A TSO'd WAAS GPS is the most-common source used to satisfy the ADS-B mandate, but other systems can be used – as long as they meet the performance standards required by the Technical Standards Order (TSO).

The Roots of Underlying Confusion

The ‘which-system?’ issue comes into play only for operators planning to fly IFR in the regions detailed below, where it's already needed.

The US FAA is, at this point, the only aviation authority to require ADS-B Out but allow two ways to comply – only one of which matches requirements everywhere else that ADS-B is or will be required. We’re speaking about the international standard, 1090ES – a 1090 MHz Mode S transponder with Extended Squitter, broadcasting data from an approved navigation source. The alternative option available in the US uses a 978 MHz broadcast frequency with a broad data bandwidth to broadcast all that 1090ES and Mode S can carry, and more.

Only the FAA offers free situational-awareness and weather-information tools through its unique ADS-B In services (via 978 MHz receivers).

With ADS-B In, pilots in the States can obtain free in-cockpit weather, digital Doppler radar graphics, traffic-awareness tools, and a host of text and graphic weather aids. But the US limits use of 978 MHz ADS-B Out to FL180 – 18,000 msl. And 978 MHz doesn't satisfy the mandates of the rest of the world.

So in essence, American operators flying no higher than 18,000 msl enjoy the option of equipping with 1090ES for the ADS-B Out mandate, and the added option of installing an ADS-B In receiver with either ‘Out’ solution. But if international flying is part of your operations future, going with 1090ES sets you up… well, that and possibly a letter of authorization (LOA).

Around the World in ADS-B

Australia: Airservices Australia began its staged implementation of ADS-B years ago, progressively increasing system coverage to the point that the nation has near-total coverage. The system uses a nationwide network of 29 ADS-B ground stations and 14 additional ADS-B-capable multi-lateration sites in Tasmania, and another 16 sites in the Sydney basin.

These stations today deliver continuous surveillance of aircraft operations in high-level airspace across western, central and northern Australia where radar coverage does not currently exist. Another 14 ground stations may be added to support the needs of regional airlines and General Aviation. According to Greg Dunstone, ADS-B manager for Airservices Australia:

Said Dunstone, “We plan to decommission four radars in 2017, saving money for our industry - we will use a mixture of ADS-B and radar.” Additionally, Airservices and the Indonesian Directorate General of Civil Aviation started exchanging ADS-B data between the Australian and Indonesian FIRs in November 2010.

Europe: Authorities in Europe initially opted for earlier implementation – until problems surfaced that challenged those original compliance dates (January 8, 2015 for new-production aircraft and December 7, 2017 for retrofit-installations).

In August 2014 Europe announced its delay of its ADS-B Out mandate for its airspace. With that announcement the earliest ADS-B out requirement in Europe becomes effective June 8, 2016 for new aircraft; aircraft needing retrofit now have until June 7, 2020.

Late last year European authorities also pushed back the compliance date for Controller-Pilot Datalink Communications (CPDLC). The delays put Europe on a schedule more closely aligned with the US.

Canada: ADS-B finally provided new and extended surveillance coverage to 250,000-square nautical miles of airspace over Hudson Bay in Northern Canada starting back in January 2009. Flights between Europe and North America are the predominant users of this airspace along with some traffic bound for Asia (among them flights using the defined polar tracks).

While not needed specifically for precision approach management and surveillance, ADS-B works for ATC on a tactical level, allowing reduced separation between compliant aircraft on an opportunity basis. This means each aircraft will have the appropriate protected airspace around it based on its capability. The subsequent step for NAV CANADA is to segregate airspace vertically.

Asia: Representing a mixed bag of ADS-B requirements amid vast gaps is Asia. As the world's nations and airspace authorities proceed with their trek toward a more-modern air-traffic-management system, different regions are taking different approaches. Table A summarizes a few, courtesy of Universal Weather… 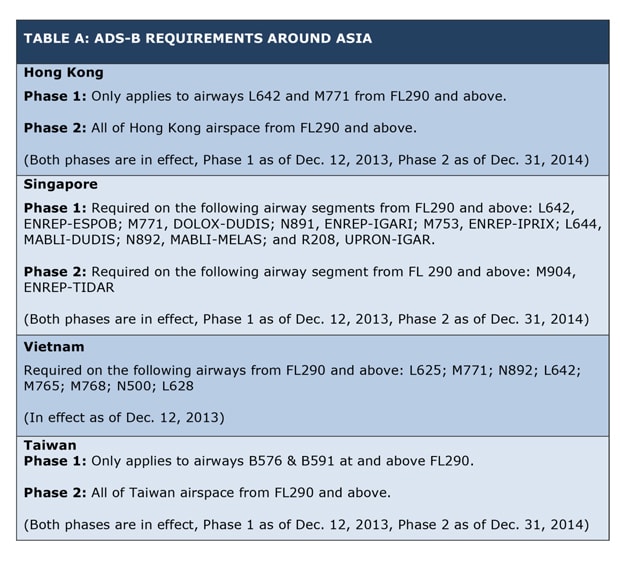 The Letter of Agreement Question

This issue can be a moving target but currently the FAA has no requirement for a LOA for ADS-B Out operations in US airspace. But requirements exist elsewhere in the world. To that end, Advisory Circular #90-114 states that all US operators must receive FAA authorization to conduct international ADS-B Out operations, either in the form of the original LOA process, A353, or its replacement from last August, A153. Regional requirements may apply, so check any nation you plan to visit.

Neither US, Australia or Fiji require an LOA for ADS-B Out operations, but that may change as ADS-B system implementation grows internationally. For example, several regions of China, Hong Kong, Singapore and Vietnam do require an LOA and, like Canada, have a conditional requirement in effect, usually based on airspace or specific routes.

The moral of this story is to plan ahead for ADS-B, domestically and internationally. After all, it's coming to the US in four years’ time.

Concerned about ADS-B? Add your voice via the Comments box below.

Find Avionics for Sale on AvBuyer.