The Guide to Airplane Connectivity (Part 4) 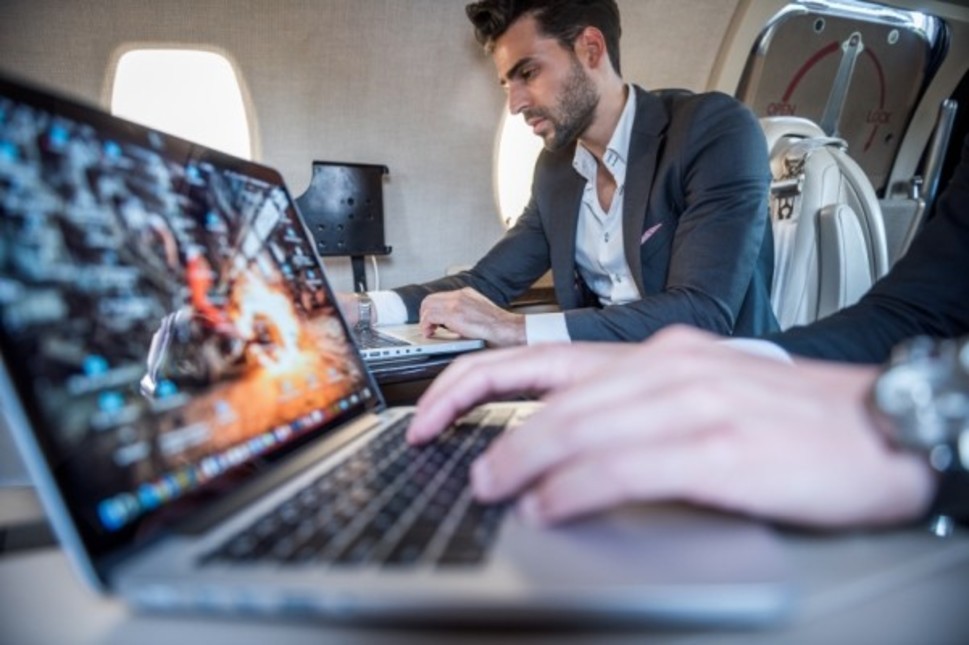 Helping you understand the technology, integration and advances of aircraft avionics and equipage, Ken Elliott continues a five-part series on aircraft connectivity, this month concluding his review of onboard connectivity.

In the previous article on this subject we reviewed an aircraft’s means of connecting, externally, to the outside world via the use of installed aircraft equipment. In this article we focus on how that same equipment turns its attention to internal connectivity. We cover how information is transferred, converted, interfaced and displayed to both passengers and crew.

Once received via a designated antenna, content is down-converted to video, voice and data. However this information needs further adapting in order to ensure compatibility with onboard devices. Included in this extra step is the need for human interface, allowing the selection of audio and visual components. 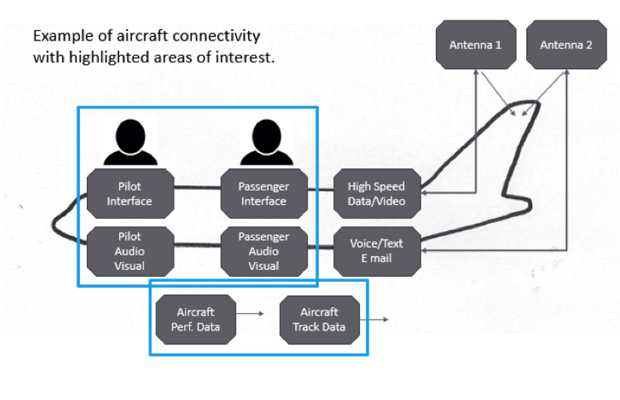 One area of in-cabin connectivity that has been brewing for years, and is now maturing is an ability for passengers to use their personal walk-on devices as a means of utilizing the aircraft’s inflight entertainment and more.

We all recall the days when even the largest of business jets relied on a few bulkhead monitors, speakers and headsets. One monitor always portrayed Airshow and the other relied on Video Cassette Recorder (VCR) input. Now jump forward, past the evolution of in-seat monitors and CD players, to the expectations of today. Envision an aircraft maintaining an option to use aircraft mounted monitors, but a preference to use what you own and are familiar with; the walk-on personal device. 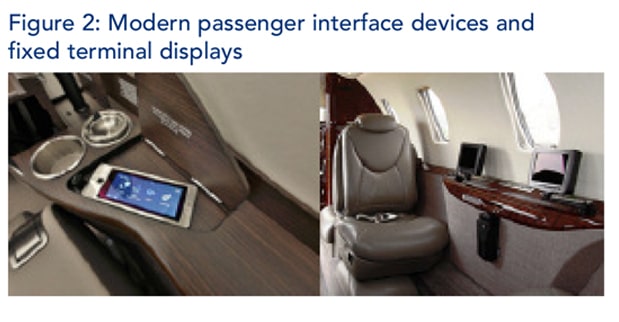 Enabling this capability is not easy as there are Apple’s iOS and Google’s Android to deal with, including different versions thereof. There is also the extent to which you may want to use a Personal Electronic Device (PED), such as an ability to control many of the aircraft cabin features, thereby reducing the need for switches, controls and wiring.

PEDs may connect the passenger into their home-office Virtual Private Network (VPN), allow video conferencing and enable streaming of TV or movies. The range limitation of the information media is set by the capability of the satellite and aircraft satcom, bandwidth and baud rate.

Today, via a satcom service provider, customers may select information speeds from Kilobits per second (Kbps) to multiples of Megabits per second (Mbps). Meanwhile using 4G ‘air to ground’ (ATG) both on the ground and during flights over terrain, bit rates of 2-12 Mbps may soon be expected. 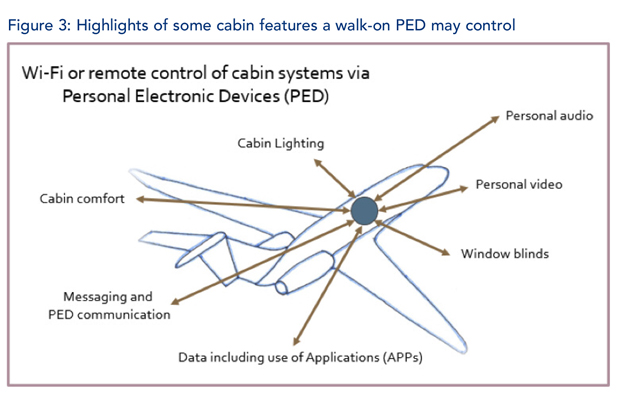 Some of the major onboard connectivity providers are:

The above connectivity provider platforms can be exotic, covering most aspects of cabin functionality. Aircraft OEMs will typically embrace these integrated platforms and, in collaboration with the equipment supplier provide brand identifiers such as Venue, Ovation or AeroWave. In those cases, the system is usually holistic, extending throughout the cabin, and even reaching into the cockpit with some of its features.

Companies like VIASAT have moved into the aircraft itself, having originated from the satellite end of things. VIASAT’s VIP Inflight Internet includes most of the aircraft equipment required, and the company can also provide both Ku- and Ka-band services on the same aircraft.

Passengers can expect somewhere near 12 Mbps speeds on their individual devices whenever the Ka-band is in use, allowing for intensive applications such as teleconferencing or video streaming. 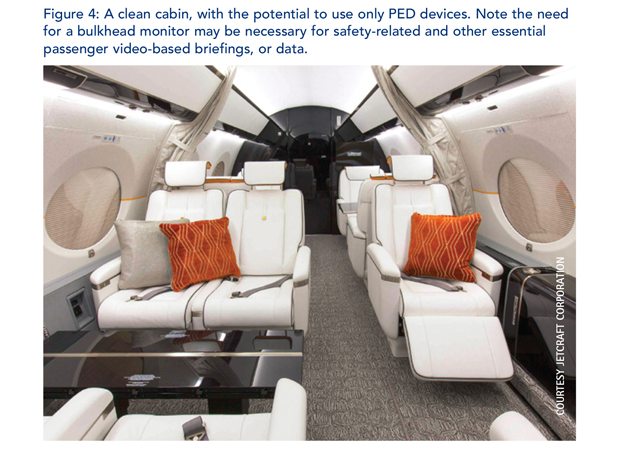 Security: Security, via encryption and other means, is essential when using the more accessible connectivity that is available today. Manufacturers are hard at work, continuously improving their protections to stay one step ahead of the hackers and intruders.

Some new onboard routers can automatically alert users when flying in certain airspaces where it is required for data to go via ground stations. This requirement increases the ability of foreign agencies to ‘see’ sensitive information.

Interference: Interference is another concern, where onboard systems must not interfere with primary aircraft operating systems. Integrators of inflight systems are subject to rigorous controls, via the Type Certificate (TC) and Supplemental Type Certificate (STC) process of certification. New systems are flown and aircraft avionics monitored for interference, both from the inflight system to avionics and the other way around.

Vulnerability: It must be understood that increasingly, we are becoming reliant on the use of satellites and they are vulnerable to meddling from unfriendly sources. As with the GPS constellation and its use for Performance Based Navigation (PBN), concerns over reliance on satellite technology for communications and connectivity are valid.

Operators acquiring aircraft that are intended for use over a number of years should include alternative equipment, such as the new SmartSky Networks 4G solution that connects via air to ground (ATG), and not via a satellite, when operating over the US.

It may sound like paranoia but a divided world still exists and a less direct-confrontational means of waging ones battles is becoming more popular. It is not such an unimaginable stretch to move from the current practice of hacking into remote computer servers, to taking control of, or altering the operation of satellites. Few wish to admit or face this daunting possibility.

Assuming that we have the downloaded information processed, an aircraft’s inflight system then needs to present to, and interact with, the passengers and crew both visually and aurally.

A plethora of devices and techniques are utilized to this end. More adapting of the audio-visual signals may be found on legacy aircraft than with new machines. Typically, the broader a single manufacturer’s technology reach is across the cabin, the more seamless the integration may actually be. A list of aircraft system and cabin devices that record, adapt, define and convert voice, video and data follows:

The following list of some of the major suppliers of recording, adapting, defining and converting equipment focuses on those companies that specialize in these fields. Many of the major avionics manufacturers include these processes in their mainline products and systems:

Note: Many of the Electronic Flight Bag and cabin & cockpit display manufacturers, also produce adapting and converting devices for their own product lines.

While there are data speeds to consider, also there is bandwidth and the ability of a system to work with multiple devices. Techniques such as data compression can allow more users to benefit from increased available bandwidth.

Another consideration is the ability to connect and remain on line, even though the aircraft is moving. That concern is centered on the antenna gain, the frequency band in use and the system functionality. However, the ability of personal devices to stay connected remotely, via Wi-Fi for example, is another aspect of maintaining a connection.

For some operators, such as those using GlobalVT from Satcom Direct, or Simphone Mobile GSM from True North Corporation, it is possible to use personal mobile phone numbers, and by default personal address books, connecting callers using an onboard router. Satcom Direct users do not incur roaming charges.

More and more the means of interface is becoming Application (App) based. The use of PEDs permits more App-based programs, including ones that control the various cabin systems. Gulfstream has three Apps that interface users with their aircraft:

Aircraft builders are now seeing the advantage of extending the onboard use of PEDs, negating the need for wiring and interface equipment, commonly known to avionic buffs as ‘Happy Boxes’.

There may be multiple satellite or ATG systems operating on a single aircraft, but users wish to use only one handset, or headset. Equally, if there is a complex cabin Inflight Entertainment (IFE) system, consisting of different sub-assemblies, operators want to use a single remote device or have the ability to control all from a single (and personal) PED.

Using a ‘single service set identifier’ (SSID), for a wireless area network (WAN), it is possible to rely on the router to select the most capable and fastest available service. Onboard services can connect outside the aircraft using multiple frequency-band methods such as Ka-, Ku- and L-Bands as well as via air-to-ground.

Newer routers can smartly allocate bandwidths to users, so VIPs may be provided with more and pilots less, bandwidth. These same routers, using SIM cards, can select GSM (3G-4G) services and save costs to the user. When selecting cabin routers, ensure they can auto-select communication services agnostically and not be forced to go to a preferred provider.

Staying with routers, ensure the router that you select can be set to prevent automatic background downloads. This common activity uses up bandwidth and ties up the PED. Most of these updates are not pre-requested and may be downloaded on the ground.

PEDs aside, there are many ways to display data in an aircraft. For the cockpit, and those aircraft not able to display paperless cockpit information on their primary displays, there are both Multi-Function Displays (MFDs) and Electronic Flight Bags (EFBs). EFBs come in three classifications, depending upon the extent to which each is mounted and then interfaces to the aircraft’s primary systems. 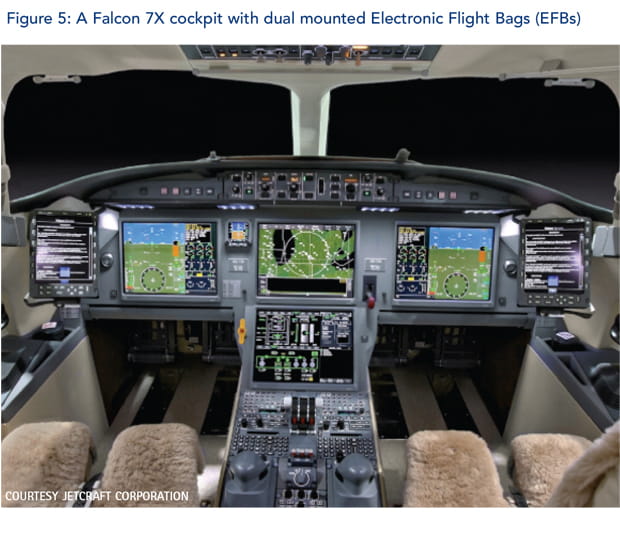 In fact, EFBs must not connect directly to primary aircraft systems, unless the means of installation has been specifically approved, such as with some Class 3 applications. To cover EFBs will take a complete article on its own, but relevant to this article is that EFBs mostly connect via a firewall unit to an aircraft’s avionics systems. An example of this is when EFBs are used to access aircraft performance data.

CMC, a popular supplier of EFBs, uses an Aircraft Information Server (AIS) and apart from its ability to connect for data, it connects to satcoms and Wi-Fi, for weather, tech logs and other pilot applications. The EFB, however, never electronically connects directly to the aircraft systems for this purpose.

For the cabin a designer can be creative, but there is still a need, and desire for, hard mounted displays in cabin bulkheads and discretely stowed monitors in the individual seat armrests. 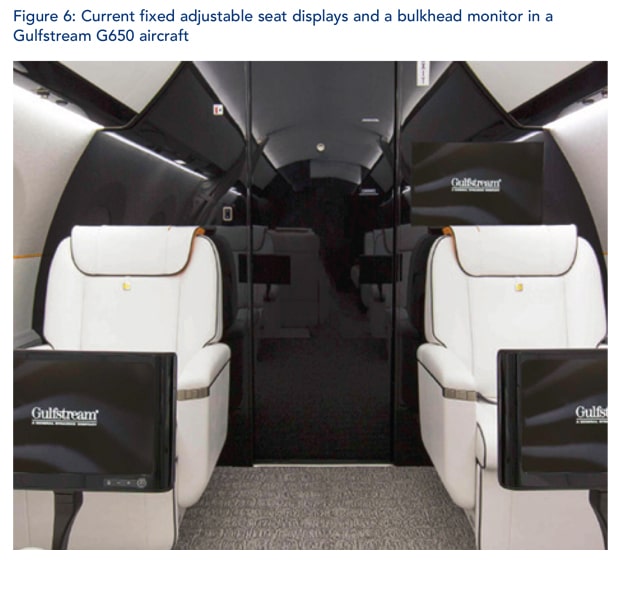 Also whereas in the past monitors were controlled by a remote controller and external switch-controls, today they are touch screen with a remote option. Some of the more popular display suppliers are:

Unseen in our modern aircraft cabin image (Figure 7) are the many connectivity devices, installed behind side walls, under the floor and above the headliner. However, the more we are able to walk onto the aircraft with personal electronic devices, the less there is a need for onboard interface equipment.

Equally the use of hard-mounted handsets and seat displays will decrease. When selecting your cabin and cockpit electronics consider the following:

All of the above concepts and systems involve some form of interaction and human interface inside the aircraft cabin. The purpose of this article was to make readers aware of these internal devices and methods used for voice, video and data, bearing in mind it would take more than a book to fully explain.

Finally remember that whatever you select for equipage, it must be certified on the aircraft, it may be obsolete or morph into another product within a few years and most important of all, it must not take away from an ability to resell the aircraft later.