Touchscreen Avionics: What are the Benefits & Challenges?

What are the benefits making touchscreen avionics so popular in today’s flight decks? And how are the manufacturers countering potential challenges the new technology brings? Mario Pierobon speaks with experts within the field…

What are the benefits making touchscreen avionics so popular in today’s flight decks? And how are the manufacturers countering potential challenges the new technology brings? Mario Pierobon speaks with experts within the field…
Unsurprisingly, touchscreen flight decks have been moving into the mainstream of avionics following the commercial success that personal electronic devices such as smartphones and tablet computers have enjoyed in recent years.
Touchscreen technology has been creating new opportunities for flight deck customization, and it’s also been helping to improve safety.
Improved Interaction with Touchscreen Flight Decks
As with all significant changes in technology, there’s a learning curve for flight crews adopting touchscreen flight instruments. Nevertheless, “…commercial off the shelf devices that utilize touchscreens have eased this technology into the cockpit somewhat,” suggests Paul Damschen, senior flight test pilot/DER at Universal Avionics.
“There are many benefits. Primarily it allows a well-designed user interface to use a limited space and present whatever information or control features are necessary to the pilots. It can be field-upgraded to add features or enhance the system or interface. It is actually far more space-efficient,” he explains.
Indeed, there appears to be consensus that touchscreen avionics allow pilots to interface with the aircraft, flight deck and its systems more efficiently.
“Touchscreen efficiencies, such as pinch-to-zoom on a moving map, allow pilots to quickly access the information they need instead of searching for the same information in several pages/chapters in an older global positioning system (GPS), navigator or flight management system (FMS),” a Garmin spokesperson highlighted.
“With the integration of tablets in the cockpit, touchscreen cockpits are a natural progression and allow pilots to more easily transition between the two.”
According to Greg Crawford, associate director, avionics system engineering, Collins Aerospace, “Touchscreens are able to open a new world of controls for the pilots much like tablets have changed the computer and cell phone industries. Interaction is now directly with the item you are interfacing with instead of finding a separate control location.
“This enables the user interface to become enhanced and directly tied to the item at hand: Type and a keyboard is provided; adjust a range and a slider is provided. Indicators can be improved for mode and selection providing a more intuitive user interface.”
By way of illustration, Universal Avionics recently received an FAA Supplemental Type Certificate for its touchscreen EFIS Control Display Unit (ECDU) for the InSight Display System.
Designed for efficiency, the Touch ECDU provides fast, easy access for InSight user control and input. Available in touchscreen or non-touchscreen versions, both ECDU models combine multiple InSight System controls, including the flight displays, FMS, radios, traffic and terrain into a centralized control device. 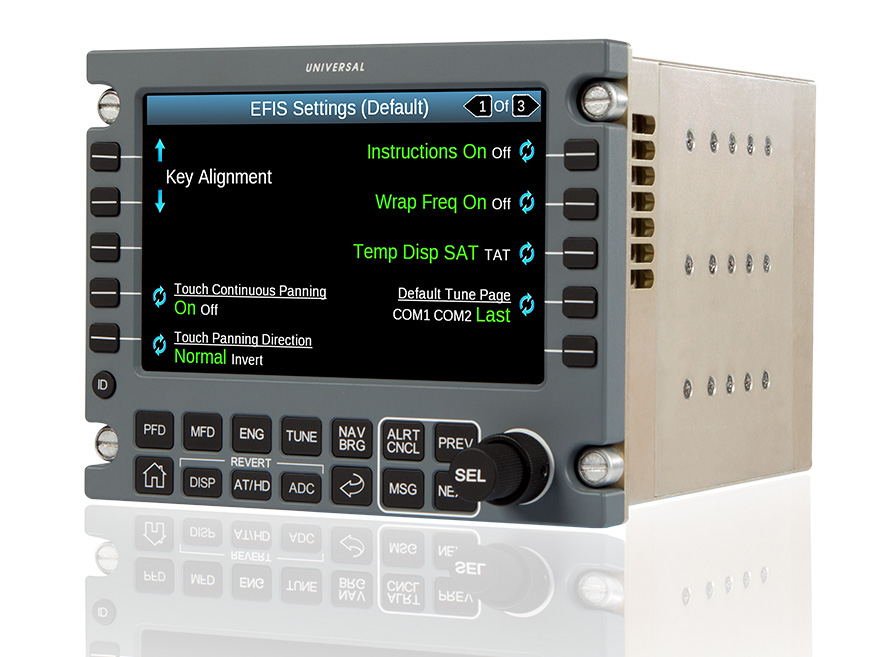 Universal Avionics' Touchscreen ECDU
“The convenience of the touchscreen technology is another step in the reduction of head-down time,” specified Dan Reida, vice president - sales, marketing & support, Universal Avionics.
Universal points out that the ECDU eliminates the need for external panels that take up valuable cockpit space by integrating with the PFD/MFD and standalone radios. And the Touch ECDU combines the functionality of the traditional ECDU with an even more intuitive interface for an enhanced, easy user experience.
Touchscreen Flight Decks: What are the Safety Implications?
Inherent to touchscreen technology are the implications for safety that might arise during hazardous situations (such as turbulence) that are stressful for pilots. Those implications haven’t been lost on the equipment manufacturers, however.
“While touchscreen can be difficult to use in turbulence, even standard knobs and controls under some conditions are hard to locate and use,” Damschen argues.
“Touchscreens do need to have provision for a hand rest or stabilization device in those conditions."
“Beyond that, touchscreens meet all of the requirements necessary for their operating environment and pose no additional issues. [In fact] most systems do have additional logic to monitor pilot inputs for incorrect or erroneous inputs.”
According to the spokesperson at Garmin, the company intentionally designs its avionics and flight decks so that pilots can utilise both the touchscreen and dedicated knobs/buttons along the bezel of the displays to perform common in-flight functions such as altitude pre-select, changes to aircraft heading, and even make flight plan amendments.
“Garmin conducts a thorough human factors assessment to ensure pilots can get to the information they need easily and with accuracy in all flight conditions,” the spokesperson adds.
“Touchscreens, in general, are no more difficult to use in turbulence provided a stable anchor point for the hand is available,” Crawford says. “Touchscreens also allow for simplified user interfaces that may walk the pilot through actions to ensure completion and proper order.
“Ultimately, they open the door to improved automation techniques that reduce crew errors and provide better feedback of automated actions to the pilot,” he concludes.