How did aircraft communications equipment evolve, how is it appraised today, and what should operators consider when they're upgrading? Jeremy Cox considers what comms equipment is worth today… How did aircraft communications equipment evolve, how is it appraised, and what should operators consider when upgrading? Jeremy Cox considers what comms equipment is worth today…
Without the ‘electromagnetic spectrum’, aviation airborne navigation and communications would be impossible. We have Maxwell, Loomis and Marconi (who performed experiments in the late 1880s) to thank for the invention of RADIO (Remote Audio Discrete Integrated Oscillations) which would eventually become so pivotal to aviation.
Of course, the first radio communications were made as ‘wireless telegraphy’ using the Morse Code, but wireless voice communications eventually became possible by moving from a pulsed transmission to a constant, stronger signal called a carrier wave at a higher frequency than the communications signal which is carried along, while the signal strength (Amplitude) is Modulated (increased/decreased) which results in ‘AM Radio’.
The US Government contracted with AT&T to develop the first aircraft radio. Frequency Modulation (FM Radio) was invented in the 1920s, and this now forms the backbone of most aviation communications systems - but now in a digital format.
In the early 1950s NATO created the International Radiotelephony Spelling Alphabet which was immediately adopted by the International Civil Aviation Organization (ICAO) and became the Phonetic Alphabet.
Aircraft Communications and Their Frequencies
It’s interesting to see where the various airborne communications devices that are employed on an aircraft today fit in to the electromagnetic spectrum. Table A lists each system, starting with the highest frequency range and progressing down to the lowest. Evaluating Aircraft Communications Equipment
When valuing airborne communications equipment in your aircraft, be prepared to accurately transcribe model numbers and serial numbers. If you fail to do so, your numbers might be significantly inaccurate.
As stated in last month’s article regarding the appraisal of avionics, the devil is in the detail. The bottom-line ‘gotcha’ with avionics appraisal is that all documentation must be minutely examined to guarantee that the actual equipment installed is what is appraised and valued.
You will find that the values, from high-to-low, will flow in the following order:
Electronics Upgrades – More than Just Equipment Cost
It is vital to remember that even though a system might have a low list price, the installation cost could outstrip the component cost many times over. Every communications system requires one or more antennas to be installed, as well as wiring, engineering approvals and more.
An aircraft belly or an entire interior may require removal for an MRO shop to gain access to areas behind the headliner or under the floor. For larger aircraft the expense for interior removal and reinstallation could exceed $100k.
Next could be the need to cut a hole through the pressure vessel skin, which must be done in a manner that does not cause stress risers, pressurization and rainwater leaks, or corrosion potential.
The same applies to antennas installed outside of the pressure vessel, except for pressure leakage. Often these installations will also require a feed-through connector that passes through either of the pressure bulkheads. 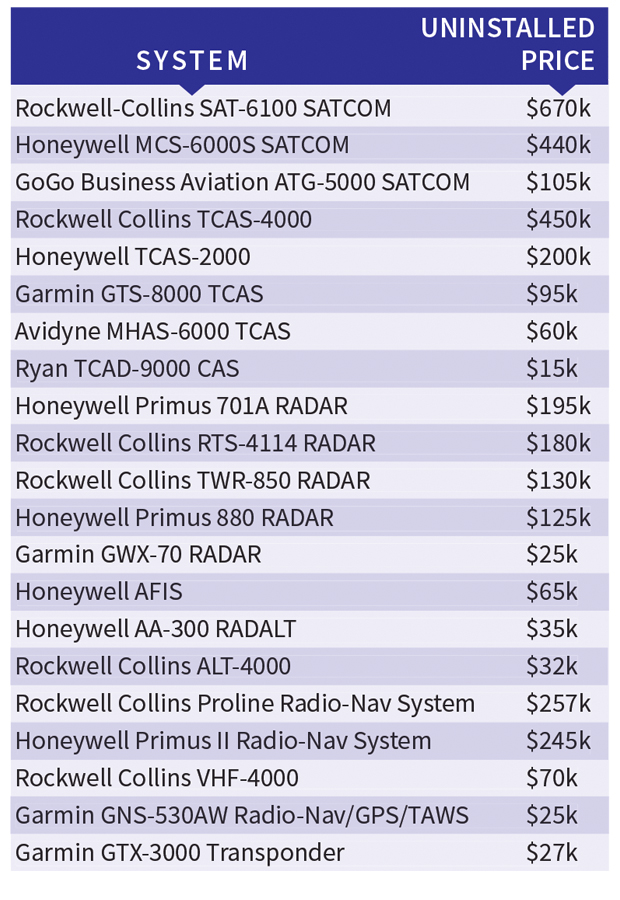 Lastly, a new system is rarely (if ever) sold as a kit with the required antennas, connectors and necessary wiring included. A fuselage mounted flat array, or vertical-fin mounted directional satellite antennas can cost anywhere between $25k-$150k depending on size, weight, frequency, wavelength, gain, wattage, purpose, manufacturer and installation approval.
The moral of the above passage is that an aircraft owner seeking to enhance the value of an aircraft they plan to sell must carefully weigh the complete cost of an upgrade in relation to any enhancement to the appraised value of the aircraft.
Often, an operator will consider extensive communications systems upgrades only when there is a clear benefit to their own operations, not necessarily simply to position their aircraft to sell for a higher price on the used jet market. A Closing Thought on Speed of Transmission
The speed of light is 186,000 miles per second. A message sent from the ground in Rosario, Argentina to a ground station in Xinghua, China (great circle distance of 12,425 miles) must be relayed by one, or more satellites positioned 22,236 miles above the Earth, thus requiring the message to travel a total 46,175.1 miles. The time delay is less than 3 x 1/10 of a second.
When we finally land on Mars, the delay could be up-to 21 minutes for the 234,878,310 miles that each message will have to travel. If you are an avid science fiction reader, you’ll be familiar with the term ‘FTL Communications’ (Faster Than Light), the science of which has not yet been discovered, and implemented. As is often said, though, “You just wait!”