Does Your N-Reg Aircraft Need To Be Exported?

Recent events in the aircraft trust industry have placed the spotlight on several legal issues surrounding the operation of N-registered general aviation aircraft abroad. One of these is the question of export… Does your N-registered aircraft need to be exported? Valiair discusses.

The first reaction of an operator or owner beneficiary of an N-registered aircraft overseas might be, “Why do I need to export my airplane or helicopter from America? It’s an ‘American’ aircraft!” While this is certainly the correct intuition as far as the FAA is concerned, it does not hold true in terms of trade…

Many people, including industry professionals with decades of experience, conflate U.S. aviation regulations with U.S. trade and export rules. A contributing factor might be that the FAA issues “Export Certificates of Airworthiness.”

The term ‘export’ here is confusing because these certificates only deal with airworthiness and aircraft certification, not trade. Export, in the economic sense, is a separate issue. Don’t fall into this thought trap!

According to U.S. export regulations, any product valued above US$2,500 sold from a U.S. seller to a buyer abroad – a transaction where ‘foreign money’ enters the U.S., and an American product (even if it was previously imported into the U.S.) leaves the country – must be registered as an export.

Again, the N-registry falls under the FAA, an agency of the U.S. Department of Transportation responsible for aviation administration and safety; while exports fall under the Department of Commerce, the department that overseas trade.

This distinction is important, because each agency has its own rules for members of the public to follow.

An Easy, Yet Essential Process

So, what is the problem with registering an export? In short, there isn’t one. Export filings are quickly done using the government’s online system. The Exporter of Record submits Electronic Export Information (EEI) and, once accepted by the government, receives a 14-digit Internal Transaction Number (ITN) in return.

Armed with this information, the parties involved can prove export rules were properly followed. The process is free, aside from the administrative fees filing agents charge, which usually come in at between US$400 and US$1,000.

There are no export duties or restrictions on civil aircraft. All in all, the process is painless if done by the right agent.

Whose responsibility is it, then, to file the export? This is where things get slightly complicated.

Generally speaking, it is the U.S. seller’s responsibility to register the export with the federal government. They, as the “U.S. Principal Party in Interest” (USPPI), or, in plain terms, the American entity benefiting economically from the transaction, are obligated to file the export.

However, many aircraft sellers, including large dealerships and independent manufacturers, aren’t aware of this requirement. Hence, our recommendation is that, as a responsible and informed buyer, you should always ask for EEI and ITN before the aircraft departs the U.S. This will save you a lot of hassle down the road.

What if the buyer takes possession of the aircraft in the U.S. and organises its ferry flight or shipment overseas themselves? In this case the responsibility to file the export may actually rest with the buyer. This type of transaction is termed a ‘Routed Transaction’, where the buyer, as the “Foreign Principal Party in Interest” (FPPI), is required to authorise an American entity to file the export for them. 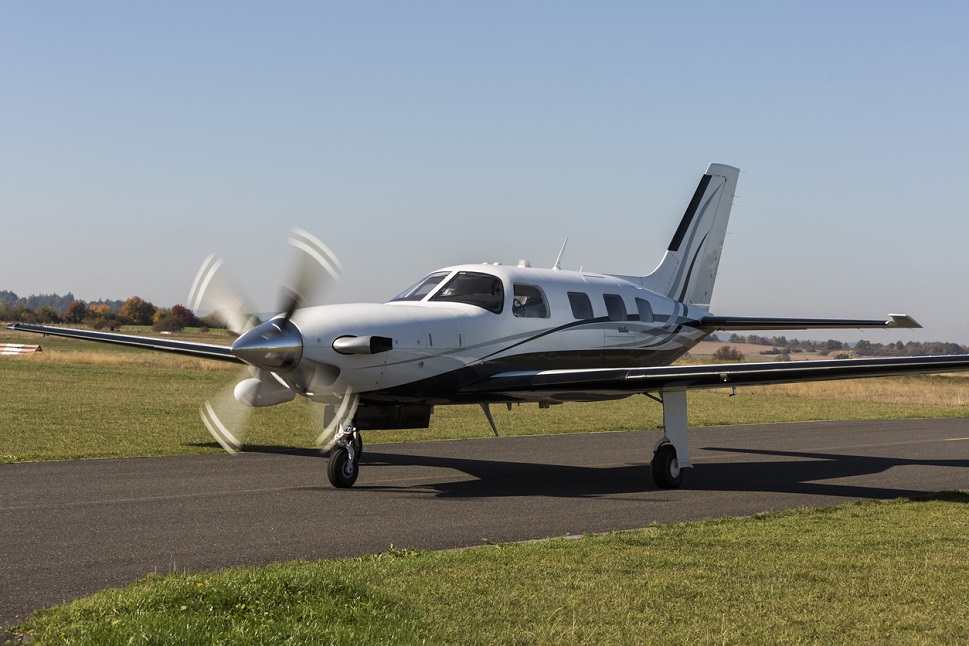 Is it Really an Export? (Canada & Mexico)

All this seems fairly straightforward when an aircraft is sold to another continent: The airplane will be based far away and rarely, if ever, return to America – so it's clearly an export. But what about aircraft sold to Canada or Mexico, that frequently return to the U.S.? Isn’t that the same as an American airliner flying back and forth? Certainly, those don’t have to be exported every time?

However, recent guidance and interpretation on export rules by U.S. federal authorities have shown this: More important than the period of time the airplane spends outside the U.S., is the intent of the exporter.

If the plan is to have the airplane primarily hangared and operated outside the U.S., a ‘Fifty-Percent Rule’ overrides the exemptions listed above.

Do 50 percent or more of the aircraft’s flights depart, originate, or take place abroad? If the answer is “yes”, the aircraft is considered permanently exported.

How does the government determine this intent? An exhibit in a trust or lease agreement listing the planned operating location is one way; hangar and FBO contracts another.

Of course, at the time of making a positive determination based on the Fifty Percent Rule it is already too late to file. Thus, again, our recommendation is to file in advance if there is any doubt.

When aircraft are containerised and shipped, the freight forwarder almost always takes care of export matters and can provide the EEI and ITN, when asked.

However, when an airplane is ferried overseas, the export filing is often forgotten about. Here, too, it would behoove the smart buyer to contact an export professional well in advance of the planned departure to ensure the export is taken care of. For an N-registered aircraft this can end up being just as important as ensuring that the import duties and sales tax are paid in the receiving country.

Why? The consequences of ‘illegally’ exporting an aircraft can be painful.

Consequences Down the Line

At face value, not filing an export is a violation of federal law and can be fined with a US $10,000 penalty. Remember — N-registered aircraft always fall under the purview of the U.S. authorities, and thus the American government inherently has leverage against the aircraft when it wants to.

But there are also second- and third-order effects: This year a large aircraft trust company came under intense scrutiny by the U.S. government. The federal authorities, among other things, began reviewing the export status of the aircraft in its portfolio and enforcing federal export requirements.

This quickly became an issue for many of the trust’s clients, because there is no legal way to register an export, years or even decades after the fact. An export must be filed before the product leaves the country.

In this case, the export that was missed a long time ago suddenly became the owner beneficiary’s problem. U.S. federal authorities wouldn’t allow FAA bills of sale to be issued and aircraft to be transferred out of the trust without the export question solved.

Clients had to deal with their airplanes being ‘locked up’ and aircraft sales falling through. All because a seemingly minor formality was neglected by other parties, a long time in the past.

Luckily the government, after months of deliberation, issued a special procedure that allows for the export of the affected aircraft to be registered retroactively, without triggering an enforcement action or fine. The right filing agent will know how to do this and can help fulfil the export requirement essential to getting these aircraft released. 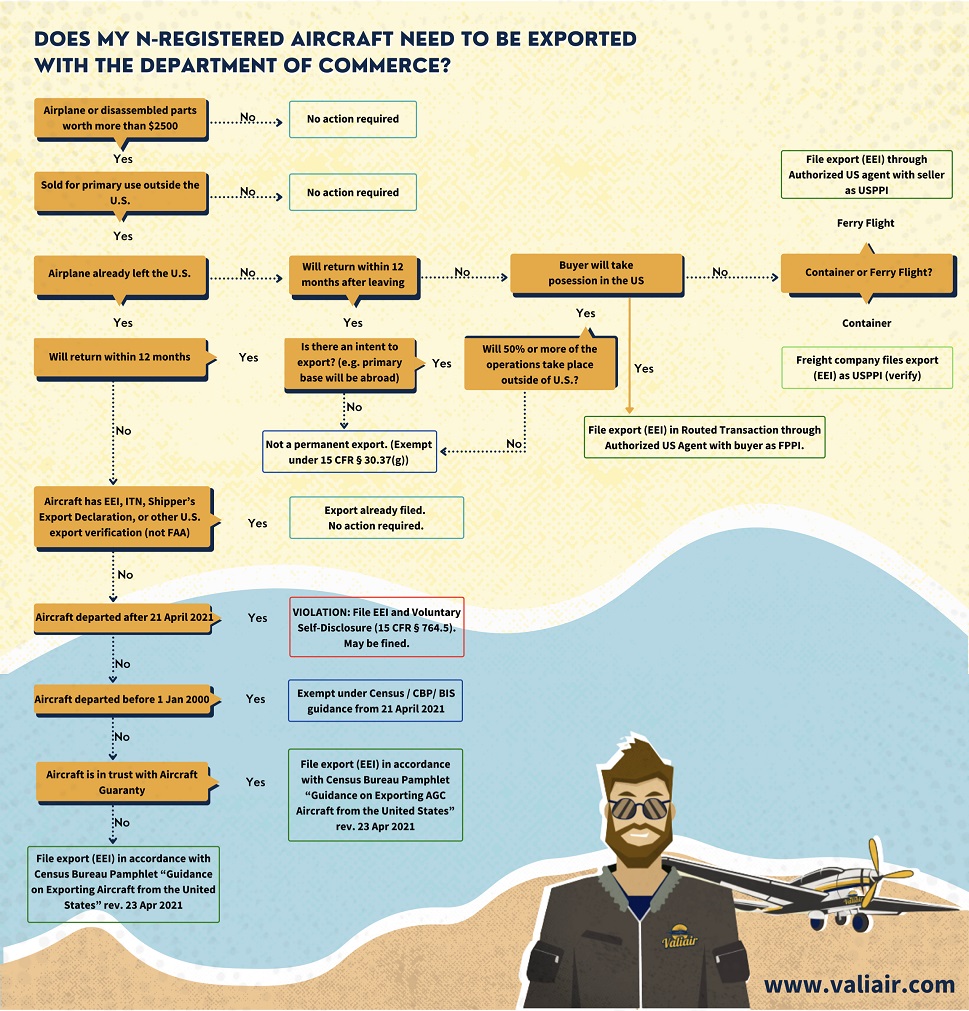 Talk to an Export Professional

However, this procedure will not apply to future exports and the U.S. government has been very clear that it will not tolerate a violation of export requirements going forward. If you are wondering whether your planned aircraft purchase will require an export filing, use the above infographic to get an answer. Then, contact Valiair, or your trusted export professional of choice, and get advice.

Considering the potential headache of not doing it, and the low cost of getting it done right, it is a no-brainer: File the export at the right time, and save yourself a lot of trouble. You’ll fly easier for it.

Who are the 'Calibrators' of Aerial Work Aviatio...
A Guide to Buying and Selling Turboprops in Afri...
What Makes Africa a Great BizAv Opportunity?