Information on the Cessna Citation Mustang, an Entry Level jet. We’ll consider some of the key productivity parameters including payload, range, speed and cabin size, along with current market value. 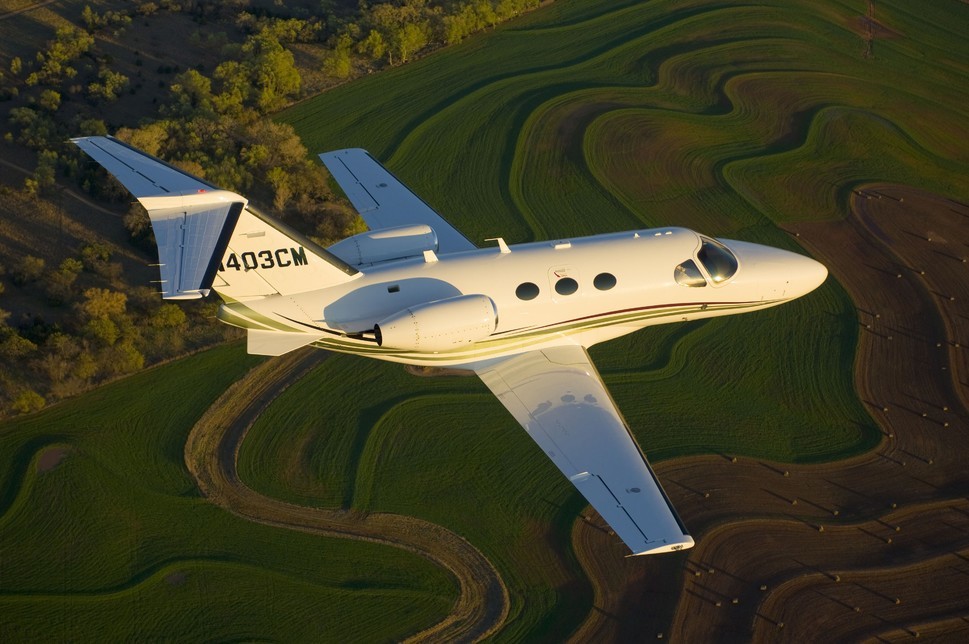 In this month’s Aircraft Comparative Analysis- we provide information on the Cessna Citation Mustang- an Entry Level jet. We’ll consider some of the productivity parameters – including payload- range- speed and cabin size- along with current market value. The field of study also includes Embraer’s Phenom 100 for sale.

The Citation Mustang is even smaller and lighter than Cessna’s first-ever corporate jet built in 1971- the Citation 500. The Citation 500 was developed to be the first affordable- Entry Level executive jet and was marketed to compete directly with the Beech King Air. Fast-forward to today- Textron Aviation now owns both the Cessna Mustang and the Beechcraft King Air.

The Citation Mustang (Model 510) was first announced in 2002- and was introduced to compete with the new breed of in-development Very Light Jet (VLJ) from Adam Aircraft- Eclipse Aviation- Embraer and Piper (among others). First flight of the Mustang occurred in April 2005- FAA Type Certification was received on September 8- 2006- and April 2007 marked the first retail delivery. 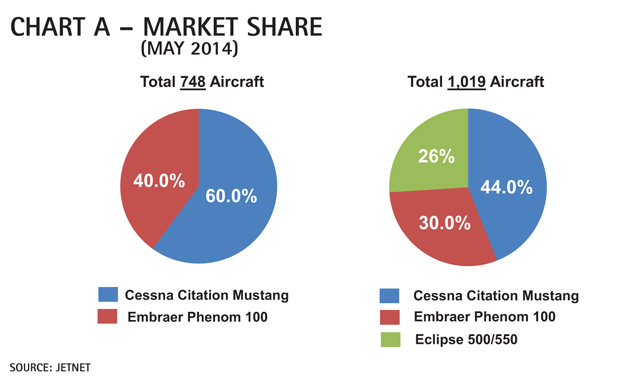 The data contained in Table A is sourced from Conklin & de Decker- and also published in B&CA- May 2014 issue. As we have mentioned in past articles- a potential operator should focus on payload capability as a key factor. The Citation Mustang ‘Available Payload with Maximum Fuel’ at 600 pounds is marginally more than that offered by the Phenom 100 (580 lbs).

However- according to Aircraft Cost Calculator (also represented)- the Mustang burns just 81 gallons of fuel per hour (GPH)- which is 35.7% less than the Phenom 100 (126 GPH). 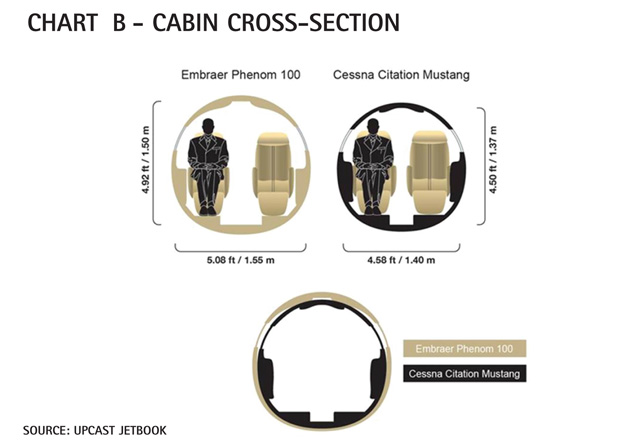 Chart C shows the circle ranges from Kansas- USA- for the business jets in this field of study- as sourced from Aircraft Cost Calculator. The Phenom 100 shows more range coverage than the Mustang. 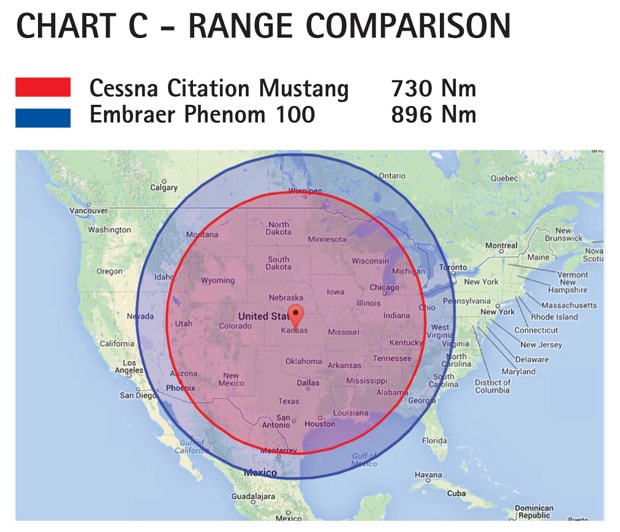 Note: For jets and turboprops- ‘Seats-Full Range’ represents the maximum IFR range of the aircraft at Long-Range Cruise with all passenger seats occupied. ACC assumes NBAA IFR fuel reserve calculation for a 200 nautical mile alternate. The lines depicted do not include winds aloft or any other weather-related obstacles.

Using data published in the May 2014 B&CA Planning and Purchasing Handbook and the August 2013 B&CA Operations Planning Guide we will compare our aircraft. The nationwide average Jet-A fuel cost in the August 2013 edition was $6.08 per gallon at press time- so for the sake of comparison we’ll chart the numbers as published.

Note: Fuel price used from this source does not represent an average price for the year. Chart D details ‘Cost per Mile’- and compares the Citation Mustang to the Phenom 100 factoring direct costs- and with each aircraft flying a 600nm mission with 800 pounds (four passengers) payload. The Citation Mustang cost at $2.46 per nautical mile is virtually the same as the Phenom 100 at $2.47. 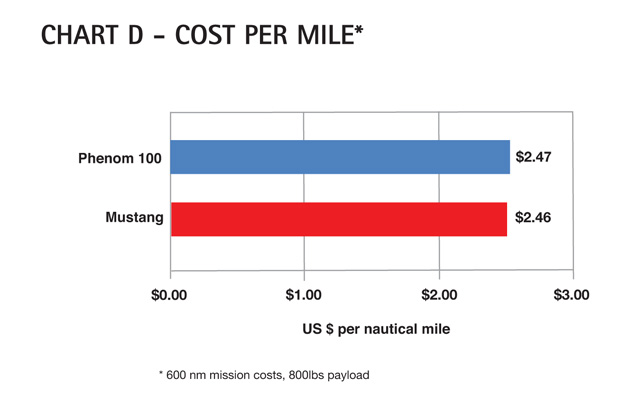 The ‘Total Variable Cost’- illustrated in Chart E- is defined as the cost of Fuel Expense- Maintenance Labor Expense- Scheduled Parts Expense and Miscellaneous Trip Expense. The total variable cost for the Mustang at $839 is virtually the same as for the Phenom 100 ($838). 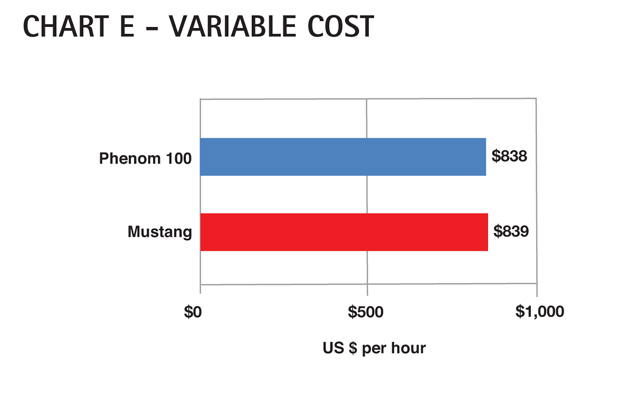 Table B represents the average pre-owned retail price from Vref for each aircraft. The last two columns of information show the number of aircraft in-operation- and the percentage ‘For Sale’- as per JETNET.

It is interesting to note that of the 447 Mustangs in-operation today (64% new and 36% used)- only 6% of the fleet is currently ‘For Sale’ (traditionally a seller’s market). The Phenom 100 is in a similar market position with just 9% of its the fleet of 301 aircraft ‘For Sale’. 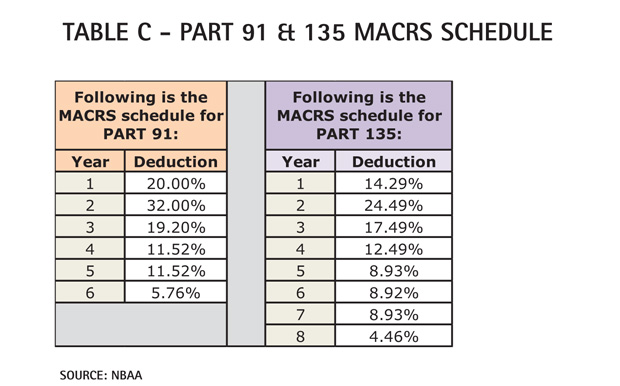 Table D- meanwhile- depicts an example of using the MACRS schedule for a 2014 Mustang in private (Part 91) and charter (Part 135) operations over five and seven-year periods assuming a Vref retail value of $3.5 million. 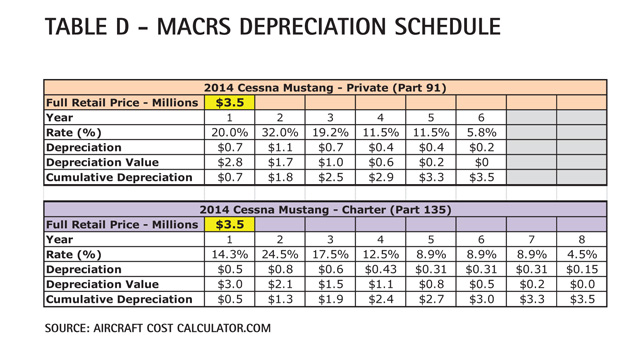 Chart F- sourced from the Multi-dimensional Economic Evaluators (MEE) Inc.- (www.meevaluators.com)- shows a Value and Demand chart for the Mustang- Phenom 100 and also the Eclipse 500 business jet. The current pre-owned market for these very light/Entry Level business jets shows a total of 92 aircraft ‘For Sale’. Forty seven of the 92 have an asking price - thus- we have plotted the 47 with asking prices. 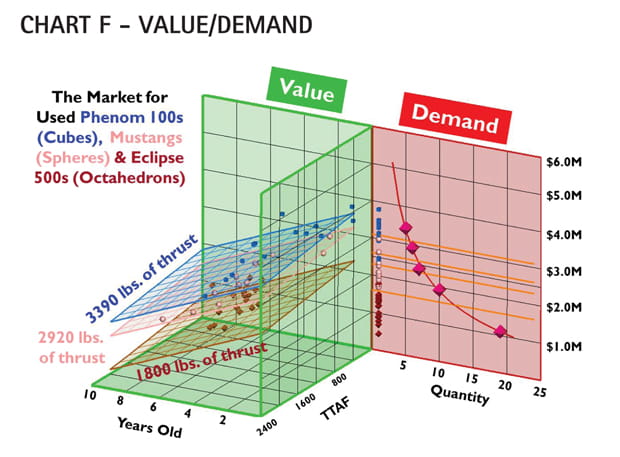 Demand and Value are on opposite sides of the same Price axis. The market treats the Mustang- Phenom 100- and Eclipse in much the same way. The Demand Equation (right side) for these vehicles is Price $m = 12.8 Quantity-0.831. The somewhat flat slope (exponent > -1.0) indicates that there is slightly more revenue in the bottom- most bin ($1m) than there is in the uppermost bin ($3.5m). This equation is very well correlated- with a R2 of 99.4% (with a P-Value of 0.0002).

The points in Chart G center on the Mustang and Phenom 100 aircraft. Pricing used in the vertical axis is as published in the B&CA 2014 Purchase Planning Handbook and Vref. The productivity index requires further discussion in that the factors used can be somewhat arbitrary. 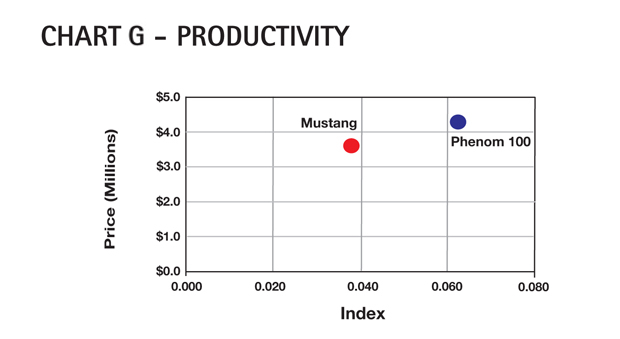 Productivity can be defined (and it is here) as the multiple of three factors.

1. Range with full payload and available fuel;
2. The long-range cruise speed flown to achieve that range;
3. The cabin volume available for passengers and amenities.

The result is a very large number so for the purpose of charting- each result is divided by one billion. The examples plotted are confined to the aircraft in this study. A computed curve fit on this plot would not be very tight- but when all business jets are considered the “r” squared factor would equal a number above 0.9. Others may choose different parameters- but serious business jet buyers are usually impressed with price- range- speed- and cabin size.

After consideration of the value (difference of $885k) and fuel savings- we can conclude that the Citation Mustang- as shown in the productivity index is productive and has been popular with a high market share having started deliveries two years earlier (in 2006) than the Phenom 100. For Available Payload (full fuel)-to-Cabin Capacity-ratio- the Mustang offers a highly competitive value to a prospective owner for whom the smaller cabin capacity is not an issue. Nevertheless- the greater range- speed and cabin capacity will weigh in favour of the Phenom 100 for some operators.

So- eight years after first delivery- what will the future hold for the Mustang? History tends to show that after an aircraft model has been in production for between six and ten years – especially one that sells as well as the Mustang has – an upgraded successor will eventually be introduced by the OEM to maintain that success in the face of the ever increasing sophistication of Business Aviation technology.

Could Cessna be ready to announce an upgrade on the Citation Mustang any time soon to keep the model attractive to the market- and retain its leading market share for unit deliveries within the Entry Level segment?

Cessna has developed the Citation M2 to keep its competitive edge. Of course- other competitors are on the horizon- too: The HondaJet is priced at $4.5 million- for example- and Eclipse has re-emerged recently with an upgrade of its own - the Eclipse 550.

Within the preceding paragraphs we have touched upon several of the key attributes that business jet operators value. However- there are often other qualities such as service and support that factor in a buying decision- but which are beyond the scope of this article. The Citation Mustang business jet has its advantages at its price-point - so those operators in the market should find the preceding comparison of value.

Our expectations are that the Citation Mustang will continue to do very well in the preowned market for the foreseeable future- but it’s worth keeping a watch out for how the new aircraft market develops. The entire story of the Entry Level market has been remarkable as it now exceeds the 1-000 aircraft delivery mark.