Pace Steps Up at Dassault 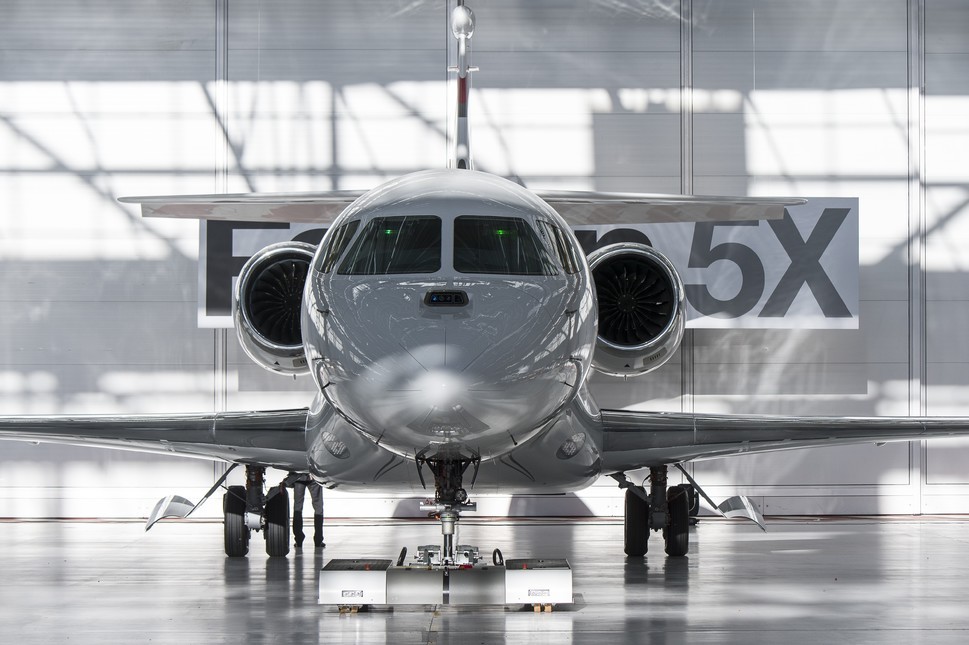 The pace of change at Dassault is breathtaking, reports Rod Simpson. The Falcon 8X was rolled out last December and now it's the turn of the Falcon 5X.

Work on the new twin-engined Falcon 5X, first announced at the 2013 NBAA Convention in Las Vegas, has advanced very rapidly and the first development aircraft was rolled out at Dassault’s Bordeaux factory on June 2nd, 2015. The Falcon 5X prototype will take to the air this summer with a further three aircraft also to be used in the flight test program. Certification is targeted for the end of 2016 with entry into service early in 2017.

The Falcon 5X fits into the middle of this range profile and, according to Dassault’s Chairman and CEO Eric Trappier, “is designed to answer an operators demand for an aircraft in the 5,000-mile range segment that could provide more space and comfort than existing large body jets while combining the handling qualities; the low-speed performance; and operating economies that are the hallmarks of Falcons.”

Falcon 7XThe result is an aircraft with a 39ft long cabin, similar in length to that of the Falcon 7X, but with 6ft 6in headroom and 8ft 6in width giving a 14% increase in cabin volume compared with the 7X. In fact, Dassault claims it has the largest cabin cross-section in the market, taller and wider, even, than the Gulfstream G650.

The cabin will be very bright with 28 windows – 30% more window area than on the Falcon 900LX – while the forward galley has a skylight in the roof to give natural light for the cabin crew.

Several internal layouts will be possible for anywhere up to 16 passengers, but the standard 12-passenger interior has three zones with a forward club-seating section, a central dining and meeting area and a rear lounge with four or five seats. Pressurisation is set for a cabin altitude of 3,900ft at 41,000ft and Dassault has paid particular attention to cabin air quality.

The Falcon 5X may have the same family appearance as its sisters, but it’s a completely new design incorporating the latest technology. Dassault’s engineers kept an all-metal structure rather than moving to composites because Falcons are already famous for their light-weight airframes that contribute to their high-performance on less power than their competitors (resulting in lower operating costs).

The wing of the 5X is a new ultra-efficient design with the highest lift-drag ratio of any of the Falcon series. With a 33-degree sweep angle and a curved trailing edge accommodating ailerons, airbrakes, flaps and a flaperon, each wing also has three leading edge slats and a winglet.

The additional flaperon is particularly innovative, and is positioned at the middle of each wing’s trailing edge.

Derived from Dassault’s fighter jet experience, this is an active high-speed surface capable of being used both as a flap and aileron. These will also provide assistance during steep approaches into airports such as London City.

As with the 7X and 8X, the Falcon 5X is a fly-by-wire aircraft using an advanced Digital Flight Control System (DFS) that commands all the control surfaces and allows them to be multi-functional.

The flight deck itself incorporates Dassault’s latest EASy III interactive cockpit based on the Honeywell Primus Epic package (including flight management system, a Graphical Datalink for communications using a point-and-click cursor and the ADS-B capable SmartTraffic TPA-100C TCAS system). Also included are dual HUDs (Head-Up Displays) from Elbit Systems that are larger than normal with a wider field of view and are able to display enhanced vision SVS and EVS displays.

Power for the Falcon 5X comes from two 11,450 lbst Safran-Snecma Silvercrest turbofans, which promise to be very environmentally friendly and have a specific fuel consumption which is 10% less than existing engines. Dassault says that the aircraft will be more efficient than its competitors, with fuel forming only 45% of hourly flying costs, and it will be able to reach Moscow from Geneva with a 10,000 lb fuel load (not possible in a Gulfstream G450 or Global 5000).

When it comes to operating range, the 5,200-mile Falcon 5X will be able to fly from Beijing to Paris, New York to Buenos Aires, or London to Los Angeles. The maximum takeoff weight will be 69,600 lbs (31,570kg) which is 5,000 lbs less than the competing Gulfstream G450.

In such a competitive market, service support and despatch reliability are of key importance, and Dassault has paid particular attention to the airframe’s maintenance and ergonomic factors. Using an interactive 3D studio, Dassault applied the skills of experienced aircraft mechanics to achieve optimum positioning of internal components. This should ensure that key parts can be rapidly removed and replaced with minimal effort.

The same design system has been employed in the cockpit to ensure that switches and other controls are in easy reach of the pilots, and there are other thoughtful touches such as the convenient bulkhead compartments to contain headsets.

The Falcon 5X is also equipped with a new on-board self diagnosis system called FalconScan that monitors all aircraft systems and collects and stores around 10,000 parameters in real time.

This means that every fault can be downloaded in flight to the central control team and preparations for remedial action can be made prior to landing.

One can only be impressed by the amount of thought that has gone into design of the Falcon 5X, and Dassault deserves to be very successful with this new state-of-the-art business jet.