Do some of the terms and abbreviations in the aircraft for sale listings leave you scratching your head? Ken Elliott provides in depth understanding of what they represent, and how they are used to establish the aircraft's pedigree...

In this series, Ken Elliott delves into the complexities of the terms used by aircraft brokerages in advertisements to distinguish their inventory from other aircraft on the market. This month, the focus is aircraft options and enhancements…
There are several areas of interest for an aircraft transaction (as represented in Table A) that are focused on the aircraft type and model chosen. Last month, we addressed the following: Aircraft Primary; Aircraft Times and Cycles; and Programs. 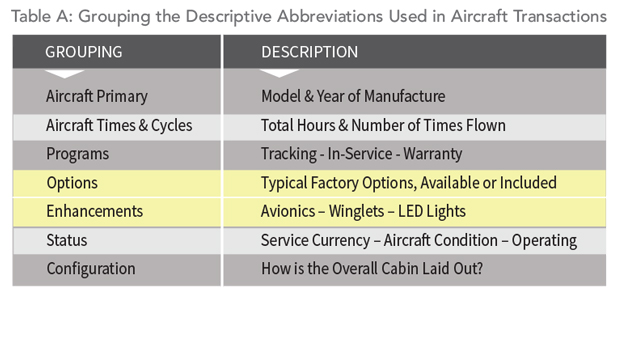 Here, we’ll take an in depth look at ‘Options’, including typical factory options that may be available or already included on the aircraft for sale, and ‘Enhancements’, such as winglets or LED lights.
Aircraft Options
For the purpose of this article, ‘Options’ refers to additional aircraft capability, beyond the baseline, that is offered on new aircraft. The following is a typical example, selectable as a technology option or even as part-option by most OEMs on a broad range of aircraft types.

In this case, LPV-SBAS-PRNAV covers a suite of navigation capabilities allowing aircraft to use most routes, approaches and departures available in the airspace (see Table D and E, below). While some options are ‘nice to have’, others are subject to where and how you intend to operate your newly acquired aircraft.
Some options are generic, some are very specific to aircraft model (such as winglets) or to the equipment manufacturer (e.g. Honeywell’s SmartRunway and SmartLanding). Even generic options can have aircraft-specific components, however, which dramatically impact pricing and installation.
This latter situation has enabled competitive and creative alternative solutions from third-party vendors in the marketplace.
Furthermore, as new technologies mature, become more commonplace, and gain greater acceptance in the market, OEMs tend to move them from being ‘optional’ to ‘baseline’.

Options are important to consider because many will enhance an aircraft’s performance and, by extension, enable operations in areas where unique airspace conditions exist.

Regional specific options will also likely add to the aircraft’s resale value, as there’s a tendency for potential owners to look for similar aircraft to those already being operated in a region, if the overall missions appear to be similar.
Comments:Do not ignore past factory options, when presented. It will be significantly more expensive to add them later, once you realize they’re needed to fulfil a mission.
If you have a strong inkling the aircraft will need to operate under unique localized or oceanic/remote operating rules in the future, consider including factory options at the initial purchase stage. 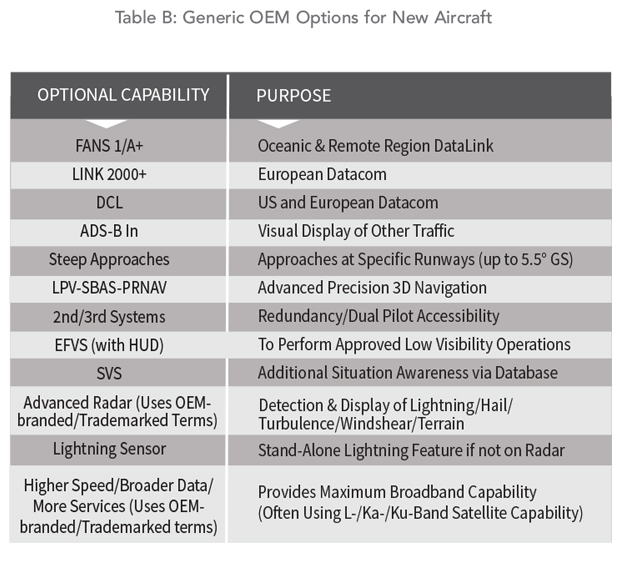 And don’t be surprised to see some capabilities in Table B (above) and Table C (below) that are currently listed as optional, listed as baseline when you consider your next aircraft purchase. Sometimes baseline changes occur midstream, during an aircraft model overall production lifecycle. 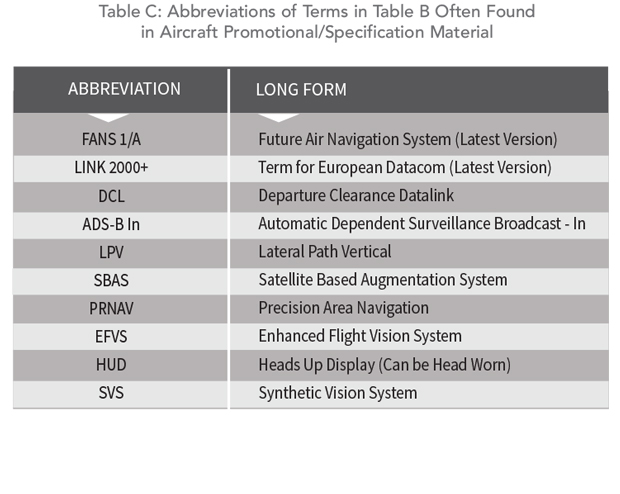 It’s worth keeping an eye on OEM announcements, marketing material and other user intelligence in this respect.
With reference to Tables B and C, there are significant technology variations and sub-systems underlying some of these capabilities. For example, under FANS 1/A the following systems will need to conform:
In turn, some of these same systems are critical for other capabilities, such as the version of FMS required for Steep Approaches. Again, it’s so important to take a close look at Factory Options, when purchasing a new aircraft, taking full advantage of the cross-pollination of equipage levels to capability.
Finally, do not overlook the services required to operate the equipment options you have selected.
These range from databases to satellite, or from weather to charts. Obtaining the maximum utilization from your new capability, via the right Service Provider, is as important as the equipment selection itself.
Enhancements
For the purpose of this article, Enhancements refers to new capabilities or upgrades available to an aircraft, post-delivery. Several new aircraft option technologies listed in Tables B and C are also offered to the pre-owned market.

Naturally, because the pre-owned market is so broad in scope and vast in size, there is an exponential increase in the availability of choice. This market plays host to a number of niche third-party providers, some of whom directly compete with the major aircraft and avionics suite OEMs.
Jet and Large Turboprop avionic equipment OEMs that provide full avionic suites are few in number, and includes:
There are many more companies focusing on specific technology groups, as listed in Tables B and C, and especially in Tables D and E. 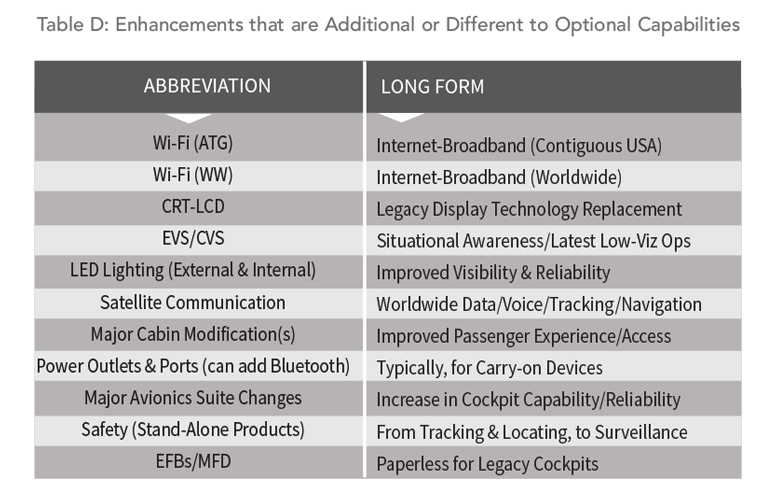 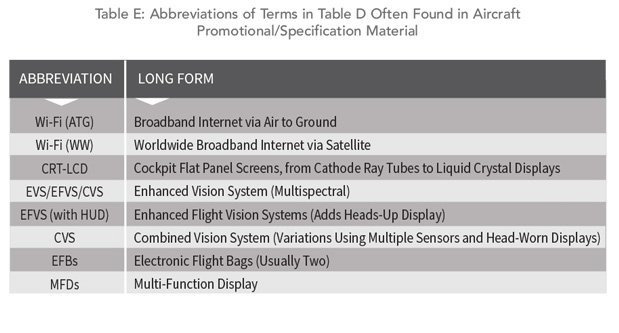 Comments: When considering an upgrade, look for the ability of the enhancement to adapt to changes. As more aircraft fill our airspace, operating rules adjust to accommodate, maintaining safe separation.
This, is turn, drives hardware and software modifications in aircraft. Further, regional operation-dependent mandates (like Oceanic FANS) are introduced in phases, broadening the airspace over time, that will fall under new rules. Ask the MROs and OEMs to explain the long-term redundancy of their offerings.
Next Time…
In our concluding article next month, we will delve into abbreviations used for aircraft Status and Configuration.
Read Buying a Jet? Understand the Ad Abbreviations (Part 1)
Read Buying a Jet? Understand the Ad Abbreviations (Part 3)
Disclaimer:The summaries and tables provided within this article are NOT fully inclusive and are meant to provide those abbreviations commonly found. It is not possible to include all of them here. It is assumed this article will help guide the reader to seek further information by knowing where to begin within the complex architecture surrounding an aircraft transaction.

Upsizing Your Jet? Here’s How to Manage the Proc...
Buying a Jet? Understand the Ad Abbreviations (P...
How to Build a Business Aircraft Acquisition Pla...