How Does Aerial Work Aviation Feed the World?

Have you ever heard the phrase 'When Pigs Fly'? Well, there's something genuine and relevant to that old saying. Aerial Work aviation is a critical part of fortifying the agriculture industry to produce more food to feed the world today and beyond!

When people think of agriculture and farming, they think of farmers and ranchers growing crops and herding animals alone. However, if you look in the sky above these farms, fields, orchards and pastures, you'll see a variety of manned and unmanned aircraft conducting specialised services to aid farmers and ranchers.

Their services help the agriculture industry in producing a secure, affordable, and ample supply of protein, fiber and biofuel, in addition to protecting forest and controlling health-threatening pests.

With farmers and ranchers there is a critical need to deliver more food, increase efficiency, all while making sustainability a priority.

Aerial Work aviation has expanded tenfold, both in capabilities and technology, to support this critical area of sustaining humanity.

Because both manned and unmanned aircraft can travel faster, farther and over unimproved terrain better than land-based vehicles or horseback cowboys, they provide a critical capability for the agriculture sector to counter the tyranny of “time” and “distance.”

The time and distance factor in growing crops and managing livestock is a significant variable when it comes to doing “what”, “when” and “where” at the right point of the agriculture production cycle. If the timing is off, it could mean the difference between financial success and failure.

The critical support Aerial Work aviation provides to mitigate the worries of farmers and ranchers regarding the tyranny of time and space includes collecting and processing field data, along with “spraying, seeding and herding” in a cost-effective manner.

Data collection and processing is the most significant net contributor Aerial Work aviation provides the agriculture industry, especially when you count the explosion of unmanned aerial services and technology capabilities available to farmers.

Because the agriculture sector has a never-ending need to know what is going on above, within and below their crops, utilising leading-edge aerial sensors and data processing technology can allow farmers (and ranchers) to know much more than their forefathers ever did. When it comes to wanting to know more, the main areas of interest for farmers and ranchers are soil and field analysis, crop monitoring, and the health of their domain.

Aircraft with specialised sensors can be critical at the start of the crop cycle. They can collect and create precise 3-D maps for initial soil analysis, which are useful in planning seed planting patterns. Additionally, this information can help with irrigation and nitrogen-level management throughout the crop cycle.

Planes with hyperspectral, multispectral, or thermal sensors can identify which parts of a field are dry or need improvements. Additionally, once the crop is growing, additional flights allow the calculation of the vegetation index, which highlights the relative density and health of the crop, and will also show the heat signature and extent of energy/heat the crops emit.

Besides analysing and monitoring the standard crop growing cycle, it's critical to assess crop health and spot bacterial or fungal infections on trees. By scanning a crop with aerial sensors, farmers can track changes in plants and indicate their health. If disease is discovered, farmers and ranchers can apply

On the traditional side, Aerial Work aviation supports the agriculture sector by spraying, seeding, and herding. Aerial Application (spraying and seeding or crop dusting) and aerial animal herding (mustering) continue to play a significant part in maintaining the health and growth of both plants and animals in the agriculture industry.

When it comes to spraying and seeding from the sky, Aerial Application provides the seeds, fertiliser, and treatments to control weeds, insects, and fungi. It is used on both conventional and organic crops. Aerial Application is also used to treat forest land, range land, and pasture land.

As an interesting side note, the Aerial Application sector also leverages their aerial capabilities to fight and prevent the spread of wildfires and protect human health by controlling mosquitoes that carry West Nile fever and Zika virus and other harmful diseases.

When it comes to managing livestock, Aerial Work aircraft are used to herd or muster cattle, identify sick or lost animals, deter livestock predators, and monitor vegetation and water supply conditions. Nimble aircraft like rotary-wing platforms provide the perfect level of versatility to operate at a low level and at rapid variable speeds that traditional cowboy ranching methods cannot.

To highlight the benefits of employing aircraft in herding or mustering livestock, experienced agriculture pilots can locate a herd and guide them to the corral within an hour. In contrast, horseback cowboys would take weeks to achieve the same result. 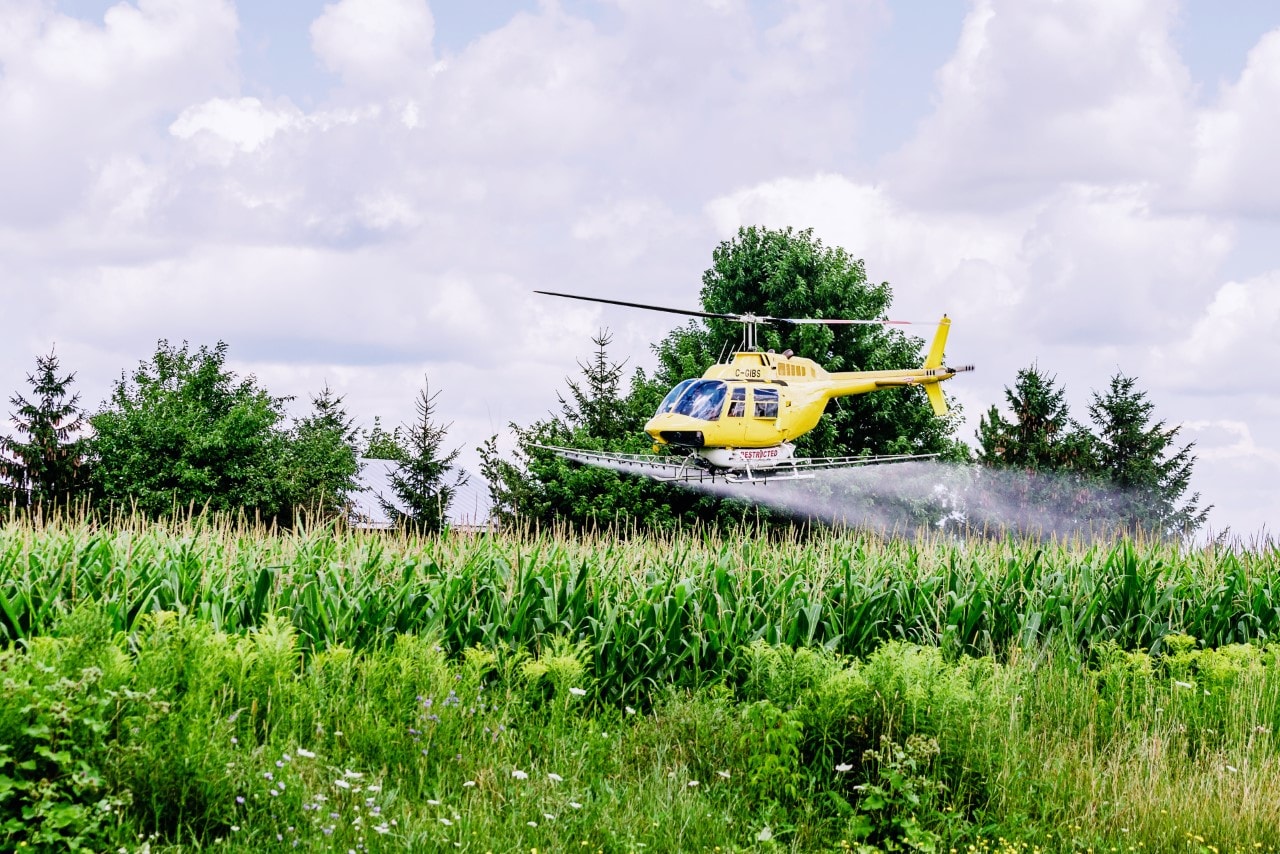 “Aerial Work aviation has expanded tenfold, both in capabilities and technology, to support this critical area of sustaining humanity.”

What Aircraft are Used?

Within these two manned and unmanned classes of aircraft, the majority are either specifically designed and built for agriculture use or are modified for a particular task, i.e., "spraying, seeding, and herding" or "data collection and processing."

In the manned aircraft arena, the dominant aircraft types are either single or twin-turbo STOL/heavy-lift airframes or modified rotary-wing platforms. In the task of spraying and seeding, the most common aircraft (a.k.a. “Agriculture Aircraft”) are fixed-wing, such as the:

Regarding herding or mustering livestock, nothing beats a helicopter. As mentioned before, helicopters can maneuver like a cowboy riding horseback but with many more numerous advantages. Some of the most popular cost-effective but effective helicopters used today for aerial herding are:

Without a doubt, unmanned Aerial Work aircraft are expanding in their support of the Agriculture sector. The unmanned aircraft industry sector is "Double-Downing" on its efforts to supply farmers and ranchers the required data collection and processed information to make a difference between success or failure.

Like the manned aircraft sector, the unmanned sector is currently expanding in flying the skies over farms, orchards, and ranges with both fixed-wing and rotary-wing aircraft, but on a much lower and smaller-scale - "for now."

Depending on the scale of the project, the current leading providers of data collecting platforms in the unmanned aircraft OEM sector are:

The next time you’re driving through the countryside, don’t be surprised to see an Aerial Work aircraft hard at work. With the world’s population ever-increasing and more mouths to feed, farmers and ranchers are under pressure to produce more and in a sustainable manner. With this demand, Aerial Work aviation is a perfect partner to support farmers and ranchers in mitigating their issues with "time" and "space”.

When it comes to the future, Aerial Work aviation will expand beyond its core work of data collection and aerial application. With unmanned technology and capabilities ever developing, we’ll see new applications or tasks that were traditionally done by man, tracker, or truck in the agriculture production cycle, i.e., transporting equipment to-and-from the fields, harvesting, and more….

So, if you ever hear someone say it could never happen that specialised aircraft and highly skilled aviation professionals can help feed the world, you can genuinely tell them that “Pigs do Fly!”

How does Aerial Work Aviation Entertain You?
How Luxaviation is Using Drones for Vineyard
What is a Multi-Mission Aircraft?