Earlier this year, a client reached out to us to assist him with the purchase and acquisition of a 1980 King Air F90. The aircraft was located at the Van Nuys Airport (KVNY) near Los Angeles, California. Here's the story that unfolded with the pre-purchase inspection...

The buyer, an American living and working in South America, was unable to see the aircraft prior to making the purchase and asked us to be his eyes and ears onsite with the aircraft. Before diving into the details of this airplane, let’s discuss a brief history of the King Air 90 series.

Best of all, the F90 has a pair of PT6A-135 engines, delivering 750-shaft horsepower each and a handsome set of four-bladed propellers. The extra boost in power translates to an increase in gross weight of 10,950 pounds, cruise speeds in excess of 250 knots, and range of over 900-nautical miles. The aircraft can cruise up to 31,000 feet and typically burns about 100 gallons of fuel per hour.

The cost per mile is less than the both the C90, due to its increase in cruise speed, and the King Air 200, making it a perfect airplane for owners that need the added performance without the added cost. In fact, the aircraft was in such high demand, it competed with the King Air 200, so Beech ceased production in 1985 after 196 aircraft were built.

The aircraft we were hired to evaluate was a 1980 King Air F90 with an early serial number. In fact, it was one of the first King Air F90s ever made. At first, we were not sure what to expect; would the aircraft be a good deal or a total disaster? After just a few hours vetting the aircraft, the answer to that question became very clear.

Let’s start from the beginning.

We take a step-by-step approach when making an aircraft acquisition. Typically, the prepurchase inspection is the most critical and time-consuming portion in the purchase process.

The first step began from our headquarters in Ocala, Florida. We started by gathering background information on the aircraft by auditing the aircraft’s title and ownership history as well as its major repair, major alteration, and STC history. Because the aircraft was going to be exported, it was imperative that all modifications to the aircraft were accounted for, from avionics upgrades and engine mods, all the way down to aftermarket lights and brakes.

After completing the first step in the process, we learned that this King Air F90 had received a total of seventeen upgrades over the years, including the installation of dual Garmin G600 PFD and MFD units, Garmin GTN-750 touchscreen GPS, and GTX-345R ADS-B transponder.

Additional modifications included the installation of the popular Blackhawk engine mod which replaces the stock PT6A-135 engines with PT6A-135A engines, delivering more efficient operating parameters and higher cruise performance. We also learned that the aircraft had a clean title with no liens and the current owner has owned the aircraft for the past eight years. 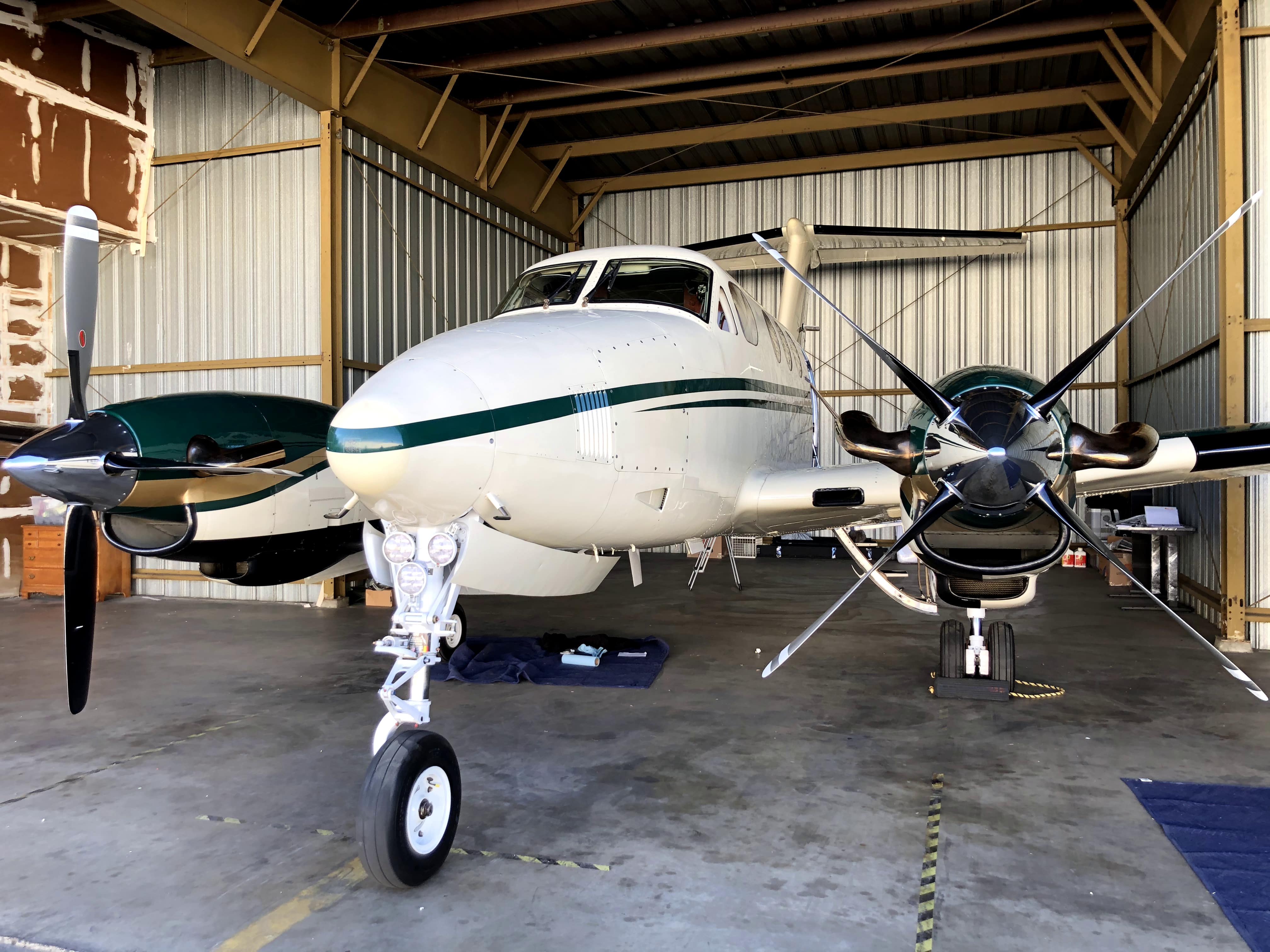 Accomplishing this prodigious task meant carefully combing through every logbook entry page by page, line by line, and examining piles of loose documents including workorders, invoices, maintenance releases, STC paperwork, and parts tags. In this particular instance, the aircraft was not on any type of maintenance tracking program such as CAMP or SierraTrax, so we had to manually verify the maintenance and inspection status of the aircraft which contained over 50-line items of required inspections, overhaul intervals, and life-limit parts as well as an additional list of almost 60 Airworthiness Directives (ADs).

In my experience, the quality of the maintenance records is proportional to the quality, condition, and pedigree of the aircraft itself.

Once we had a solid grasp of the aircraft’s inspection status and maintenance history, it was time to finally see the airplane in person. The next step in the process was performing a test flight with the owner to determine engine performance, systems health, and avionics function. The objective of the test flight is to find any “big dollar” defects could make the airplane a bad buy.

Every system was checked, both on the ground and in the air, from air conditioning and pressurization to engine parameters at various flight segments and all the avionics. Before landing, we shot several fully coupled instrument approaches to make sure all instruments were working correctly and that the autopilot captured the approach course and glideslope as expected. No stone was left unturned.

The aircraft passed the flight test portion of our evaluation with flying colors. The last step in the process was to perform a nose-to-tail examination of the airframe and engines for corrosion and cosmetic defects as well as structural and mechanical integrity. In total, it took us two full days, another 40 manhours, to complete the physical examination of the aircraft. Again, no stone was left unturned.

During the engine borescope inspection, we noticed some light sulfidation, a form of corrosion, on multiple compressor turbine blades of the righthand engine. While not necessarily alarming or unusual, it is an indication that the engine should undergo more frequent compressor washes as recommended in the PT6A-135A maintenance manual.

However, we did find a  defect with the righthand engine that was a little more alarming. We noticed a small crack in the power turbine stator vane on the inboard section of the righthand engine. Fortunately, we determined the crack was well within limits and did not require immediate action. We advised the client to monitor engine performance and perform a borescope inspection every 12 months to ensure the crack does not progress.

All told, we found about 60 squawk items of varying severity and our final report was 45 pages long. Once the pre-purchase inspection was complete, our role shifted to helping the prospective buyer determine whether to continue with the purchase of the aircraft and how to further negotiate which squawks will be repaired by the owner and which should be deferred.

Overall, we were impressed with this aircraft’s pedigree, condition, and performance. As such, we gave it a clean bill of health and a thumbs up to our client. The previous owner took excellent care of the aircraft and he’s also a great pilot.

A quality owner is just as important as a quality airplane. As for our client, he was extremely easy to work with and pleased with the aircraft. He took delivery several weeks later and has been accumulating many hours of happy flying.

You can also check out their aviation podcast about aircraft ownership by searching for the “Airplane Intel Podcast” on all major podcast players or subscribe to their growing YouTube channel @ www.YouTube.com/AirplaneIntel.

What's it worth? How to Value an Airplane (Part ...
Aircraft Maintenance Records: Is Your Asset Cove...
Buying and Flying the Cessna Citation Mustang