Dassault Falcon has been a significant force in the business jet world since the mid-1960s, with a particular focus today on the Large Jet (large cabin and ultra-long-range) markets.

Dassault Aviation has made significant inroads into the ultra-long-range business jet market, notably through the Falcon 7X, which entered service in 2007. With a range of about 5,870nm, the aircraft typically accommodates up to 12 on trans-continental trips, and was notably the first purpose-built business jet to be fully fly-by-wire. 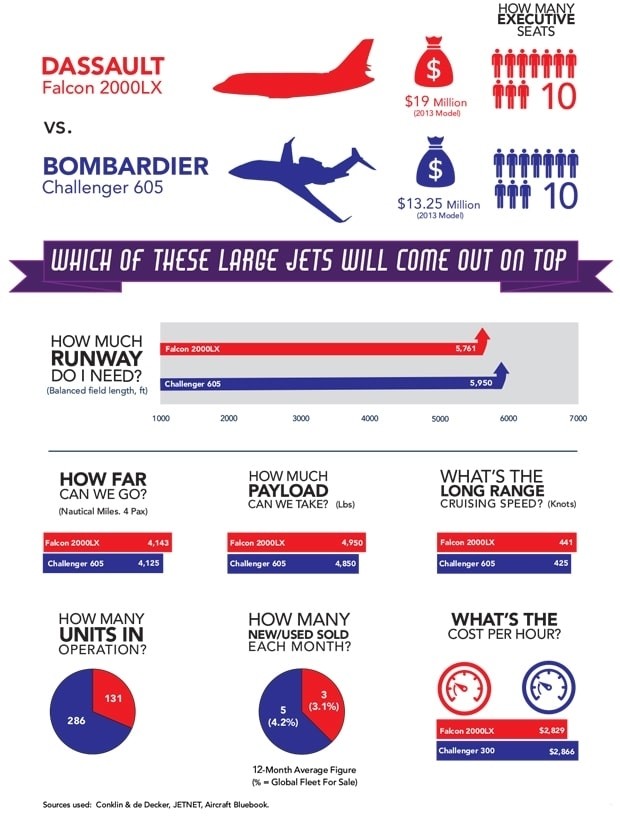 Similarly, the Falcon 50 was a longer-range, Super Mid-Size Jet that stemmed from the Falcon 20. This 3,200nm-range aircraft was also Dassault’s first tri-jet, featuring three TFE731-3-1C powerplants. Boasting a similar fuselage cross-section and capacity (typically nine passengers) as the Falcon 20, it incorporated an advanced wing design and required shorter take-off and landing distances.

The Falcon 50 was further developed through the Falcon 50EX in the 1990s, which extended its range.

The Falcon 900 Large Jet was originally launched in the 1980s and remains on the market today, having gone through a range of adaptations, including the Falcon 900B, Falcon 900C, Falcon 900EX, and Falcon 900EX EASy, bringing a number of advances in power, range and avionics to the model. A shorter range Falcon 900DX variant was also produced. The aircraft has a capacity of up to 19 passengers.

The current production variant is the  Falcon 900LX, which was launched in 2008 and includes blended winglets, and reaches 4,750nm at long-range cruise with six passengers and two crew members. The 900LX is powered by three Honeywell TFE731-60 engines, features an EASy II Flight Deck, incorporates the Honeywell Primus Epic System, and has a maximum take-off weight of 49,000lbs.

The Falcon 2000, meanwhile, was a twin-engined, slightly smaller development of the Falcon 900 tri-jet, with inter-continental range (up to 4,000nm). The cabin is typically configured for 10, and the original powerplants were CFE738-1-1B turbofans.

The current Falcon flagship jet is the Falcon 8X. This ultra-long-range jet can fly up to 6,450nm with eight passengers and three crew, though it can hold up to 16 passengers. The aircraft features three PW307D engines and an EASy III Flight Deck with Honeywell Primus Epic System.

Dassault is also looking to the future, and the Falcon 6X – a 5,500nm-range aircraft – is due to begin deliveries in 2022. Like the Falcon 8X, it will be capable of accommodating 16 passengers.

With over 25 years of trading, AvBuyer is the primary marketplace for private jets, offering the best new and pre-owned jets for sale. You can read the latest edition of AvBuyer magazine online or visit our online actionable intelligenceresources which offer insight, market data and analysis from AvBuyer’s editors and leading Biz Av industry experts.