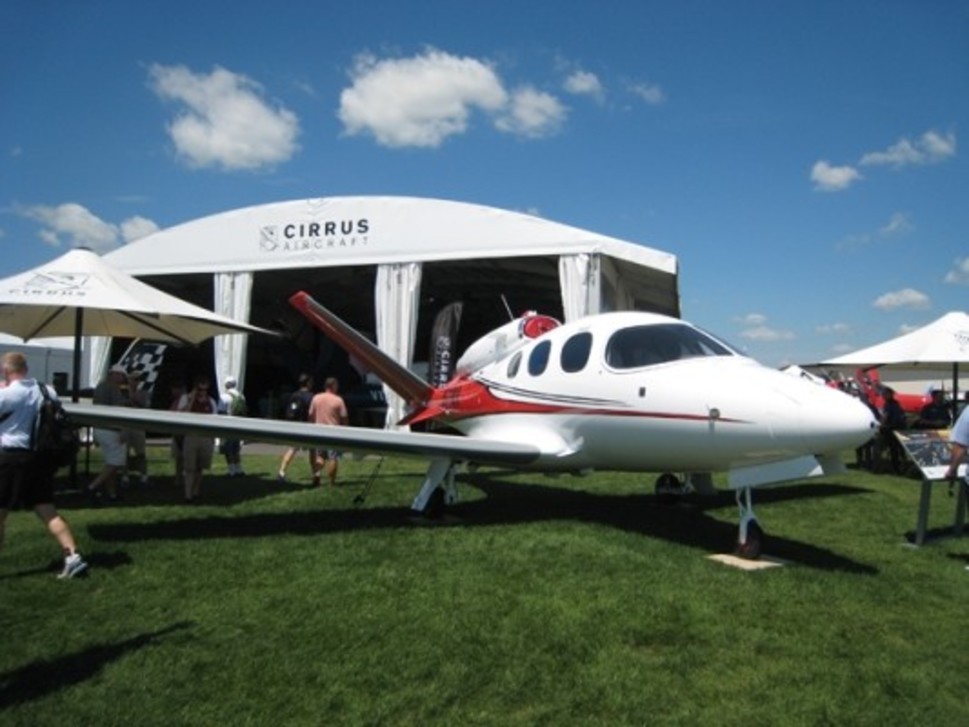 The experimental and developmental elements of Business Aviation fit perfectly into the scene at EAA AirVenture Oshkosh, notes Dave Higdon. Following is a review of some of those companies displaying their wares at this year's show…

More 20 years ago Cirrus Aircraft succeeded where critics said it would fail with its SR20 piston single. This year Cirrus once again exhibited evidence of how it sometimes pays to ignore conventional wisdom. Two of its ground-breaking Vision single-engine jets were present at AirVenture, fresh off the production line in Duluth, Minnesota.

Not only is the Vision Business Aviation's first single-engine jet to reach certification (due any day now), the company successfully integrated an airframe recovery parachute in the aircraft – something else the critics said couldn’t be done...

One of the newest business turbine aircraft on the field comes from Daher, showcasing the new TBM 930 and talking about further improvements to its product line. The French OEM landed a prime display area scarcely 150 yards from the flight line along Runway 18/36 – facing a major thoroughfare for the crowds traveling south from the main commercial exhibit area.

The compound curves of the Hartzell composite propellers give the TBM 930 a sense of going fast – even when it’s sitting still.

Embraer has used AirVenture to launch models in the past and this year unveiled an evolved Phenom 100, dubbed the Phenom 100EV (for Evolution). A new Garmin G3000 panel will help the pilot use the 100EV's longer range, faster climb and higher cruise speed. Two launch customers helped provide the upgraded Phenom model with an instant customer base.

Alan Klapmeier smiled through a summer ailment when asked about business at ONE Aviation, noting that the latest incarnation of the Eclipse very light jet is making progress and gathering interest. Also gaining interest and momentum, the option exists for owners to upgrade their early edition Eclipse 500s. The company's Kestrel single-engine turboprop, meanwhile, continues to progress toward first flight of a conformal prototype.

Textron Aviation led the count for aircraft diversity and square footage, and chose AirVenture as the launch point for branding of its new single-engine turboprop, the Cessna Denali, adding depth to an already competitive market for propjet singles. The Denali boasts a cabin slightly larger than the Pilatus PC-12 NG and operating coasts lower than its competitors. Cessna says the Denali will cruise at 285 knots and offer a full-fuel payload of 1,100 pounds, a service ceiling of Flight Level 310 and a range of 1,600nm at high-speed cruise carrying four passengers and a single pilot.

Yet the airframe OEMs weren't the only ones active in BizAv action at Oshkosh...

Garmin, the formidable avionics giant, continues to make progress toward an STC to install its G5000 in Beechjet 400A twin jets using a three-display configuration with two touch-screen controllers. And Blackhawk exhibited a Beech King Air 350 equipped with two new XP140 Pratt & Whitney Canada turboprop powerplants and new props. The gains in speed, climb, reduced take-off distance and fuel efficiency make for a compelling incentive for King Air 350 owners, following in the same vein as Blackhawk's upgrades for the 200 and 90-series King Airs and Cessna's Caravan.

AirVenture truly shows that birds of a feather flock together!