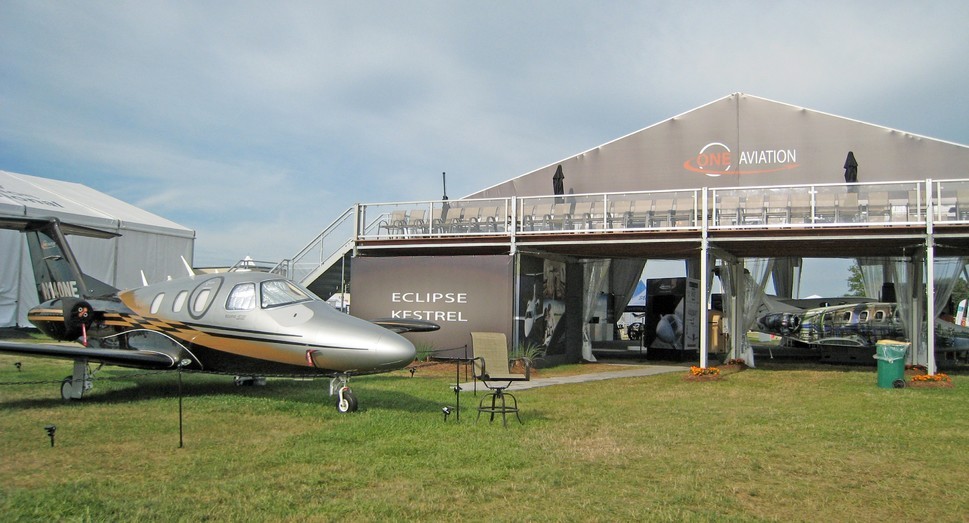 Last week we looked at single-engine jet developments in relation to Oshkosh. Yet, Business Aviation does plenty more than that at Oshkosh, in spite of some perceptions. Dave Higdon reviews…

AirVenture celebrates aviation in all its forms, and Business Aviation interests are far more than mere trifling there. Business aircraft OEMs participate for solid business reasons. For one, the audience is highly receptive to the concept of aircraft as a business tool – to the extent that even relatively new entrants come to Oshkosh to display their wares.

That audience contains a significant share of high-net-worth aviation fans. But you'd never recognize some of the multi-millionaires – they look, act and dress very similar the folks with piston-single budgets.

So Nextant Aerospace - for example - spent time, trouble and capital to show its in-development Nextant G90XT, reminding the huge crowd (incorporating about one-third of the pilots in the US) that its remanufactured propjet twin is nearing certification. King Airs have long been a favorite of the business-owner/pilot and the G90XT, at $2.8 million, represents a value equation well appreciated by that audience.

With single-lever power control for the new GE H75-100 powerplants, a Nextant Regent flight deck (based on Garmin's well-established G1000 integrated avionics package) and an interior roomier and brighter than before, more than a few in the EAA crowd took advantage of the opportunity to try on the G90XT. And knowing this audience led Nextant to undertake some market research, sampling audience opinions and soliciting input on the final cabin design.

The Nextant folks wanted to get the layout right – and sample responses to different configurations.

At the other end of the spectrum, Airbus showed off its new A350XWB – in the same space where Boeing parked a 787 a few years ago. As with the Boeing, large crowds flocked to see inside the extra-wide-body Airbus, parked, ironically, on a show-center space called ‘Boeing Plaza’. This is another airliner airframe destined to serve as a business aircraft – rather than strictly as a common carrier.

Meanwhile, ONE Aviation made its Oshkosh debut announcing new distributors for its Eclipse 550 VLJ and Kestrel 350 single-engine propjet, briefing the aviation media on its progress. And Embraer also invests in marketing at Oshkosh – again, in recognition that not all aviating is business – even for business aviators.

Plenty of business aviators and operators spend time at EAA's signature event – which was one reason a guy named Ed Bolen was all smiles on the Tuesday night, en route to an evening event. “I'm having a great time and NBAA is having an outstanding show,” he told AvBuyer.

Bolen comes here every year for the same reason: to meet members, talk business with regulators, sample the homogeneity of aviation and help promote the value of Business Aviation – an element that exists regardless of the purpose of the airplane.

Ditto for the heads of the Aircraft Electronics Association, General Aviation Manufacturers Association and Helicopter Association International. The FAA and association representatives hunker down in many meetings to discuss aviation issues and the administrator, Micheal Huerta, spent time meeting with association officials, the aviation media, and fielding questions from pilots and owners in a ‘Meet the Boss’ session.

When it comes to passion about aviation, the angle doesn't matter; the airplane helps people accomplish their goals, both personal and business. Did you attend Oshkosh? What stood out for you? Comment below - we’d love to hear about your experiences and thoughts!

Read the Friday Biz Av Blog every week on AvBuyer.com