What’s the Near-Term Impact of UAS on BizAv?

Ken Elliott discusses Unmanned Aircraft Systems (UAS) and how they impact Business and General Aviation. In the second of a three-part series he considers near-term regulation, airspace operation and other related areas. 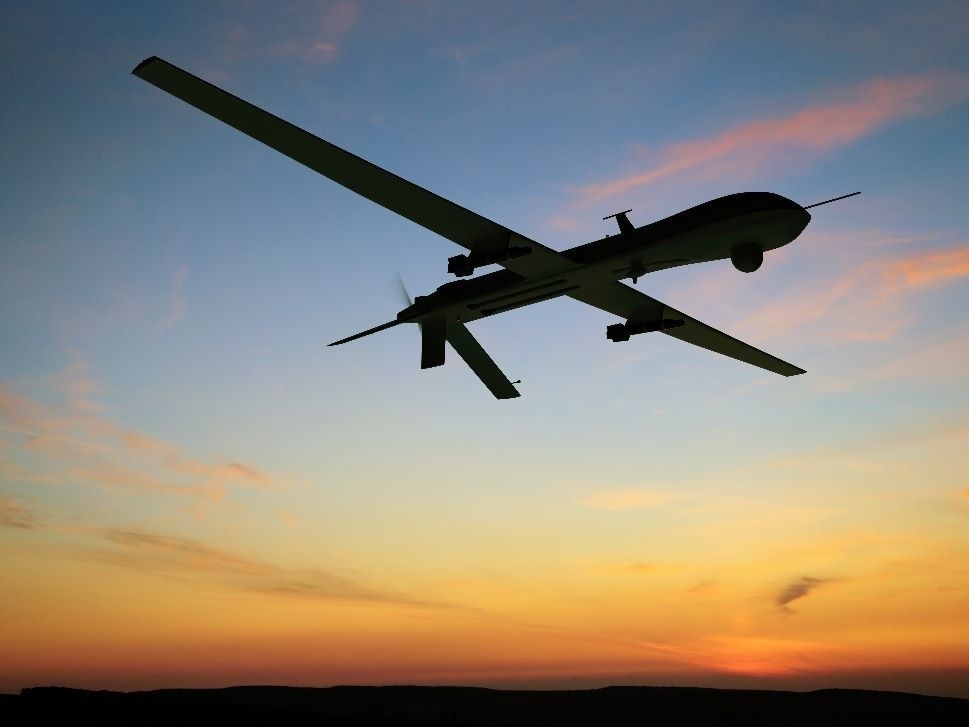 Ken Elliott discusses Unmanned Aircraft Systems (UAS) and how they impact Business and General Aviation. In the second of a three-part series he considers near-term regulation, airspace operation and other related areas.

Following, we will focus on the implementation of unmanned aircraft in the US. Nonetheless, it can be assumed that similar efforts are being explored globally.
ICAO has a dedicated drone guidance toolkit and in January 2018 Europe issued an Opinion Paper to guide the future regulation of drones weighing up to 25kg.

Several nations, including Australia and Canada have mature programs underway and, in some cases, are more liberal in their regulation and guidance, encouraging international unmanned OEMs to conduct airspace trials in places where the environment may appear to be friendlier.

Drones, the generally used term for Unmanned Aircraft Systems (UAS), are set to expand their footprint and operate more frequently in proximity to manned aircraft.

Drone operations are mostly limited to daytime-only flights, below 400ft Above Ground Level (AGL), away from airports and always within the visual line of sight (VLOS) of the operator.

Following is an outline of FAR Part 107 small UAS Rules, per the FAA:

Any drone over 0.55lbs in weight must be registered and this can be completed at the FAA Drone Zone site (https://faadronezone.faa.gov/).
Commercial operators who want to fly missions outside of those ordinarily permitted under the FAR Part 107 Rule will require waivers. Operation aspects considered as deviations to the rule include:

Waivers are being fast tracked by FAA and handled separately to exemptions. Waivers normally apply to operation-related requests and exemptions pertain to an amended interpretation of an existing rule.
Note: rules are Federal and may apply to all classification of aircraft, including unmanned. Waivers are also applied for via the FAA Drone Zone web portal.
Because of where they choose to fly, some operators are required to obtain exemptions from, or approvals to operate within State, Local and Municipal rules and statutes.
These become more of an issue when operating in, or transitioning through, high density urban areas. 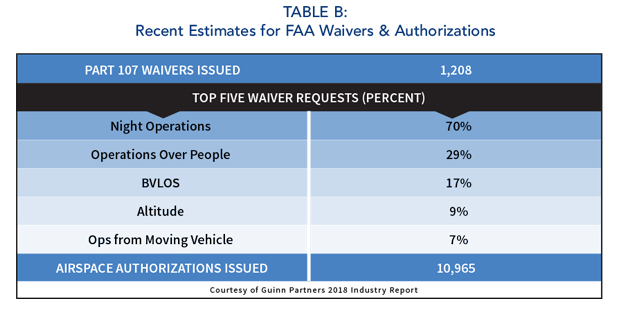 Drone regulations and guidance are mostly pending at this time, as the FAA wrestles with the requirement originating from other government agencies to ensure each drone has ID and can be tracked.
There are many ways to achieve this and the FAA Aviation Rulemaking Committee has recently made its recommendations.

The current White House administration is also reluctant to engage in new regulation, while the FAA has its own budget constraint on how many regulations it can process each year.
The result is a mixture of new programs and trials to gradually allow limited drone operations, pending flight ID, tracking and any other new regulation.

There is, however, a notice of proposed rulemaking (NPRM), due for release in May 2018 addressing operations over people (OOP).

Maintaining a visual line of sight (VLOS) is crucial for all operations unless otherwise approved (and even then only for designated portions of airspace).

The issue of Beyond Visual Line of Sight (BVLOS) is foundational, because it sets a precedent for remotely piloted (and later autonomous) vehicles to operate out of human sight range, relying on other means of maintaining situational awareness, and remain in control.

Drone pilots positioned at remote controls can make immediate judgement calls based on a live ‘out the window’ unfolding of events, set on a ground display.
However, analyzing digital information after latency and signal conversion, and then taking corrective action is not quite the same as a pilot in the cockpit.

Initial BVLOS tests at FAA testing sites are using chase planes or ‘on the ground’ spotters to maintain the necessary real time visual continuity. Technologies and an assortment of solutions are being evaluated to advance beyond the constant application of the human eye on a dynamic scene.

Governments, working with centers of learning and industry, are conducting a variety of flight scenarios to evaluate BVLOS operations.

Selected and carefully monitored flight testing sites are being used to trial scenarios where larger drones are flown near manned air traffic.
These trials test the ability of remote pilots to detect, communicate with ATC and then avoid traffic entering a zone of proximity (Detect and Avoid, or DAA).

The same trials are being used to test technology to include drone compatible versions of TCAS, ground detection and tracking radar, and combinations of sensors such as visual and IR.
Much of this effort is being guided by the RTCA SC228 committee, partnering FAA, industry and others to develop equipment standards.

The highly technical and representative committee receives trial outcomes from NASA and a variety of test sites. These outcomes inform and guide the committee in its standards work.

Unmanned Traffic Management (UTM) is a NASA concept being adopted, in partnership with industry, to solve the integration of operations in uncontrolled airspace.
It can be assumed that operations conducted in controlled airspace (specifically, above 400 or 500ft and away from terminal areas), will be managed along with manned aircraft, under the same rules and instructions.

This UTM effort is separated between portable and persistent, where portable can be set up as temporary, site specific for agriculture and emergencies or disaster relief needs, while persistent targets low altitude, continuous coverage for a specified geographical area.

Over several years NASA and industry are conducting trials to evaluate:

As with the NASA UTM trials, BVLOS is being considered for operations under 400ft, and mostly in uncontrolled airspace. BVLOS will also be considering flights transitioning through Class B airspace. 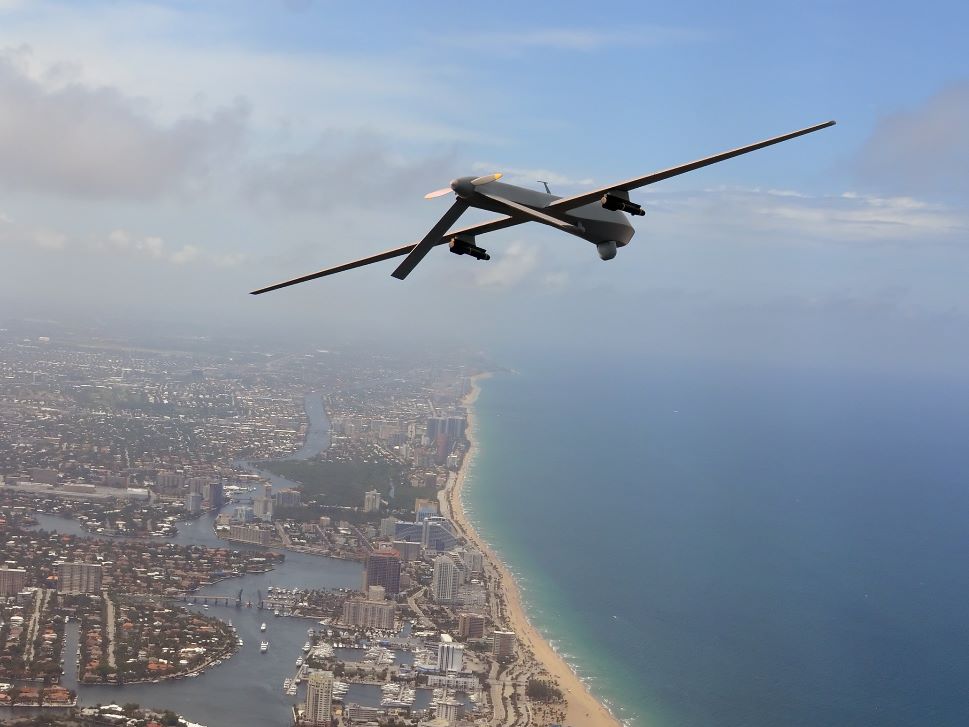 Operating beyond line-of-sight while maintaining a flight ceiling 400ft. When considering BVLOS it is very important to understand that the level of safety and requirements to mitigate risk dramatically change between these two states.
This is played out in the approach of both FAA and industry to what amounts to a problem not yet resolved.
There are four main stakeholders of future airspace, counting the traditional fixed- and rotary-wing manned aircraft operators as the first:
Currently these four stakeholders are discovering their boundaries do not merge well and while FAA wishes to control the US airspace, certain elements of industry would like to see separate areas of jurisdiction.
The FAA, urged on by Congress, ensures safety first then tries to accommodate the pressure and demands of industry as this all plays out.
BVLOS reaches across all three-drone stakeholder operating arenas, while ongoing trials continue to prove the viability of BVLOS, within and without the US.
Automated Airspace Authorization

To quote FAA, “No person may operate a small unmanned aircraft in Class B, Class C or Class D airspace or within the lateral boundaries of the surface area of Class E airspace designated for an airport unless that person has prior authorization from Air Traffic Control”.

While there is no requirement for authorization in Class G airspace, notification is required within five miles of an airport regardless of the airspace class in which the airport resides.
However, ATC does not wish to be bombarded with requests, or track small UAS traffic on its monitors. A recent FAA program tackles this concern.
To accommodate and control unmanned activity close to traffic-controlled airports, the FAA’s Low Altitude Authorization & Notification Capability (LAANC) program provides for predictable and monitored operations within small well-defined altitude-limiting blocks of airspace, requested by the operator and approved at relatively short notice.
This well mapped airspace also allows for manned emergency helicopter and other public service or law enforcement operations, in and out of the same assigned blocks.

LAANC relies on the FAAs availability of authenticated map data to inform its authorization. Multiple third-party providers then enable services for drone operators using these maps.
Under the LAANC program the FAA Air Traffic Organization (ATO) recently fast-tracked the approval of operations near several airports that provide normal air traffic services. These approvals were initiated from applications received via the FAA web portal, DroneZone.
The LAANC service began with 10 airports and will expand to 49 by the end of September 2018. The maps and the program will continue to grow as lessons learned mature.

FAA LAANC, operations are not to be confused with the NASA Unmanned Traffic Management (UTM) research plan. Here is where rulemaking will be developed to allow BVLOS operations and operations over people that may also function above the low altitudes permitted under LAANC.

The FAA uses six service-providers to accommodate LAANC requirements, including Airmap; Amazon; Boeing; Google; Harris; and Skyward. For Part 107 operators, the FAA can grant near-real-time authorizations for most low altitude operations near selected airports. This will reduce ATC distraction and increase public access.

Tables C and D demonstrate the level of data transfer and authorizations that take place between drone operator, air navigation service provider and FAA. This amount of collaboration enables the FAA to provide the low-level operating waivers. 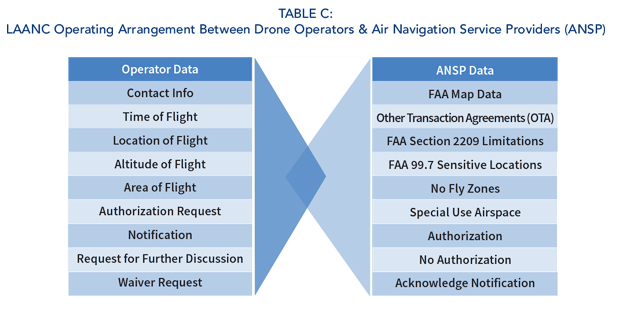 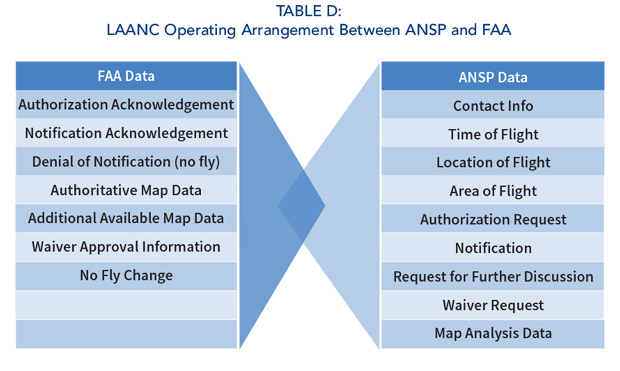 Drone operators can apply for two types of authorization, including:

Under the FAA LAANC program there are facility maps for around 300 airports and growing. Each map outlines a gridded area and each grid-square is assigned an altitude limit.
FAA IPP Program

Originating from the White House, and channeled via the DOT to FAA is the new UAS Integration Pilot Program (IPP). This is all about creating jobs and finding new and novel ways to allow low-altitude operations, primarily in populated areas.

By selecting a limited number of state, regional and tribal authorities who will be teamed with drone and service providers, it is planned that a collaborative partnership at a regional level can trial new concepts and inform both future regulation and guidance.

Expect this program to be active in the latter part of 2018.

Seven university- and airport-led test sites have been deployed to conduct a variety of UAS trials and tests. Interested parties collaborate with a center, its students and specialists to conduct concept validations, monitored operations, followed by analysis and published findings.
Public agencies, law enforcement and industry will provide concepts of operation (CONOPS) to a center that then develops the program. Each center specializes in different areas, while some team up providing shared services. 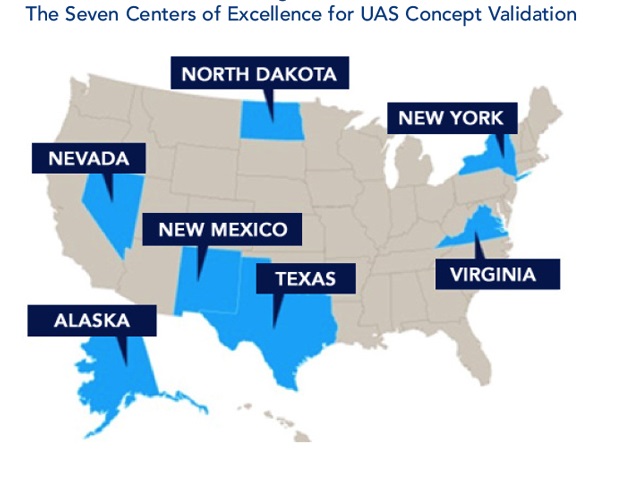 Government agencies across the world are enabling drone operations as quickly as possible, while maintaining safety and with a ‘do no harm’ approach to existing airspace operations.
Most drone operations use small (under 55lbs) platforms and it is from that sector where we see a tremendous amount of political and economic driven pressure being applied to create user trade spaces below 400ft AGL.
Using waivers and exemptions, the FAA LAANC programs and other international approvals, drones are beginning to operate where manned aircraft fly.
The future is murky, especially considering the wide gulf between Part 107 and manned Part 91, 135 and 121 operations, with all that implies.
Business and General Aviation operators are currently well protected by the airspace separation and processes in place to avoid incidents and ensure safety. The FAA is serious about maintaining the integrity of its airspace.
It is a doing all it can to accommodate both the White House and public-industry pressure, while gradually accommodating the demands of the drone community, but at a pace not all may enjoy. 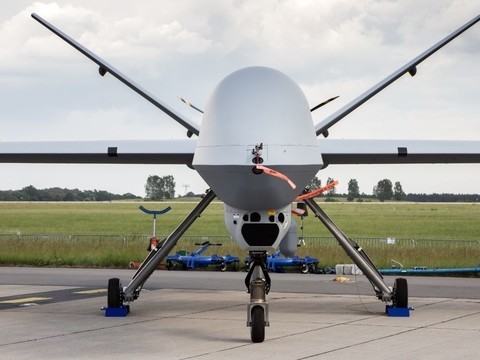 What’s the Current Impact of UAS on BizAv?