The Concorde... Harrier... the ‘Jumbo’... and the mighty Spitfire!... if you’re playing ‘Top Trumps’ these are the cards you want! These are the aircraft that helped shape the evolution of aeronautics in so many ways and the aircraft that inspire us all still today. Following, we trace the history of one particular aircraft; Spitfire MH415...

Whether it's a Concorde, Harrier, Jumbo, or Spitfire, they appeal equally if you’re old or if you’re young, whether you’re an enthusiast or a pilot. These are almost timeless aircraft. They have the ‘X-Factor’ and to be near one is nothing short of a privilege.

So, imagine my excitement when not only was I walking around one beautiful Mk. IX Spitfire, but it was one of the most original and complete examples flying in the world today. But before we get to formal intros, let’s take a moment to see where it’s roots first took grip...

King of the Castle

Dating all the way back to an Air Ministry paper released in 1931, the Spitfire seed was first sown. From there it evolved at an exponential rate as WWII approached with the first production Spitfires rolling off the line in mid-1938.

The Spitfire’s calling was to be a short-range, high-speed interceptor. The man behind the aircraft was of course R. J. Mitchell, chief designer at Supermarine Aviation Works. He sadly died in 1937, before actual production of his design got underway, so his right-hand man Joe Smith took

All told, some 24 Marks of Spitfire came through various production assembly lines, but of all these, the Mk. IX is perhaps the most sought-after. Interestingly, the Mark numbers didn’t always progress in chronological order.

Due to mounting pressure in the skies from the dominating German-built Focke-Wulf Fw 190, the Mk. IX was quickly brought forward and existed between the Mk. VII and VIII aircraft.

The Mk. IX is powered by a huge, 27-litre V-12 Rolls-Royce Merlin engine, featuring a two-stage supercharger and developing a whopping 1,705 hp at sea level! Not to mention it has a service ceiling of just over 42,000 ft (higher than a Boeing 737!). And, of course, it features (as many other Marks did) the stunning elliptical wing. By the way... where did that come from?

A gentleman by the name of Beverly Shenstone is largely credited with the elliptical wing design. Essentially the requirement was to reduce drag with the lowest possible ‘thickness to chord’ wing design, yet it still needed to accommodate the retractable landing gear and associated systems and be armed with wing-mounted guns.

Between Shenstone and Mitchell they concluded that the ellipse shape provided the aerodynamic requirements they needed while also providing a wing of the thinnest possible design, and at the same time still leaving space for sufficient strength in the structure and “the things we wanted to cram in.” That is a genuine quote from Shenstone, and he concluded with “...and it looked nice [too].” So it was a real case of Form, Fit, Function — and boy did they get it right! 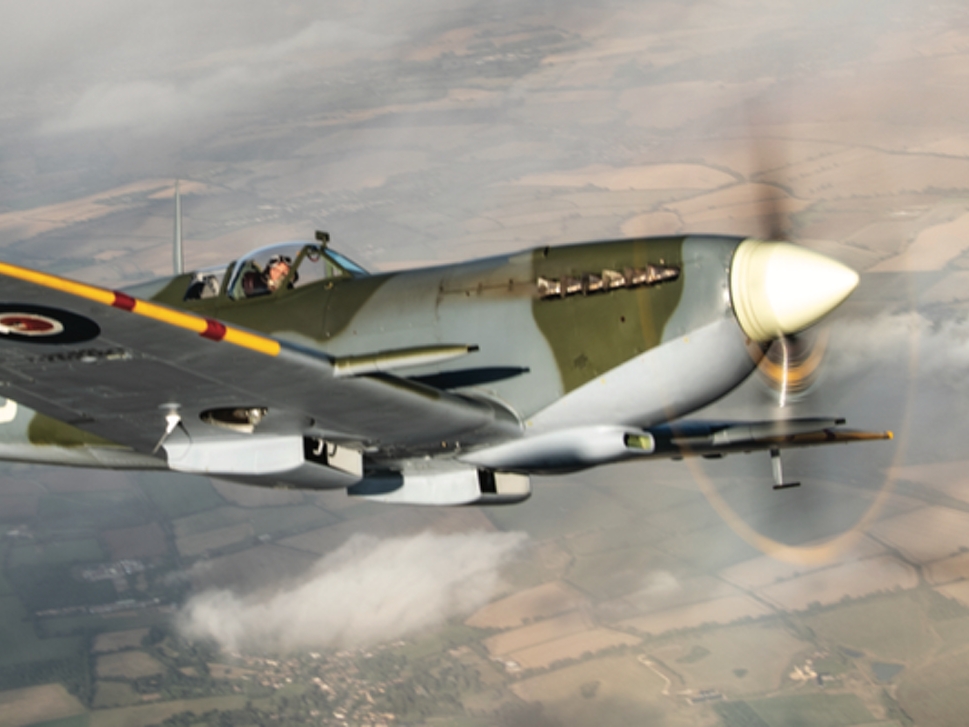 This aircraft, ‘MH415’ (now registered G-AVDJ), was built, like many before it, by the Castle Bromwich Aeroplane Factory as a Mk. IX aircraft in 1943 with construction number CBAF 5542. But the truly amazing thing about this aircraft is that it remained in a fully assembled condition from the date of manufacturer right through to its restoration, which was started in 2015 (other than for shipping and maintaining it). That is very, very unusual for a 78-year old wartime aircraft!

And it’s got combat history too. Most notably, on the 24th September 1943, MH415 claimed a Fw 190 “victory” north-west of Amiens in France whilst being flown by F/O Desmond F. Ruchwaldy during ‘Ramrod 242’, a mission to escort 12 Mitchell bombers detailed to attack the Amiens Marshalling Yards.

This mission, along with many others, is documented in the aircraft records, which also include the original RAF Operations Record Books.

MH415 flew in combat with both 129 and 222 Squadrons covering some 55 missions. Following WWII, in 1946, the aircraft was sold to the Dutch Air Force and was dispatched in 1947 directly to Java as a ground-attack aircraft. In 1950 the aircraft was shipped to Holland and placed in storage until 1952 when it was sold to the Belgium Air Force. A systems overhaul was carried out at Schiphol Airport before it was ferry flown over to Koksijde in Belgium. It remained with the Belgium Air Force until 1956.

Moving from Military to Civilian life saw a whole series of new adventures unfold for the aircraft, including towing a drone for target practice in Belgium and even as a film star in both the 1962 film ‘The Longest Day’ (staring John Wayne and Richard Burton) and of course, perhaps the most famous of all wartime movies, the 1969 blockbuster ‘The Battle of Britain’! 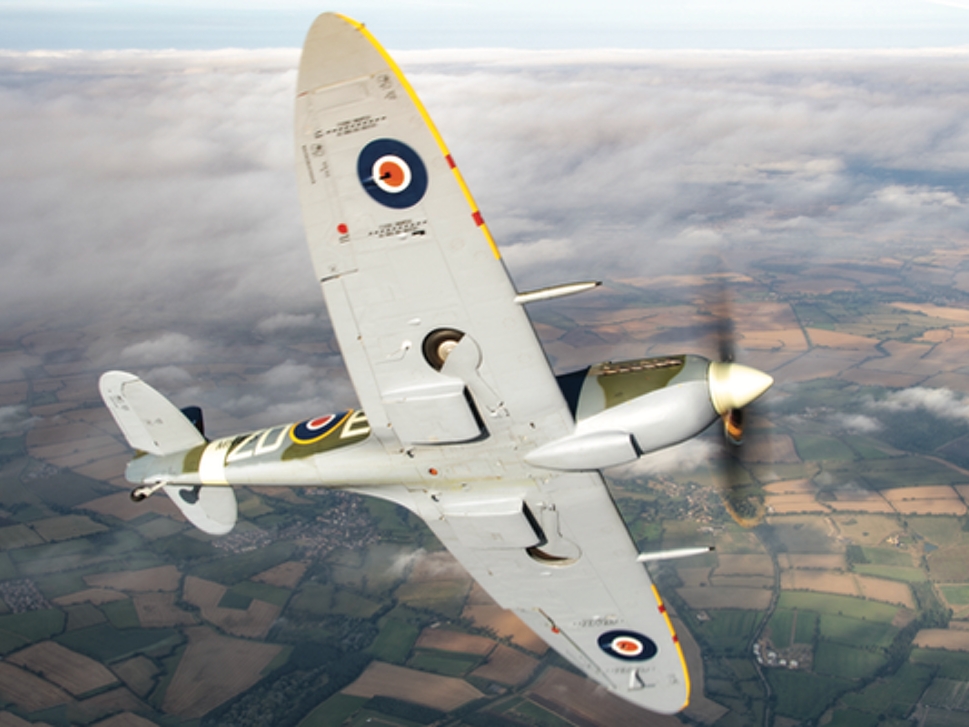 A Star is Born

During filming for the Battle of Britain in 1968, MH415 was used extensively for aerial sequences, not just in the UK but also over in Spain where a very busy Aerial Unit was shooting (not literally this time!) a huge scene involving German fighters and bombers. The footage was then put together with other scenes filmed in the UK and France involving Spitfires and Hurricanes.

To give the sequence in Spain continuity they ferried down one sole Spitfire, which was none other than MH415! So she found herself in a sky full of fighters and bombers once more, although this time in a more friendly setting.

The Aerial Unit used 28 Buchons to play the part of the Messerschmitt 109s (including our Buchon ‘White 9’, see GA Buyer, August edition) and a number of CASA 2.111s which played the part of the Heinkel HE 111s. The landscape around southern Spain was considered similar enough to resemble France and Britain, so the footage all merged together very well.

After the filming in Spain was complete, MH415 was flown back to the UK but was promptly added to the call sheet again when production needed her for more shots, this time in the South of France where the aircraft spent three weeks filming.

After that, MH415 flew back to the UK to carry out a few more sorties for some ‘bail out’ shots. By the end of all that filming, MH415 had accumulated some 125 hours of flying for the movie. 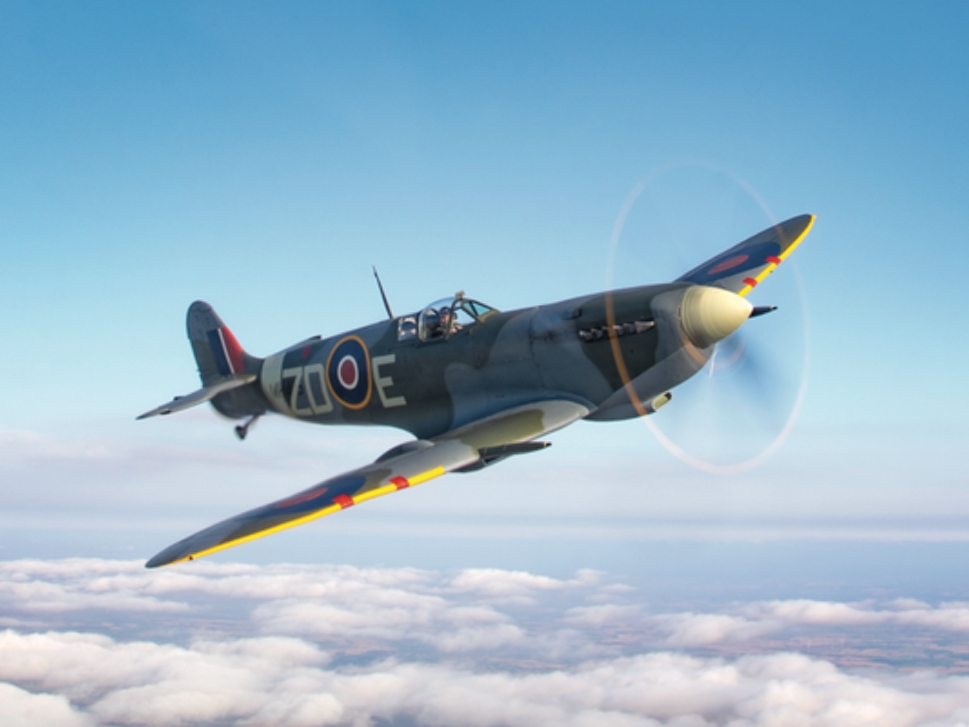 To the States and Back!

The aircraft didn’t have much of a breather before it was purchased by private collector Wilson ‘Connie’ Edwards (along with a number of the Buchons). The aircraft was shipped to Connie’s base in Texas, USA, and was registered as N415MH (nice choice Connie!) and he added the 222 Sqn. markings to the aircraft livery.

Connie flew the aircraft occasionally in the US through to 1973 when it was placed in long-term storage (alongside a number of the Buchons).

The aircraft remained in storage (still fully assembled) right through to 2015 when it was sold to a private buyer in Australia. The aircraft was fully disassembled (for the first time since production, other than just partially for the purposes of shipping or maintenance) and a thorough restoration was started.

This was eventually finished by world-renowned Spitfire specialist ‘Air Leasing’ back here in the UK.

The aircraft was test flown in April this year and the pictures displayed herewith (which were done for this article) were taken just a few weeks ago in August (flown by Richard Grace).

As stated in the introduction, this is one of the most original Spitfires in the world. As it stands today she is over 95% original per the day she rolled off the production line!

The only other Spitfire that can claim the same is, would you believe, just up the road! So if MH415 sounds at all familiar, it might be that you have read about, or even seen fly, her sister ship (also a Mk. IX) MH434. This family member (which isn’t for sale, whereas MH415 is) is based out of Duxford and owned, maintained, and operated by the excellent Old Flying Machine Company.

Not only were these two aircraft built in the same production batch at Castle Bromwich, but they both served in combat and scored victories in 222 Sqn. (and both recorded victories over an FW190!). MH434 is probably the best-known Mk. IX in the world, and for good reason; it is likewise amazingly original, it’s an exceptional example and is beautifully maintained.

To now have both these aircraft flying, and both flying in the UK, is actually an outstanding bit of luck and something very special for the Spitfire community and indeed the warbird world as a whole. We are very much looking forward to opportunities in seeing these two aircraft flying together!

I am sure you will agree that the story of MH415 is something very special indeed. Not only is it a type that’s regarded by many as one of the most iconic shapes to ever take to the sky, but it’s also an ‘exceptional’ example of that type. And I hope you enjoyed seeing the pics from the recent formation shoot, we certainly enjoyed taking them! Look out for more soon!