How will these two popular helicopter models compare side-by-side? 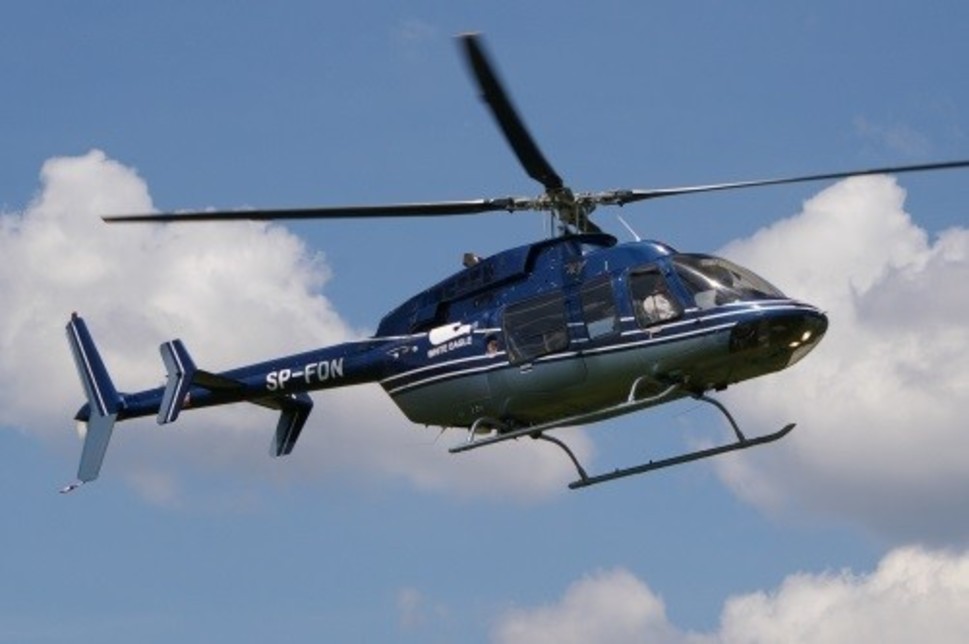 In this month’s Aircraft Comparative Analysis, Mike Chase provides information on a pair of popular single turbine helicopters for sale, with the purpose of valuing the Bell 407. 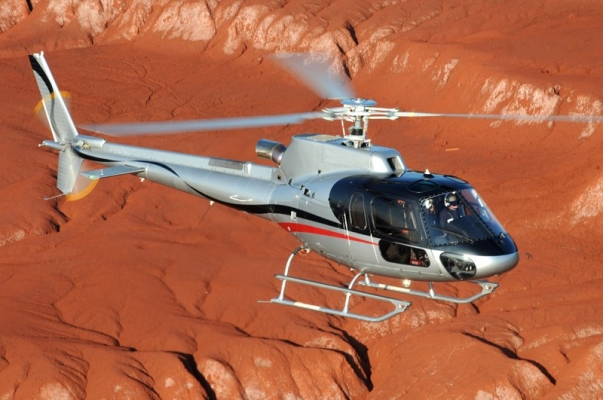 Over the following paragraphs, we’ll analyse the performance of the Bell 407 and Airbus H125 (formerly the Eurocopter AS350B-3e) to see how they compare within the market. We’ll consider productivity parameters (Payload, Range, Speed and Cabin Size), and give consideration to the current market values. 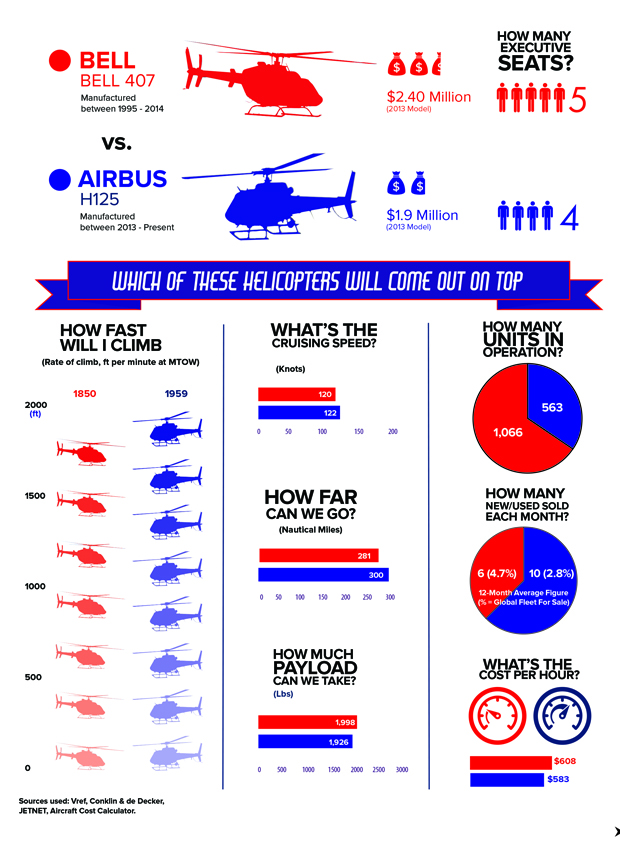 The Bell 407 is based on the 206L-4 LongRanger fuselage, but offers a wider cabin and larger cabin windows. Introduced in 1995, the Bell 407 series is still in-production today in the form of the 407GXP. It features an all-composite, four-blade rotor, a carbon fiber tail boom, and is designed for superior hover performance in hot-and-high conditions.

Subsequently, the Bell 407GXP was introduced in 2015, and is a variant of the Bell 407GX. The 407GXP offers an additional 50 lbs. of payload capability and an engine with improved performance and fuel efficiency. There are currently 240 Bell 407GXP helicopters in-operation worldwide.

All told, there are 1,060 wholly-owned Bell 407 rotorcraft operating globally and an additional six that are in shared ownership (giving a total in-operation fleet of 1,066). Furthermore, 9.8% (105) of the Bell 407 fleet is leased.

The fleet percentage currently ‘For Sale’ is 4.7%, with 30% of those aircraft under an exclusive broker agreement. The average days on the market before a Bell 407 sells is currently 531 days, according to JETNET. By continent, North America holds the largest fleet percentage (68%), followed by Asia (9%) and South America (7%) to give a combined total of 84%.

The data contained in Table A are published in the B&CA, May 2016 issue but are also sourced from Conklin & de Decker. As we have mentioned previously, a potential operator should focus on payload capability as a key factor. The Bell 407 ‘Available Payload with Maximum Fuel’ (1,142 lbs) is more than that offered by the Airbus H125 (987 lbs).

Table A also shows the fuel usage of each aircraft (as sourced from Aircraft Cost Calculator). There is almost no difference between the fuel usage of the Bell 407 (43.2 Gallons Per Hour) and the Airbus H125 at 42.3 GPH. 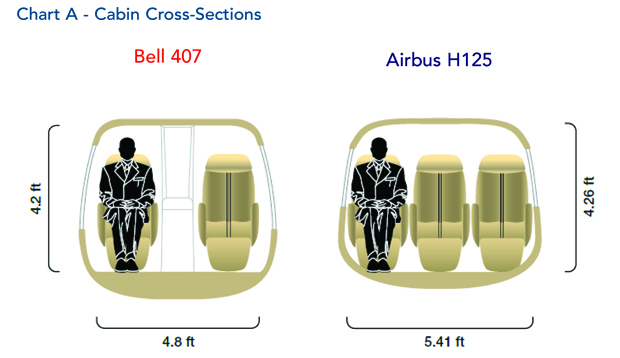 Note: Conklin & de Decker measures the cabin dimensions differently for each of these aircraft. The dimension given does not include the cockpit for the Bell 407. Additionally, the H125 cabin design is curved, whereas it’s squared-off in the Bell 407 (Chart B).

The Bell 407’s maximum VFR range of 281nm is slightly less than that of the Airbus H125 (300nm), according Conklin & de Decker. The Bell 407 is powered by a single Rolls-Royce turbine 250-C47B engine offering 813 shp, while the Airbus H125 is powered by a single Turbomeca turbine Arriel engine with 847 shp. (The transmission rating is a limiting factor in the total rated and usable engine power output.)

Chart C shows the Top 10 of the 60 countries worldwide that operate the Bell 407, with the United States having 50% of all operators worldwide. Additionally, 120 operators own 580 (or 54%) of the Bell 407 fleet. The largest single fleet owner is PHI, Inc., Lafayette, LA, United States with 63 Bell 407 helicopters.

Using data published in the May 2016 B&CA Planning and Purchasing Handbook and the August 2016 B&CA Operations Planning Guide we will compare our helicopters. The nationwide average Jet-A fuel cost used from the August 2016 edition of B/CA was $4.90 per gallon at press time, so for the sake of comparison we’ll chart the numbers as published.

The ‘Total Variable Cost’ illustrated in Chart D is defined as the Cost of Fuel Expense, Maintenance Labor Expense, Scheduled Parts Expense and Miscellaneous Trip Expense. The Total Variable Cost for the Bell 407 computes at $608 per hour, which is $25 higher than the Airbus H125 ($583 per hour).

Table B contains the new prices from Vref Pricing Guide for each helicopter. The average speed, cabin volume and maximum payload values are from Conklin & de Decker, while the number of aircraft in-operation and percentage ‘For Sale’ are as reported by JETNET.

Helicopters that are owned and operated by businesses are often depreciable for income tax purposes under the Modified Accelerated Cost Recovery System (MACRS). Under MACRS, taxpayers are allowed to accelerate the depreciation of assets by taking a greater percentage of the deductions during the first few years of the applicable recovery period (see Table C).

In certain cases, helicopters may not qualify under the MACRS system and must be depreciated under the less favorable Alternative Depreciation System (ADS) where depreciation is based on a straight-line method, meaning that equal deductions are taken during each year of the applicable recovery period. In most cases, recovery periods under ADS are longer than recovery periods available under MACRS.

Helicopters used for qualified business purposes, such as Part 91 industrial aid flights, are generally depreciated under MACRS over a period of five years or by using ADS with a six-year recovery period. There are certain uses of the helicopter, such as non-business flights, that may have an impact on the allowable depreciation deduction available in a given year.

Table D depicts an example of using the MACRS schedule for a 2014-model Bell 407 helicopter in private (Part 91) and charter (Part 135) operations over five- and seven-year periods, assuming a new retail price of $2.4m, per Vref Pricing guide. 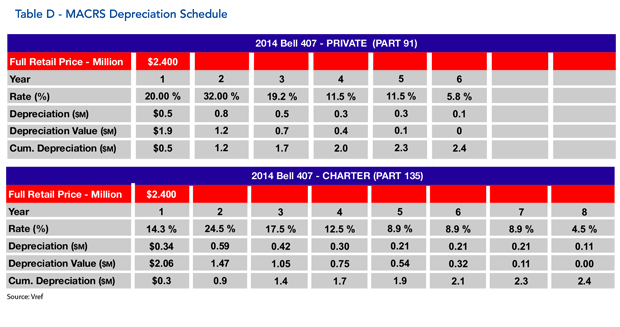 While each serial number is unique, the Airframe (AFTT) hours and age/condition will cause great variations in price. Of course, the final negotiated price remains to be decided between the seller and buyer before the sale of an aircraft is completed.

The points in Chart E are centered on the same helicopters. Pricing used in the vertical axis is as published in the Vref Pricing Guide. The productivity index requires further discussion in that the factors used can be somewhat arbitrary. Productivity can be defined (and it is here) as the multiple of three factors:

1. Range with full payload and available fuel;
2. The normal cruise speed flown to achieve that range;
3. The cabin volume available for passengers and amenities.

The Bell 407 shows a higher retail price but greater productivity compared to the Airbus H125. The Airbus H125 has a lower variable operating cost and slightly longer range advantage, but the Bell 407 offers a larger cabin volume and a greater ‘Payload with Full Fuel’ capability.

The used Bell 407 shows good monthly full retail sale transactions averaging six units per month, and is still a very popular model on the used helicopter sales market today. Operators should weigh their mission requirements precisely when picking which option is the best for them. 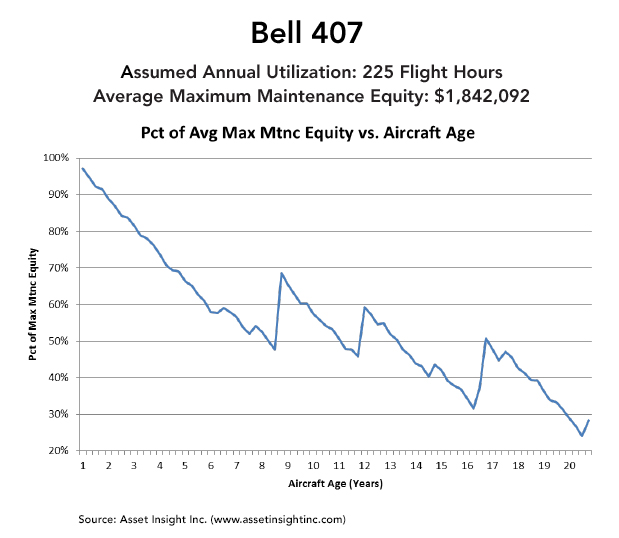 Within the preceding paragraphs, we have touched upon several of the attributes that helicopter operators value. However, there are other qualities that might factor in a buying decision too.

The Bell 407 continues to be popular today. Those operators in the market should find the preceding comparison useful. Our expectations are that the Bell 407 for sale will continue to do well on the used helicopter sales market for the foreseeable future. 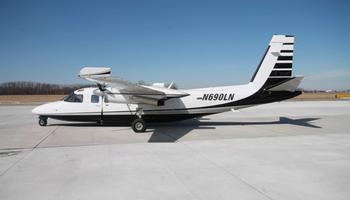 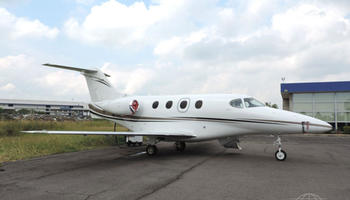 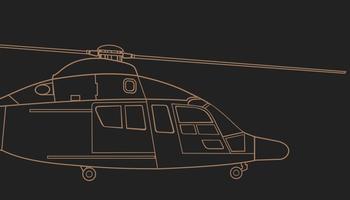 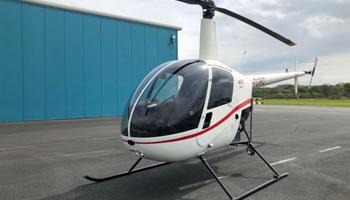 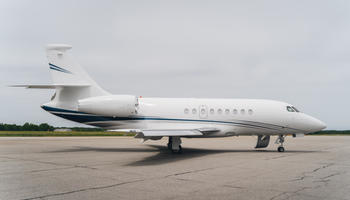 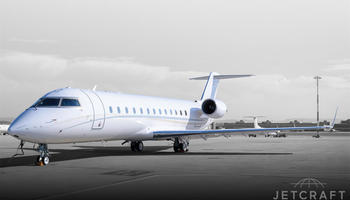