Planes Sense on Engines - The Best and Worst of Upgrades, Updates and Overhauls

Success can be measured in many ways. For some, the measure of success is focused on dollars and cents, if not sense. It’s no secret that savings are often how success is measured in aviation: money and time savings. Airplanes that are well-maintained and well cared-for last for decades longer than their creators and the airworthiness authorities ever expected. 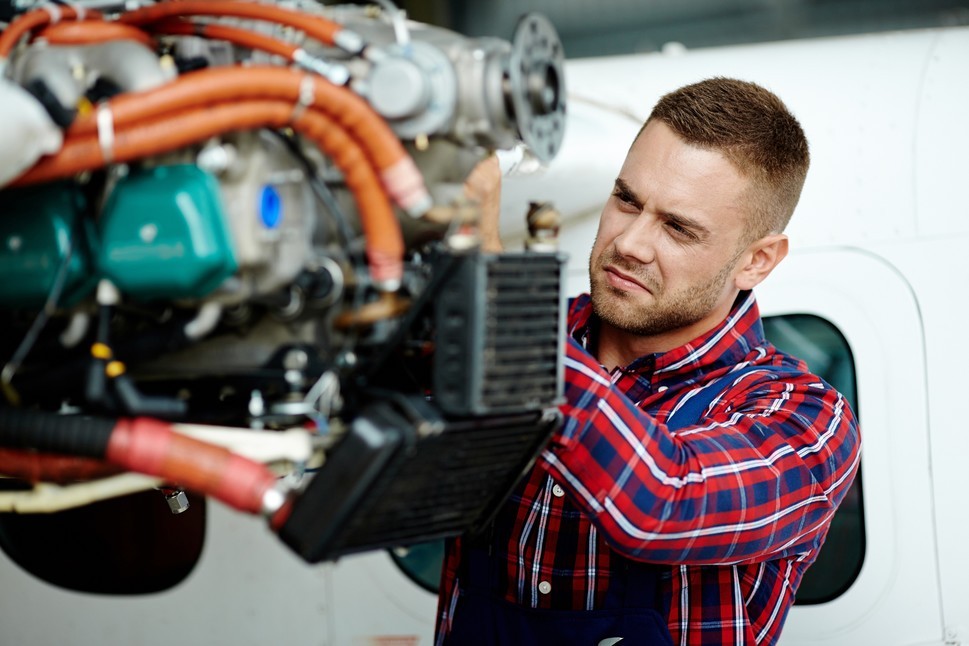 Success can be measured in many ways. For some, the measure of success is focused on dollars and cents, if not sense. It’s no secret that savings are often how success is measured in aviation: money and time savings. Airplanes that are well-maintained and well cared-for last for decades longer than their creators and the airworthiness authorities ever expected.

In fact a sound, old airframe can hold promise of a new life that is as useful and functional as a new airframe thanks to some of the refit programs available today. Modern cockpit equipment can be fitted into the flight decks, updated interiors added to the cabins, and engines can be overhauled or replaced. The good news for many an operator who is happy with their airplane: you no more have to settle for original powerplants.

Just as modern avionics can bring capabilities and efficiencies to the aircraft that were unavailable with the old equipment, for many an older airplane newer engines - sometimes wholly different than the originals - offer eligible airframes a new lease of life – and save the owner/operator a significant sum of money in the process, thanks to the higher efficiency and greater reliability of the replacement mills.

Yet an engine-upgrade may not always be the smartest approach for an airplane or situation: First, the original engine model may remain the only option for many older aircraft. In other cases, various options might exist. If multiple options do exist, the differences between them are worth fully understanding: that understanding could save you money.

New FAA legislation finally passed and signed into law in February brings new incentives for owners of some older aircraft to act on getting an upgrade to their older aircraft. But with little question, to continue the successful use of an older turbine-powered business aircraft engaging one of several successful powerplant-upgrade programs will serve the purpose of making your flight operations more successful, as well.

A VALUE SOLUTION SINCE 1945
Many of the aircraft heralded as pioneers in Corporate Aviation benefited from some of the first conversion work performed on business aircraft: namely the make-over of airplanes that started life serving other purposes (usually military, sometimes commercial). Entrepreneurs and forward-looking business owners adopted these hardy aircraft and adapted them to serve as corporate aircraft. Even today some operators continue to fly DC-3 and C-47s in business and commercial roles.

Adapting these and other aircraft to a new role mostly focused on refitting their interiors into business-friendly form from their spartan military origins along with some updates to cockpit systems. The engines you had were the engines you got, however.

The decade following the war’s end saw manufacturers begin to answer market demand with purpose-built business aircraft – jets, then turboprops. Not long after the emergence of Lockheed’s four-engine Pratt & Whitney-powered JetStar an engine upstart developed and offered an alternative to the JT12 turbojet – a firm then known as Garrett Turbine Engine Company. Garrett STC’d and sold a few dozen conversion packages by the time Lockheed co-opted the program and cut out the middle man by adapting the same Garrett TFE731-3 on new production.

Garrett shortly afterward developed another TFE731-3 upgrade package, this one for Hawker Siddeley’s HS-125. As Lockheed did before it, British Aerospace ultimately adapted the TFE731-3 for new production Hawker 700s.

That didn’t happen when Garrett turned its focus to Dassault’s iconic Falcon 20, dominating the market by converting most of the Falcon 20s flying to the new TFE731-5AR. These three conversions all set the mold by which future powerplant retrofits were gauged: they delivered improvements over the engines replaced with higher fuel efficiency, lower maintenance demands, longer life and higher available thrust. The thrust and fuel efficiency gains translated operationally into higher cruise speeds, improved climb rates, longer range and shortened en-route times.

Today many other airframes benefit from these same improvements with new-generation engines available for decades-old airframes.

SUCCESSFUL UPGRADE = ECONOMIC WINNER
Despite the above combination of improvements in three distinct cost areas, today the most-frequent rationalization is a fourth aspect that comes from an engine retrofit: overhaul costs versus acquisition costs.

For many of today’s upgrades, the selling point focuses on engine overhaul periods. Whether it’s the 1,000 hours of decades ago or the 3,500 hours of many modern engines, that overhaul cycle may be planned on and saved for, but it’s generally still a cause for deep consideration of the costs.

After considering the matter, many an operator concludes in favor of an upgrade simply because the old engine design’s needs make it more expensive to overhaul than a new version in the same power range. Thus, when overhaul costs approach, or exceed the cost of a newer engine, the conversion and installation, all the other factors (climb, range and speed) become the icing on the cake. For less money, you could have more of everything you need from an aircraft powerplant.

For some operators, however, the question of whether to upgrade now has a different set of considerations – as well as a sudden sense of urgency.

CONGRESS SETS A SOUND DEADLINE
Although few are still flying, enough still exist to make them a focus of congressional regulatory tinkering in the new FAA funding bill passed and signed last month. We refer, of course, to system access for aircraft with powerplants that meet only Stage 1 or Stage 2 noise guidelines.

Last month in the FAA reauthorization bill Congress mandated that all old Stage 1 and Stage 2 jets must meet Stage 3 noise-emission standards by the end of 2015. This cut-off has been a long time coming, with delays, postponements, debates and more delays long after other parts of the world took the same step. In one rare compromise of this present Congress, the Senate and House conference committee negotiators reached an accord reconciling their different phase-out goals which was, for the House, December 31, 2016 and 2014 for the Senate.

Now, like the early 1980s when a Stage 1 ban on commercial aircraft went into effect, the FAA is indicating that it will resist issuing waivers. “The alternatives have been around for most of these for a long time,” said one agency insider familiar with the past experience.

Thus a small number of operators flying some of Business Aviation’s oldest hardware will need to make a choice: upgrade to a Stage 3 powerplant system (if such an upgrade exists), or upgrade to a compliant aircraft.

OVERHAUL ECONOMICS 101 - $K
Lest anyone get an incorrect idea, the prospect of upgrading powerplants isn’t limited to jets. Operators of some turboprop models enjoy options too – with all the same gains and benefits of the jet-engine update. The most-frequent selling point to most upgrade programs centers on the overhaul costs of that old powerplant – versus the cost of a new replacement engine.

For example, consider the overhaul costs of some PT6A turboprop engines. For some of the oldest engine models the costs can push $400,000 – when for approximately $475,000 options exist that can replace many of those older engines on older-model airframes. Although that’s not cheaper at face value, what makes it less expensive long-term are ancillary aspects of the upgrade:

• Longer inspection and overhaul cycles – both of which reduce hourly costs over the life of the engine;
• Lower
specific fuel consumption;
• Higher power and, often a lighter installation, resulting in climb and cruise gains, as well as range gains from the speed increase realized;
• A full, new-engine warranty (something that overhauled engines typically cannot match).

Blackhawk and GE both offer significant packages for certain turboprops. For example, King Airs can be given upgrades by Blackhawk with PT6A powerplants of much newer design than the original equipment models. And GE offers King Air packages built around the Walter engine models it acquired a couple of years ago – and they are cost-competitive if not yet commonplace.

Further, Blackhawk offers upgrades for other airframes built around the same philosophies applied to the King Air packages – among them a performance upgrade for Cessna’s popular Caravan and Conquest propjets, while owners of some Piper propjets also enjoy options offered by Blackhawk. Returning to GE, the company tapped Power 90 back in 2009 to serve as the preferred engine conversion for the King Air 90, naming Smyrna Air Center in Tennessee as the designated Walter engine installer for the King Air 90 using the M601E-11A engine.

THE JET SETS
Remember the Falcon 20 upgrade mentioned earlier? Premier Aircraft LLC working with today’s version of Garrett - Honeywell - offers the Falcon 50 Dash 4 upgrade for the French planemaker’s first triple-engine airframe, the Falcon 50. When the upgrade decision is made in light of the cost of overhauling or replacing a powerplant with the original model, the costs can be competitive – possibly even lower over the long run.

Several powerplant upgrades exist for older Learjets, Beech Premier IA and Beechjet 400A airframes that offer attractive alternatives to sticking with the old engine, and Cessna’s early model Citations. In this last case it’s Sierra Industries that pioneered the use of modern Williams International FJ44 engines in place of the original on Citations, and Sierra offers multiple successful packages for Cessna Aircraft’s earliest light jets.

Think about the elements of a successful upgrade and see if you can pick out the down side:

• You can upgrade for less than an overhaul, so that’s not it.
• The upgraded engine uses less fuel to produce more power…so that’s not it either.
• Cash registers will ring in lower fuel bills the first time you start those new fanjets up – so, the payoff never ends.
• The engines make more power at high altitude, which makes you faster… that’s another plus.
• You get to those higher altitudes faster, too, with shorter trips resulting – another positive.

There is one downside pending for failure to upgrade a Stage 1 or Stage 2 jet: namely the airspace-system lock-out starting on January 1, 2016.

MATTERS OF FINANCE…
Tax treatment for an engine upgrade can often be depreciated on a shorter schedule than normal; with the help of a credible appraisal, a financing institution can often be shown how the amount sought is collateralized by the improvement itself.

You could set up the payback on an accelerated schedule, plan staged upgrades, and within five years be flying an airplane that, five years prior, had all the appeal of a plane its age but now has the appeal, utility and reliability of something far newer…for far less money.

Working with your accountant, an appraiser and a qualified avionics shop can help you plan around any major maintenance work due - particularly important when applied to something as major as an engine upgrade. Should Congress act as expected and extend through 2012 the 100-percent “bonus depreciation” that’s been in effect for two years now, an upgrade could be depreciated entirely in the year undertaken – or spread out for broader impact if your accountant prefers.

Using the 100-percent bonus depreciation is not a ‘Fits-All-Situations’ act, accountants caution, and should be weighed on a tax-bill-by-tax-bill basis. But there can be no question that once that engine upgrade is complete the operator flies an aircraft with lower maintenance costs, better performance, and a higher market value – all at less than the cost of overhauling the old aircraft. Doesn’t that ring with the sound of success?