Ever wondered what's involved in aerial firefighting? Then you'll want to check out Patrick Ryan's overview...

In recent years the world has seen some of the most significant and difficult wildfires, which have caused tremendous damage. When it comes to the future, it doesn't look any better. However, the Aerial Work (AW) aviation Aerial Firefighting (AF) sector is a significant resource in ensuring these fires don't continue to destroy property and habitat.

The critical benefits Aerial Firefighting provides is a significant success tempo of controlling fires and providing added force and safety for the firefighters on the ground.

Oxygen - What is Aerial Firefighting?

Opposite to popular belief, aerial firefighters do not put out the fire directly. The aerial team is a support element to the ground firefighters. Aerial Firefighting aircraft provides a massive array of capabilities from information sharing, command & control, tactical airlift to airdropping critical fire suppression retardants at the fire zone's periphery. Similarly, smaller airplanes or helicopters focus on dumping water directly to fires to stabilize the situation to allow ground crews to establish firebreaks.

Fuel - What does Aerial Firefighting Do?

Aerial Firefighting is not a one-off aircraft dropping a bucket of water on a spot fire or laying a red dye cloud on a rowing Fireline. It's an international Air Force consisting of specialised missions and aircraft with a focused effort to support wildfire' containment and suppression. Aerial Firefighting undertakes a wide range of valuable specialised tasks or missions, including:

As with any battle, the intelligence of a situation is critical, and wildfires are no different. The purpose of aerial detection, reconnaissance, and mapping flights is to locate and communicate critical information to fire supervisors and other firefighting assets.

In addition to detecting and mapping fires, this operation provides ground firefighters with real-time intelligence on fire behaviour, provides commanders and supervisors recommendations when appropriate, and describes critical access routes into and out of fire areas for responding units.

Aerial Supervision coordinates all aerial assets over a designed wildfire. These aviators have been trained explicitly in advanced fire behaviour, allowing them to assess the fire and offer relevant real-time information to commanders on the ground, who need the information to make informed decisions regarding tactics and resources. Apart from air-to-ground communication, the Aerial Supervisors also oversees air-to-air communication.

They operate at a higher altitude than the other operational aircraft to maintain situational awareness and lead Attack Aircraft to where resources are most needed.

The most eye-catching and recognised operation of Aerial Firefighting, Air Attack operations, is the actual effort of applying aerial resources, both fixed-wing and rotorcraft, on to a fire.

Air Attack operations consist of dropping water, foam, or fire-retardant slurries on or in front of the fire to reduce or halt a fire's spread.

If you compare it, fighting fires from the air is much like bringing troops into a combat zone and assisting them from the air. Aerial Firefighting tactical airlift operations rapidly deliver firefighters to remote localized fires by airdrop, rappelling, or winching.

Firefighters equipped with minimal life support supplies, chainsaws, and other hand tools are airlifted to the edge of remote or inaccessible fire lines to cut and smother the burning brush.

The opposite of suppressing fires, Aerial Firefighters also fight fire with fire. Aerial Ignition operations are the deliberate effort of dropping incendiary devices to ignite backburns or planned fuel reduction burns to minimize the spread of fires.

One method to ignite a prescribed fire on a wildfire is dispensing pyrotechnic ping ball size projectiles from specially designed dispensers mounted in helicopters or unmanned aircraft.

Heat - What are the Aircraft Used in Aerial Firefighting?

Like with any complex undertaking, a wide range of fixedwing and rotary-wing aircraft supports wildfire suppression operations. Aircraft are selected for individual tasks based on their suitability for the task and their cost-effectiveness.

In the mission role of Aerial Detection and Aerial Supervision, fixed-wing light-twin piston-engine and turboprop aircraft are utilized or preferred. These types of aircraft tend to be fast, maneuverable, and have a large field of vision.

Some of the aircraft used today for this Aerial Firefighting role is the North American-Rockwell - OV-10A "Bronco," Cessna - Skymaster, and the Rockwell International - Aero Commander.

When it comes to aircraft that Air Attack or conduct "Water Bombing" operations, the primary class is fix-wing turbo and jet aircraft, i.e., from single-engine to quadjets. Additionally, these Air Tankers are categorized based on their fire retardant carrying capacity - light, medium, heavy, and super heavy.

Even though many classes, makes, and models of aircraft are used in Air Tanker operations, the following platforms can be seen regularly around the world battling wildfires: 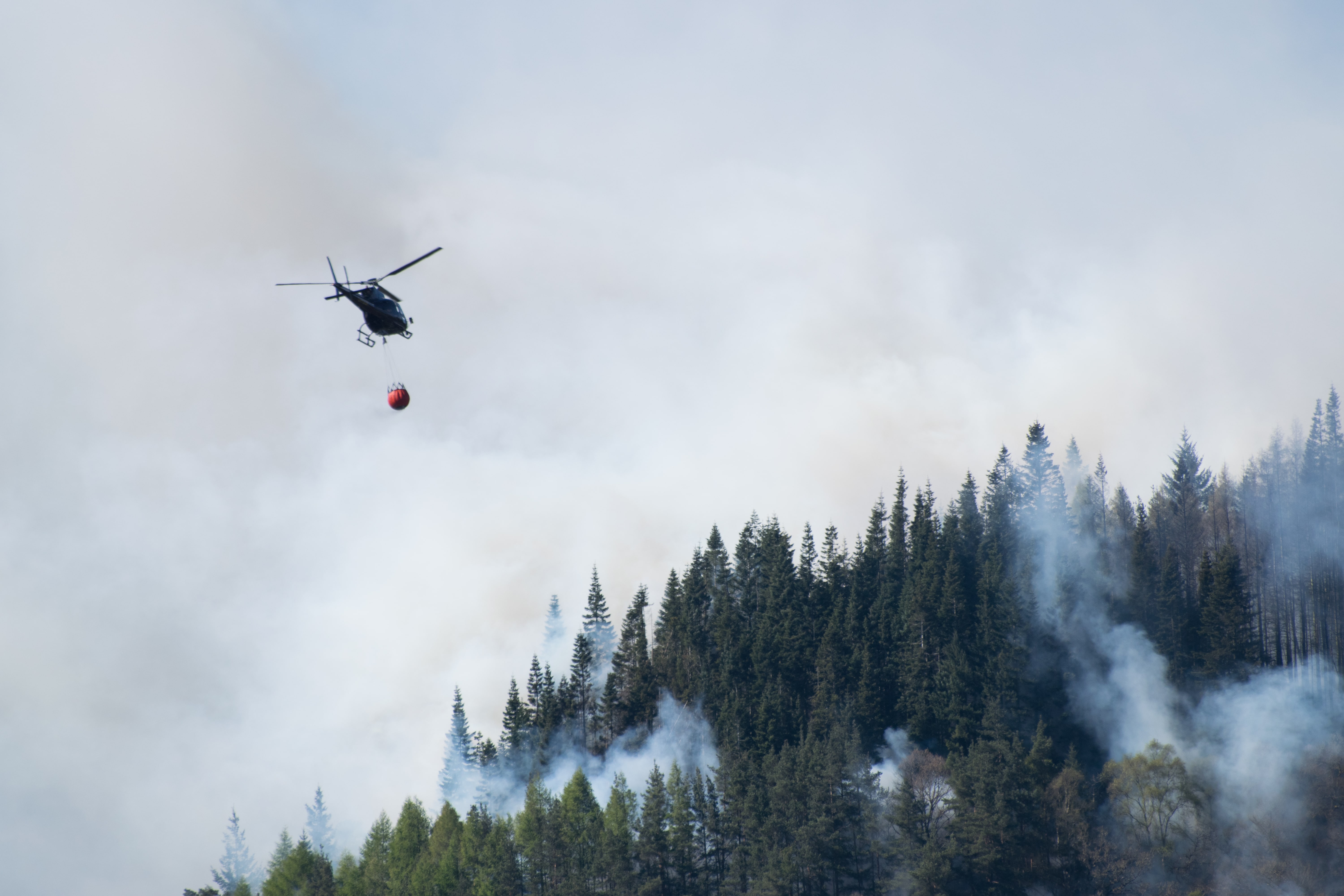 Some of the most popular firefighting helicopters include light, medium-lift, and heavy-lift platforms, i.e., Eurocopter - AS350 Squirrel, Sikorsky - S-64 Skycrane, Bell – 204/205, and the Sikorsky - S-70 Firehawk. 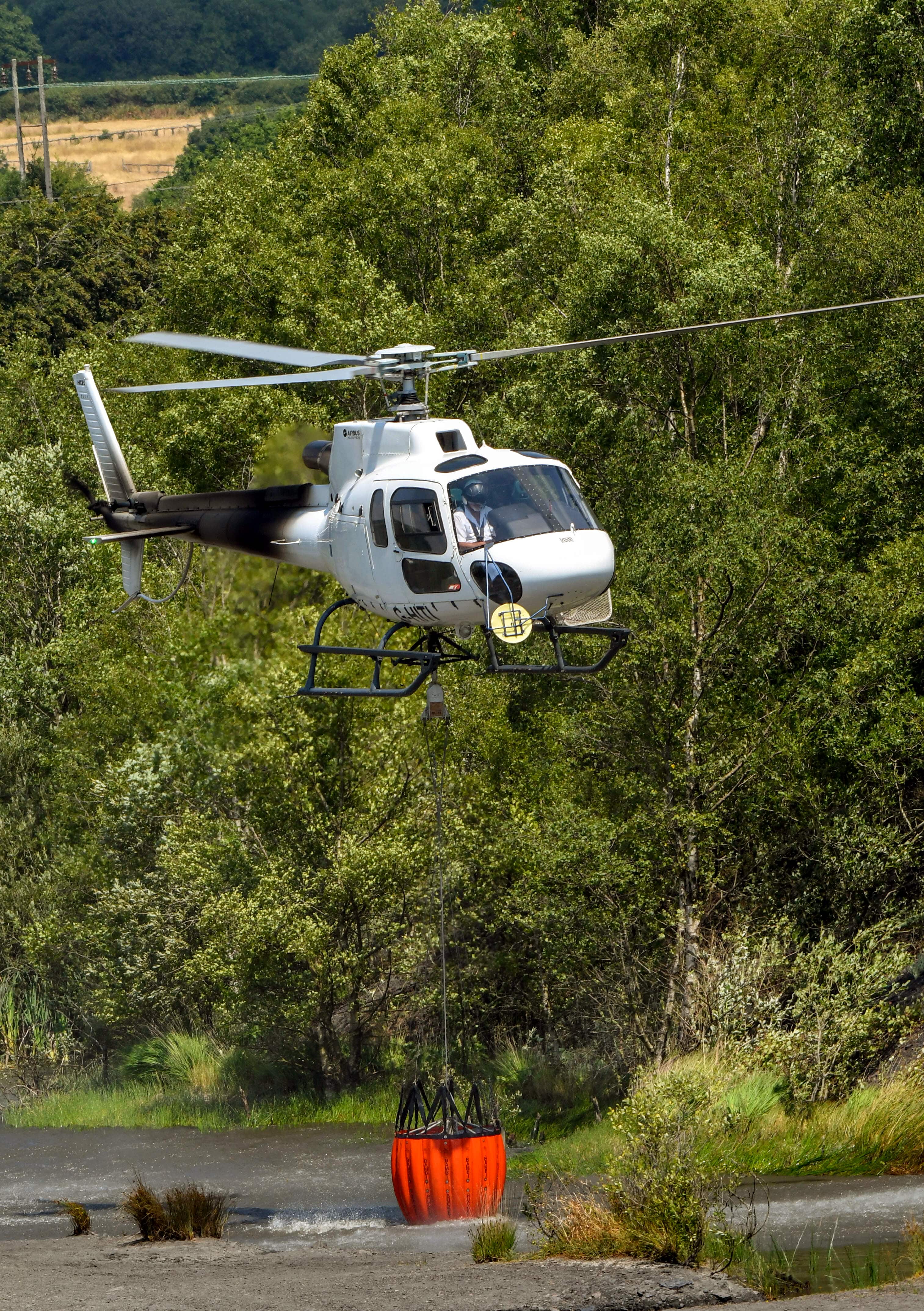 Chain Reaction - Who are the Professionals that Attack Wildfires from the Sky?

A top-notch aerial firefighter isn't a flyer – they're a firefighter with an aircraft. They understand fire behaviour and firefighting procedures. They know that Firefighting is the mission, and their expert professional skills are part of stopping these devastating wildfires. Though fighting wildfires from the air or the ground are deeply humbling and rewarding, it requires specific skills and a lot of sacrifices.

Even though the Aerial Firefighting sector is crewed by many types of highly skilled professionals that ensure firefighting operations are safe and effective, here are a couple of those skill-sets that are either the core of operations or bring a unique aspect to suppressing fire from the Air:

The Air Attack Supervisor, when assigned, leads both initial attack and extended attack operations. Their responsibilities include overseeing assets, including ground crews and other aviation personnel, and aircraft needed to control the fire and establish control lines or firelines ahead of the wildfire.

Aerial firefighter Pilots or Operators operate fixed-wing or rotor-wing platforms to contain wildfires. Their duties can include fire detection, command & control, transporting fire crews and materials, distributing water and retardant, or dropping into areas that an aircraft can only access.

Aerial firefighting pilots can expect to operate aircraft under many adverse conditions like taking off and landing on a short runway, dealing with high gross weights, flying in areas of reduced visibility, and many more.

Smokejumpers and Helicopter Rappellers (Helitack crewmember) are specially trained wildland firefighters who provide an initial attack response on wildland fires in remote areas. They are rapidly deployed by fixed-wing or helicopter assets to inaccessible locations via parachute or lowered by rappelling gear to build fire lines using Pulaski tools and cutting down trees with chainsaws.

Because both Smoke Jumpers and Helicopter Rappellers operate in isolated locations, they carry everything they need to survive and control a wildfire for up to 2 days. It's not unheard of for Jumpers and Rappellers to lug up to 120 lbs of food, water, and firefighting equipment, all while conducting strenuous and dangerous work.

As you can imagine, parachuting or rappelling from aircraft is dangerous work. These firefighters are specially trained and certified to jump or descend from aircraft utilising specialised gear. Smoke Jumpers are trained to deploy at 1500 feet and Rappelers at 250 feet from light or medium aircraft and land precisely between tall trees while carrying their heavy gear and equipment.

When it comes to the future and the forecast of ever more devastating wildfires blazing worldwide, Aerial Firefighting will do even more. Like the "Fire Tetrahedron" model, Aerial Firefighting is indeed the oxygen, fuel, heat, and chain reaction of keeping the world safe.