How will the recently-announced upgrades to the Airbus H125 strengthen the model's already firm hold on the aerial works market? Read on to find out...

Airbus Helicopters’ powerful and versatile H125 single-engine helicopter has been an industry fixture in the aerial work sector worldwide. Now it's even more attractive following the announcement of a substantial performance increase as well as a redesigned cockpit to improve visibility and situational awareness.
The performance gain is achieved by making full use of the available power from the helicopter’s Safran Arriel 2D turboshaft engine. Certifying the additional output will mean that external and internal payloads will increase by up to 308lbs at higher density altitudes, and the hover ceiling out of ground effect (OGE) will be improved by more than 1,500ft – up to 12,600ft.
When the H125 is equipped with the BLR FastFin tail rotor enhancement and stability system, the total gain is up to 419lbs of external and internal load lifting capabilities and the hover ceiling OGE rises by 2,300ft - up to 13,400ft - compared to the current H125 performance.
Use of the extra power is due for certification this summer and will be included as a standard feature on all new-build H125s with no price increase.

A retrofit solution will be available by the end of 2020 for all H125s equipped with the Vehicle and Engine Multifunction Display (VEMD) and will consist of only a simple VEMD software upgrade.

VEMD is an Airbus development for the management and control of the primary aircraft and engine parameters. It reduces pilot workload and fosters a heads-up approach to flying, giving the pilot more time to focus on the external environment thanks to a quick and easy instrument scan, excellent visibility and optimised ergonomics.
The H125 will also now provide increased operational simplicity thanks to new options that enhance visibility and pilot awareness. A more compact and simplified instrument panel with its surface area reduced by 40% incorporates a Garmin G500H TXI touch screen.
A remote First Limit Indicator (FLI) solution developed by California-based AKV Inc enables the display of the main VEMD engine parameters on a smartphone or a tablet via a Bluetooth connection, while keeping external loads in sight.
Two additional upper windows are provided to greatly improve upward visibility and the Maximum Pilot View Kit (MPVK), provided by Swiss Rotors Services, boosts the precision and safety of aerial work operations by considerably increasing the downward field of view of pilots.
Airbus Helicopters Head of the Intermediate Single Program, Axel Aloccio, said: “The extra power offered by the H125 raises the bar within the single-engine helicopter market to reach levels never attained up to now by such platforms and confirms the superiority of the H125 in terms of payload and value for money.
“And our new options for the aerial work market segment will not only simplify our customer’s daily missions, but more importantly, will further increase the safety of these very demanding operations.” 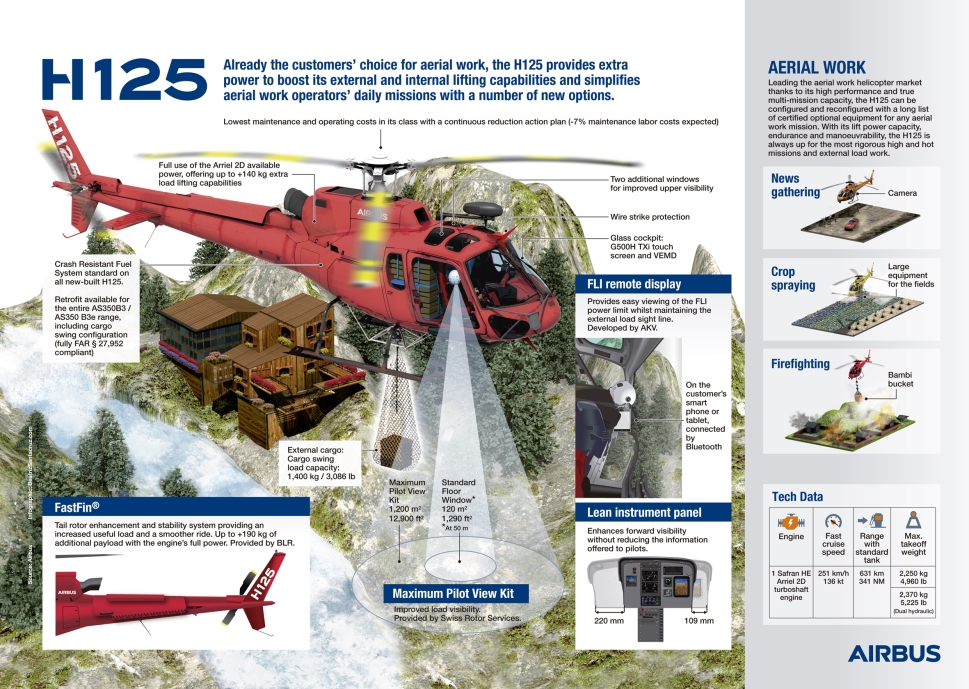 Airbus H125: 74% Aerial Work Market Share
With more than 4,000 helicopters in service with about 1,500 global customers, the H125 continues to be a leader in the single-engine helicopter market thanks to its high performance and multi-mission capacity.
In the last 10 years 630 H125s have been delivered for aerial work, representing a 74% market share. There are currently about 1,600 H125/AS350 helicopters dedicated to aerial work operations, having accumulated more than 10.6m flight hours.
Other Airbus Helicopters Ideal for Aerial Works
The H125 is only the lightest of the Airbus Helicopters range of aircraft offered in the aerial work sector for multiple roles. In the air crane role for example the H125 currently can carry up to 1,500kg in a cargo sling, but at the heavier end the H225 can take up to 4,750kg, allowing safe carriage of heavy loads in hostile or inaccessible areas.
For the growing offshore wind-power support task, helicopters are increasingly being used as wind farms are located further out to sea. They offer greater speed and comfort compared to surface vessels, particularly in rough sea conditions.
The new H160 and H175 are ideal for passenger transport to and from the platforms, but the H135, H145, Dauphin and Super Puma are all used for construction, repair and inspection crews as well as search and rescue.
Airbus helicopters are equally at home onshore in support of electrical grids around the world. In France AIRTELIS operates the H225 for maintenance and construction work on high-voltage power lines while in Italy, grid operator Terna flies two H125s on surveillance and maintenance missions along more than 63,500km of lines.
The H125 is also the helicopter of choice in the global electronic newsgathering (ENG) world in which its low vibration levels support professional filming requirements and its large cabin allows the carriage of the full complement of news equipment such as gyro-stabilised cameras, downlink transmission systems, and radio communications.
And in Japan, where ENG is widespread, the H135 and AS365 Dauphin are also used in the role and collectively Airbus Helicopters provides some 70% of the national fleet.
More information from www.airbus.com