Agusta is a highly regarded name in the history of VIP and Corporate turbine helicopters, with the modern variants of its twin-turbine A109 brand still in production today under the Leonardo umbrella. 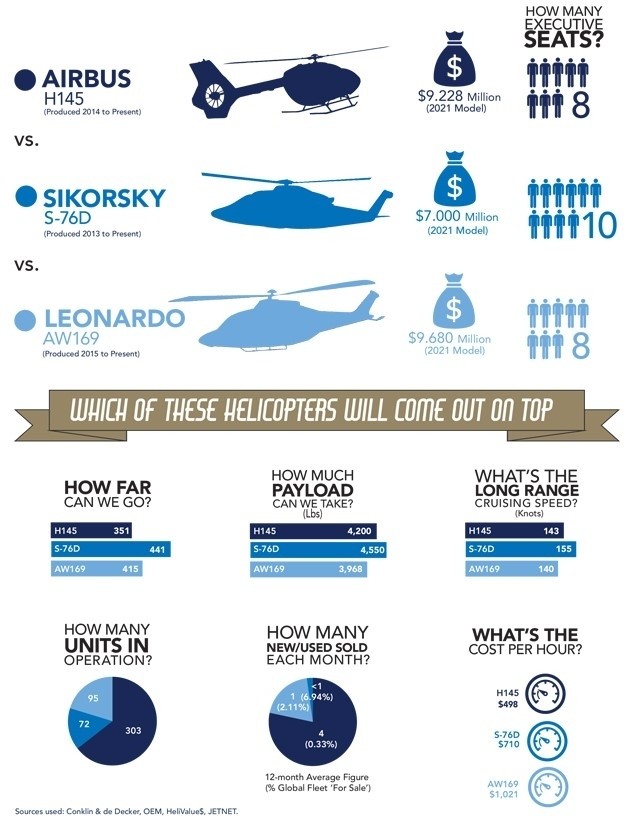 Price: USD $485,000 Price Reduced
North America + Canada, United States - NV, For Sale by Oceania Aviation
Price Reduced! USD$485,000 This EMS configured AW119 is the last of the fleet we have located in our Nevada base.
ContactContact Compare Aircraft More Info

See the most popular Agusta models we have on offer today...

The Agusta A109 helicopter line began life in the 1970s with the Agusta A109A. Agusta updated the family several times over the decades, both as a stand-alone entity, and then as part of AgustaWestland (a Finmeccanica subsidiary that was established in 2000).

Finmeccanica changed its name to Leonardo in 2016, with AgustaWestland helicopters now known under this brand.

The A109 family was a great success for Agusta over the years, and remains key for Leonardo today, under the AW109 name.

The company launched a number of variants of the A109 before becoming AgustaWestland. The A109A began deliveries in 1976. It was a market innovation at that time, thanks to the speed and redundancy provided by its twin engines.

The lightweight helicopter can carry up to six passengers, though typically in passenger transport configuration it holds five, with two in armchair seats and three in a rear-facing bench seat. The A109A is powered by two Allison 250-C14 turboshaft engines.

The Agusta A109A MkII was launched in the early 1980s, introducing more powerful 45 shp Allison250C20R/1 turboshaft engines to the platform.

The next aircraft in the line that was, in part, pitched to VIP and corporate operators was the Agusta A109C, a significant upgrade on its predecessor. The A109C brought an improved transmission system, stronger undercarriage and a higher gross weight, and is fitted with Rolls-Royce 250C20R1 engines.

Other improvements introduced through the A109C included the addition of a composite main rotor. The A109C brought a number of benefits, notably the provision of extra space, made possible by the introduction of modified doors and a number of other upgrades.

Following on from the A109C was the Agusta A109E Power, which came to market in the mid-1990s. It is based on the airframe of the A109K2, a variant of the brand usually deployed in parapublic roles (such as police or HEMS work).

The A109E Power brought a number of improvements to the long-running line, particularly through the addition of new engines, with versions of the platform coming with either Turbomeca Arrius 2K1 or Pratt & Whitney PW206C engines.

The upgraded aircraft offers business operators all the benefits of the A109 range, combined into an aircraft that truly packs a punch. The stretched Agusta A109 Power Elite could prove an attractive option for those who require more capacity in their aircraft.

A109 Legacy Continued Under Leonardo

The A109 brand remains successful today under the control of Leonardo, with the major focus being the AW109 GrandNew and the AW109 Trekker.

With over 25 years of trading, AvBuyer is the primary marketplace for turbine helicopters, offering the best new and pre-owned turbine helis for sale.