Movie Pilots: When Helicopters Fly for the Stars

Fred North has carved out a niche flying helicopters as camera-ships for Hollywood blockbusters where skill and attention to detail allow the capturing of just the footage the director wants. Something that will always be difficult to do with drones…

If you want a great shot for an action movie, having the option to use a helicopter can provide something unique...

Fast-moving, often low-level, and often following other vehicles as the action plays out, it requires planning, concentration and skill that only a select breed of highly experienced helicopter pilots — the stunt film pilots — can provide. They often have thousands of flight hours and have developed an innate sense of what constitutes a good shot.

Fred North is one of these pilots. Born in Africa to French parents who were teachers, Fred moved to Europe at 19 — his interest in flying having already kicked off thanks to watching military helicopters in Senegal as a small child.

But it was a later flight in an Aérospatiale Alouette II, doors off (being on a photo mission) that really inspired him to learn to fly.

North obtained his commercial pilot licence for helicopters in France when he was only 21 and started out offering flights in a Bell 47. Then, when he’d done around 1,200 hours of flying, he was employed doing utility and rescue work in the French Alps and then flew TV cameras for events such as the Tour de France and Formula One Grand Prix.

During this time North realised the difference between flying/filming at 500 to 1,000 feet above the action, and low-level chases where the camera can get ‘up-close and personal’ with the subject. Then in 1996 a camera operator in the US recruited him for a film shoot in Venezuela.

After earning what he would usually make in a year flying TV cameras, and feeling increasingly that he wanted to try something more creative, North realised where his future lay.

Now a pilot with more than 20,000 hours, North can look back on a career of 26 years working on some 200 films — including some of the best-known franchises of the era, such as San Andreas, Spectre, and Mission Impossible-Rogue Nation. 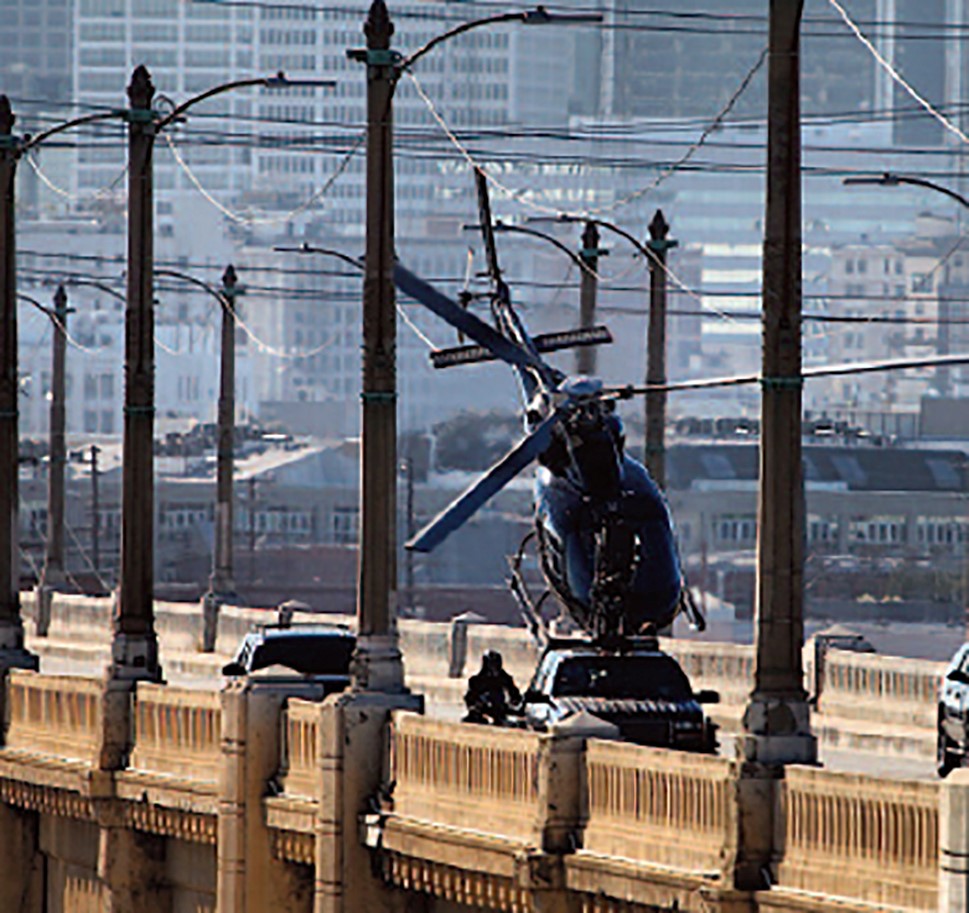 Naturally this experience means he is still sought after by directors across the industry when they need an expert who can translate their vision for a scene into dynamic footage via creative flying.

With drones now part of the TV/film-maker’s toolkit, you could be forgiven for thinking the days of having a helicopter camera-ship are numbered. North begs to disagree, and in fact sees very little overlap between manned and unmanned flying for movie-making.

These days he has a Eurocopter AS 350B3, a three-bladed, five-passenger turbine (which these days is sold new as the Airbus Helicopters H125, and in North America as the H125 ‘AStar’).

Given its almost 900 horsepower and a gimbal-mounted camera at below its nose, North has a highly capable tool for capturing film while he is trusted as someone with a firm eye on safety when filming dynamic action sequences that could be considered risky.

Beyond that, when on location North often knows where to go to hire local helicopters for filming, from providers that can be trusted to maintain their aircraft properly while also being happy for them to be used for filming assignments.

It is essential, he says, that you can trust your chosen ship when flying at highspeed close to vehicles and structures, close to the ground or challenging terrain, and even through tunnels and under bridges.

As with any flying, if you fail to plan, then you plan to fail. With movie shoots, says North, you start with the desired outcome, plan the mission, review and address any potentially unsafe aspects, learn everything you can about the environment, and ensure your crew (both on board and on the ground) know the mission – all well before you even think about getting in the aircraft.

North says walking through a complicated sequence up to ten times is not uncommon, and even that only comes after several weeks of planning — from liaising with the movie-makers on how to meet their requirements, pricing it all up, and looking at execution in increasing detail.

Some of the preparation time usually involves obtaining approvals and negotiating the removal of low-level obstacles (e.g. street lights, signs, overhead wires). Involving the regulator (the FAA in the US) early and treating them as part of the team can help smooth things out, says North.

It’s important to understand the director before working for him or her. North does his homework by watching the director’s last couple of films, paying particular attention to how the action sequences have been approached. 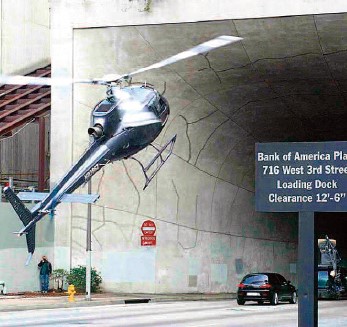 Then, he says, come meetings with the producer, director of photography, production designer, assistant director, to fully understand the goal. Meanwhile the helicopter is prepared and fitted with the equipment needed to carry out the mission.

Usually, the equipment consists of a gyro-stabilised nose mount with a camera capable of matching the quality of footage being gathered on the ground. Counterweights are used in/on the aft of the aircraft to balance out the weight of all this.

North generally works with a photographer he knows and trusts. Working as a team, once a mission starts they don’t speak much as the flying/filming has all been planned in advance.

As the pilot, North keeps his eye on two monitors, while the camera operator has one. This helps both to know what is being filmed while the director can also see this as the video is transmitted in real time to the ground.

Above image - Fred North pulls a ‘Police Helicopter’ to a quick stop as an Alfa Romeo ‘escapes’ into a tunnel. In this case, North was flying what is known as a film ship as opposed to the camera ship. This was filming an Alfa Romeo commercial in downtown Los Angeles. (Photo courtesy of Fred North)

So might it be safer with a drone after all? North believes choosing between a drone and a helicopter is not so much about safety as the end-goal.

He believes that by personally flying the camera, he is more aware of various aspects such as perspective, depth perception, spatial orientation, timing and the feel that gives the movie audience that ‘wow’ factor.

After a busy day’s flying and filming North tries to get some quiet time to analyse the result, and to see if everything went to plan.

North says that aspiring movie pilots should challenge themselves as they add flying experience. While sightseeing tours build time, more complex flying such as cargo lifting, search and rescue, and even firefighting, stretch your limits and teach you new perspectives.

Even if you don’t have a helicopter, you can start out with a camera rig so you can provide it alongside your services as pilot — something North did for five years.

But even a good pilot needs also to have a good ‘eye’ for lighting, and for composing and framing shots. But with the right attributes, he believes there is always room for new talent.

How Aerobatic Flight Training is the Great Level...
Does Your N-Reg Aircraft Need To Be Exported?
Who are the 'Calibrators' of Aerial Work Aviatio...