Announcing a new ultra-long-range, $75m flagship for its fleet, Dassault has unveiled the Falcon 10X. Designed to compete head-to-head with the Bombardier Global 7500 and Gulfstream G700, here are the details...

Over recent years, the Ultra-Long-Range business jet envelope has been extended with the introduction of Bombardier’s Global 7500 and development of Gulfstream’s G700. Now Dassault has thrown its hat into the ring, announcing the Falcon 10X twin-engine jet, which it says will enter the market at the end of 2025.

Capable of non-stop flights of up to 7,500nm, from New York Dassault's newly announced Falcon 10X will be able to fly its passengers to any point in Europe, most of Africa, and as far as Bangalore, without stopping.

How Much Will the Falcon 10X Cost?

With various industry sources quoting a $75m price, the Falcon 10X offers a top speed of Mach 0.925, and it will be powered by a pair of Rolls-Royce Pearl 10X engines, representing the first time Rolls-Royce powerplants have been used on a Dassault business jet.

Moreover, they will be able to run on 100% sustainable aviation fuel for operators wishing to do so.

The wing of the Falcon 10X is designed for optimal efficiency at high cruise speed, and for optimal safety at low speed and while landing on short runways. This is partially achieved through an expanded wing span, while the wings themselves are constructed from carbon fiber composites, helping avoid any resulting increase in weight. 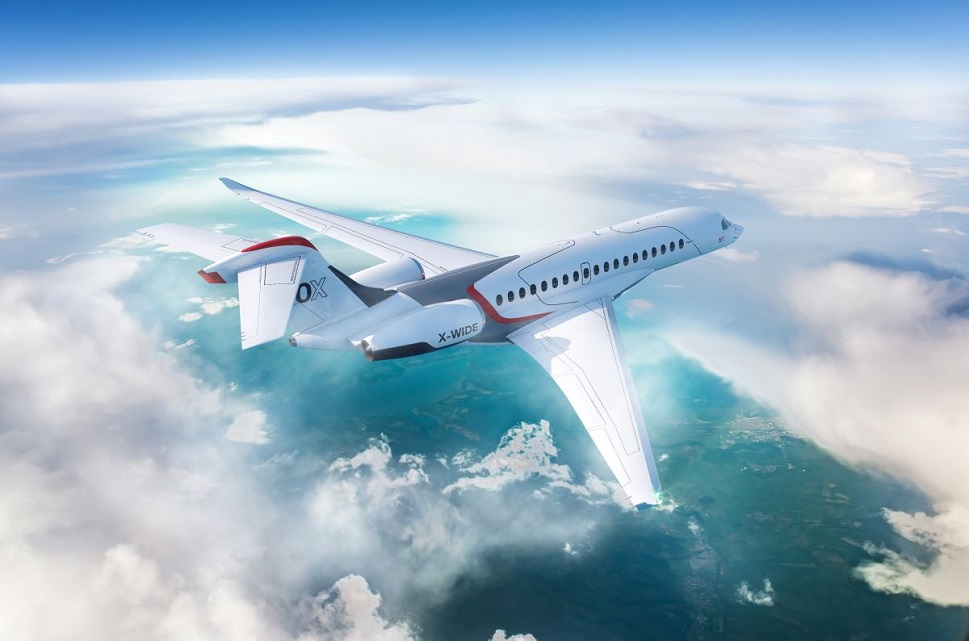 According to Carlos Brana, Executive Vice President of Civil Aviation at Dassault, passenger comfort is a key feature for those 15-hour-plus legs, and Dassault is looking to “redefine the passenger and pilot experience”, with the intention of offering a seamless flight experience. Providing a bigger cross-section than even the Falcon 6X, the cabin stands at 6ft 8ins tall and spans 9ft 1in.

The cabin’s length allows for the Falcon 10X to be divided into four lounge areas, and its dividers can be positioned according to individual customer preference, enabling the expansion or shrinkage of each zone when being installed at the factory. Indeed, passengers can choose from multiple cabin configurations with the interior designed to offer “greater modularity than other aircraft in its class” according to Dassault.

As one of the biggest inhibitors of productivity, fatigue is addressed in the Falcon 10X with Dassault promising a very quiet noise level in the cabin. Dassault reckons this will be “at least as good” as on the Falcon 8X). Exceptional air purity will also be facilitated through the latest generation cabin air filter technology, ensuring customers arrive fresh at their destination. And, the cabin pressure will remain at 3,000ft even while the aircraft is flying at FL410. 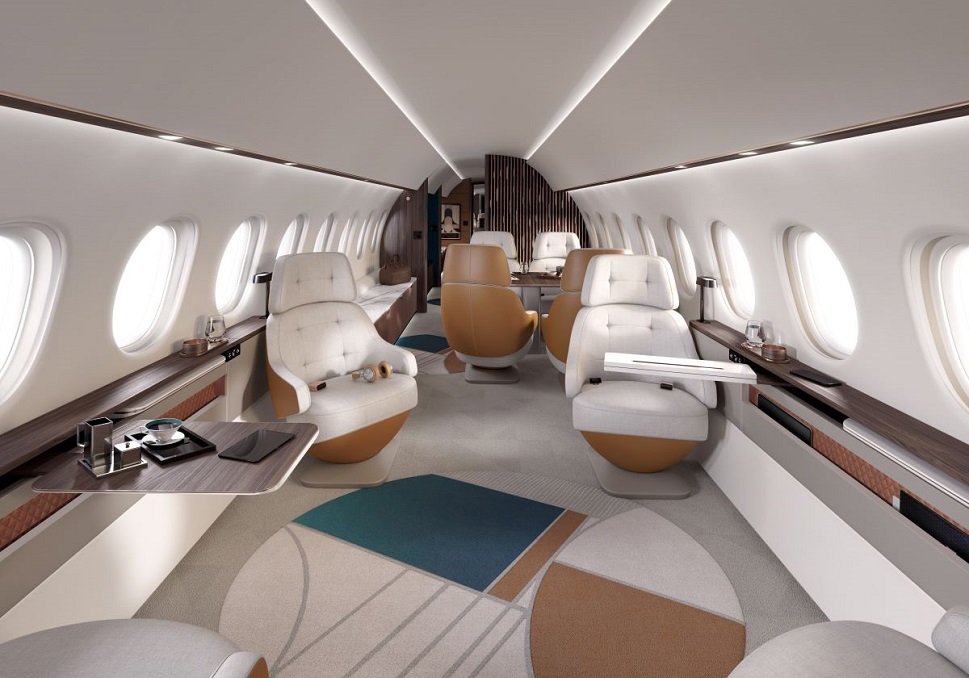 The interior itself is being described as a ‘Penthouse in the Sky’ by Dassault, with passengers able to work, dine and rest in the spacious environment. No space is wasted, according to its designers.

In the entryway is the crew rest area that can also be used as a seating area to chat opposite the galley. Here, two windows provide plenty of natural light, while an oven, chiller, and all the necessary equipment to enable quality food preparation is installed.

Running throughout the cabin, passengers will notice the increased size of the windows. They’re nearly 50% larger than those installed on the Falcon 8X, and Dassault believes this will make the cabin of the Falcon 10X the brightest in the industry.

In addition to a comfortable lounge area, other cabin zones include a dining area akin to a restaurant dining experience – seats in this zone are designed to track backward and forward, enabling the table occupants to move without disturbing others around them. 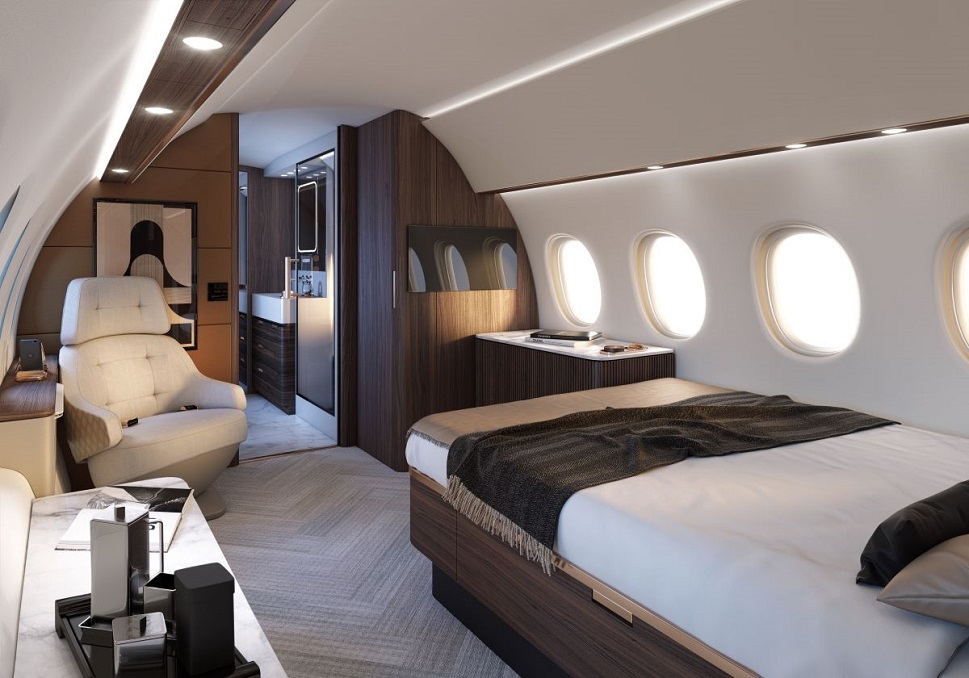 And a state room is also included, serving as a master suite, and accommodating a 50- or 60-inch bed. It includes a closet and seat, and all the functionality required to dine, rest and work within the space.

An en suite bathroom is located to the aft of the aircraft, benefiting from the natural light of four windows, and containing a stand up shower.

Throughout the Falcon 10X's cabin, Dassault’s designers have tried to incorporate as little technological hardware as possible, describing it instead as a ‘smart cabin’. The lighting and cabin environment can be controlled from the passengers’ personal electronic devices with the ultimate goal being that they “don’t even need to think about it – but have it to hand when they need it”. 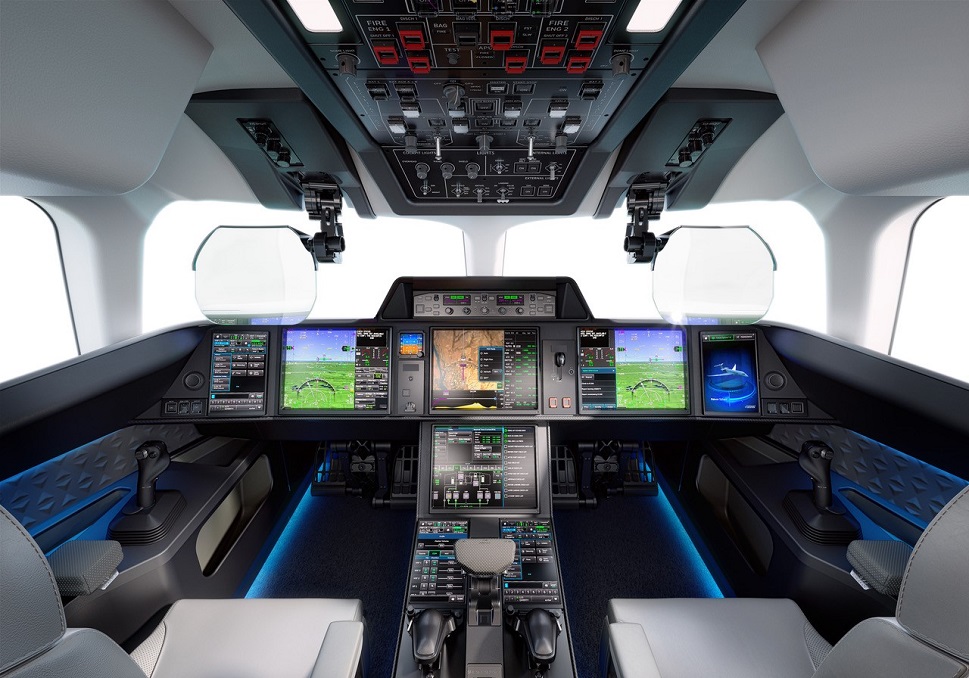 The cockpit includes fully reclining seats, and the level of automation built into the jet allows for one pilot to fly the jet while the other rests in the cockpit. The overall goal of the aircraft is to drastically reduce pilot workload.

A single smart throttle will serve as the primary power control, connecting both engines to the Digital Flight Control System which will automatically manage the power of each engine as needed in different flight scenarios.

Dassault’s FalconEye combined vision system will combine with dual HUDs able to serve as primary flight displays, meaning that the Falcon 10X will be capable of operating in what are essentially zero ceiling/visibility conditions.

Find out how the Falcon 10X fits with AvBuyer's assessment of Business Jet OEM Product Gaps, published earlier this week.