Gulfstream Aerospace has announced two new business jets, the Gulfstream G400 and the G800. The jets are expected to cost $34.5m and $71.5m respectively.

Gulfstream's new G400 will fill a perceived gap in the Large Cabin business jet sector that Gulfstream previously exited when it stopped producing the G450 in 2017, while the manufacturer will be expecting the G800 to recapture top spot in the Ultra-Long-Range jet market.

Having dominated Ultra-Long-Range Business Aviation travel for several years with its G650/G650ER model, the arrival of the Bombardier Global 7500 to market, and announcement of Dassault’s Falcon 10X will undoubtedly have turned up the heat for Gulfstream to respond with a model that will help reassert its position at the top of the range-map.

Mark Burns, President of Gulfstream described the new $71.5m G800 as the “capstone” of Gulfstream’s fleet during the online launch which saw the first G800 test plane rolled out. Due to enter service as soon as 2023, the jet will be powered with the same Rolls-Royce Pearl 700 engines that were selected for the Gulfstream G700 helping the G800 push the Ultra-Long-Range boundaries to 8,000nm at Mach 0.85, or 7,000nm at Mach 0.90.

"The Pearl 700...brings together our latest technology to deliver outstanding efficiency," said Dr. Dirk Geisinger, Director Business Aviation, Rolls-Royce. "It is part of our commitment to reach net zero operations and has already proved its ability to run on 100% sustainable aviation fuel. We are now in the final phase of the engine certification program and everybody at our team is fully committed to support a smooth entry into service of the Pearl 700 next year.”

The G800 will also share the wing and winglet design introduced on the G700. Meanwhile, Gulfstream’s Symmetry touchscreen flight deck features in the cockpit, which also includes a Combined Vision System displayed via a dual Head-Up displays, and (an industry first) the incorporation of Active Control Sidesticks.

The cabin is designed to seat up to 19 passengers, and can comprise up to four living areas. Featuring the signature ‘Gulfstream Cabin Experience’ with 100% fresh air (never recycled), exceptionally quiet cabin environment, low cabin altitude of 2,916ft at Flight Level 410, and 16 Gulfstream panoramic oval windows designed to maximize natural light within the cabin environment, Gulfstream is confident the G800's cabin will deliver what it says its customers have been asking for, and more.

Until the announcement of the new G400, the Large Cabin business jet sector has primarily been contested between the Bombardier Challenger 650 and Dassault Falcon 2000S/LXS, and more recently the 4,018nm Embraer Praetor 600 has also entered the scene.

Previously, Gulfstream enjoyed significant market success within the sector with its Gulfstream GIV and GIV-SP models, and later with the (old) G400 and G450 programs. A combined 880 jets were produced across all four models between 1986 and 2017 (per AMSTAT data).

Since then, the Savannah, Georgia-based OEM has focused a significant portion of its effort on enhancing and expanding its Ultra-Long-Range jet market presence. But with the Challenger 650 and Falcon 2000 models being derivatives of older jet models, Gulfstream will feel bullish that its clean-sheet design can win customers, and once-again claim a significant Large Cabin market share. 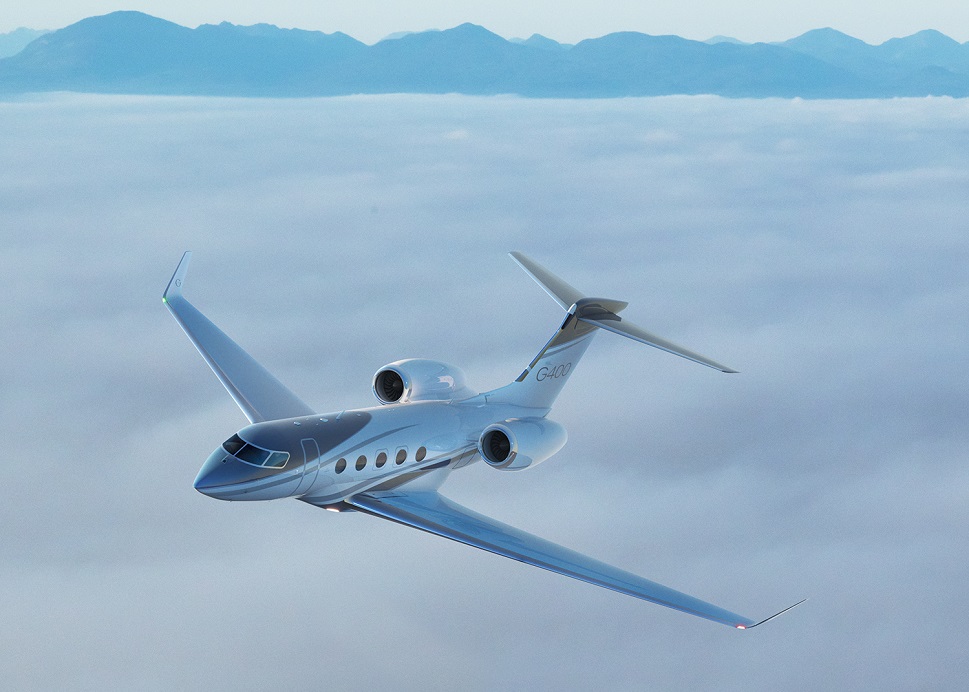 “Gulfstream was the launch customer for the PW800 engine family, when the PW814GA-powered G500 entered into service…followed by the PW815GA-powered G600,” Maria Della Posta, President, Pratt & Whitney Canada commented. “The PW800 engine on the G400 will bring a new level of performance and efficiency to the large-cabin business aircraft class,” she promised.

The engines (along with Gulfstream’s aerodynamic clean-wing design) will enable the G400 to ramp up environmental performance, “reducing fuel consumption, emissions, and noise”, according to Gulfstream.

As with the G800, pilots will enjoy Symmetry touch screen flight deck technology in the cockpit, while G400 passengers will appreciate what Gulfstream claims to be the largest cabin in its class, seating up to 12 passengers, with a forward galley. As aboard the G800, the G400 will offer 100% fresh air in the cabin, what Gulfstream says will be the lowest cabin altitude in class (3,255ft at flight level 410), and Gulfstream’s unmistakable panoramic oval windows, flooding the cabin with natural light.

Expected to cost $34.5, it is believed the Gulfstream G400 will make its first flight within eighteen months. It's certainly priced competitively, with the Bombardier Challenger 650 costing $32.4m, the Dassault Falcon 2000S costing $28.8m, and the Falcon 2000LXS priced at $35.1m, according to Aircraft Bluebook data. The Embraer Praetor 600, meanwhile costs $20.995m.

Did the Industry see These Jets Coming?

In the lead-up to Gulfstream’s announcement, René Armas Maes, Editor, Buyer Strategy and Finance for AvBuyer issued a LinkedIn poll asking what respondents thought Gulfstream’s plans could entail for the OEM’s portfolio development.

In May 2021, Armas Maes highlighted in his article Business Jet OEMs: Where are the Product Gaps that space existed in the market for a new 4,250nm-4,750nm range jet that Gulfstream may exploit.

His recent poll drew more than 125 votes, with 39% electing for an official launch of a new, clean-sheet design 4,250nm to 4,750nm platform, enabling Gulfstream to once again penetrate a market segment it once dominated.

“A new, clean sheet product in this sector of the business jet market will certainly push Bombardier to develop a new product; it does need to replace its 40+ year-old Challenger 600 platform,” Armas Maes said.

A larger percentage of respondents believed Gulfstream would refresh or upgrade its G280 Super Mid-Size Jet, particularly considering the recent launch of Bombardier’s Challenger 3500. “Gulfstream officially launched its Gulfstream G280 in 2011, and it could be argued the aircraft is due an upgrade, per the industry’s seven-to-eight-year average refresh cycle for business jet models,” Armas Maes continued.

While a further 13% of poll respondents predicted a quick upgrade to the G500 and G600 models (launched in 2015 and 2017, respectively), a much lower percentage (7%) of voters expected another product or announcement (which included anything in the G800's category).

Regarding the Gulfstream G800 launch, Armas Maes added, “Gulfstream may have an eye on staying ahead of the curve, and specifically keeping a step ahead of any potential upgrade to the Global 7500.”