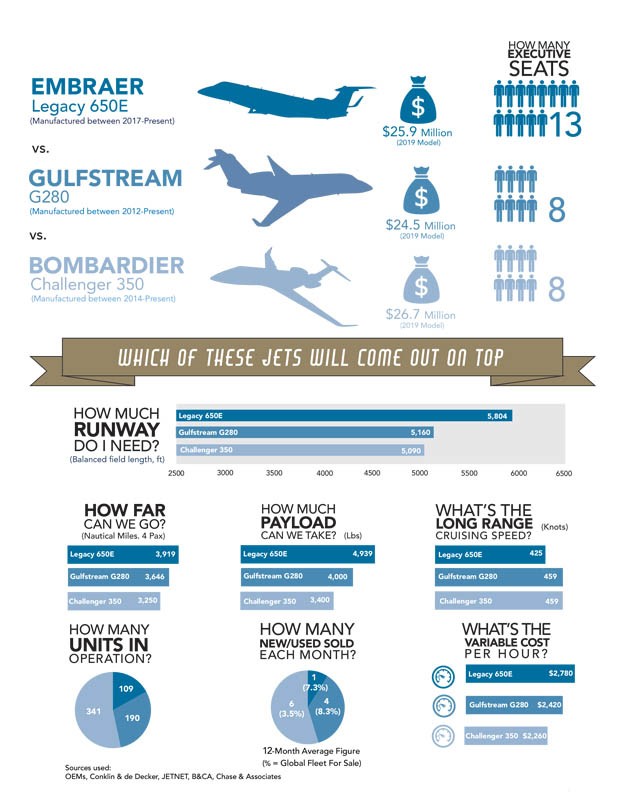 On Programs
Turn-key
No major maintenance coming due

The larger Challenger 600 series was initially developed by Canadair in the 1970s, before the Canadian company was acquired by Bombardier in the 1980s. The Challenger 600 was typically designed for between nine and 12 passengers, and offered all the benefits of a Large Jet. In fact, it was later developed into the CRJ100 and CRJ200 family of regional airliners.

The Challenger 604 was introduced next, followed by the Challenger 605, and each model was built with progressively more powerful engines, improved performance, upgraded airframes and other developments.

Subsequently, the Challenger 650 – launched in 2014 – has established itself as Bombardier’s best-selling Large Jet platform. The aircraft can hold up to 12 passengers, and its Bombardier Vision flight deck offers Synthetic Vision System, MultiScan weather radar systems and a range of other features. The aircraft incorporates a Collins Aerospace ProLine 21 Advanced avionics suite with four large displays, a dual flight management system with LPV and RNP approach capabilities, a Dual Inertial Reference System.

The Bombardier Challenger 300-series of Super Mid-Size Jets has been on the market since 2004, and was launched as the Bombardier Continental at the Paris Air Show in 1999.

The Challenger 300 was a ‘clean sheet’ design, offering a bridge in Bombardier’s product range between the upper-end of the Learjet series and the larger Challenger 600-series platforms. Typically configured to seat nine and offering a range of 3,065nm, the Honeywell HTF7000-powered Challenger 300 incorporates a ProLine 21 avionics suite.

In 2014, the Challenger 350 jet replaced the Challenger 300 on Bombardier’s production line, and is an improved, modified version of the original. Among the improvements are increased passenger comfort levels from an all-new cabin; increased performance from the new twin HTF7350 powerplants; increased aerodynamic efficiency with new canted winglets; and the ability to fly eight passengers 3,200nm.

The Challenger 350 can hold up to 10 passengers, and has a Collins Aerospace ProLine 21 Advanced avionics suite. It has one of the largest and quietest cabins in its class, according to Bombardier, and the lowest in-class operating costs, thanks to its longer maintenance intervals, low parts cost and increased efficiency and reliability.

The OEM also highlights the Challenger 350’s steep approach and short-field performance capabilities, with the ability to operate in and out of a number of challenging airports.

With over 25 years of trading, AvBuyer is the primary marketplace for private jets, offering the best new and pre-owned jets for sale. You can read the latest edition of AvBuyer magazine online or visit our online actionable intelligence resources.