Engine overhauls are expensive, particularly for operators not enrolled in hourly maintenance plans and for engines undergoing their second or third overhaul. Chris Kjelgaard assesses the options available at that point…

Deciding when the prospect of an engine overhaul is just too costly to be worthwhile can be a difficult decision, and is one that different owners and operators may see differently...

The decision may depend on aircraft type, how the particular aircraft to which the engines in question are attached is operated, and even the owner/operator’s particular preference for retaining engine serial numbers it already owns and knows well.

According to Andrew Robinson, Senior Vice President, Services & Customer Support for Rolls-Royce North America, overhauls of Rolls-Royce Tay 611-8 engines installed on 30-year-old Gulfstream IVs “are still occurring, but we’ve seen other aircraft [types] which are not as old for which it is deemed not as practical.”

The cost of an engine overhaul goes up as the engine’s Life Limited Parts (LLPs) near, or reach, their cycle limits, at which point they must be replaced, according to Saathoff. Overhaul is also needed “if parts have major discrepancies and need to be replaced.” In either case, “the cost of doing an upgrade [to a new engine] becomes very close or almost equal to the cost of doing an overhaul,” he says.

What are the Options?

If the owners of run-out engines decide not to have them overhauled, they can explore a variety of options. For example, they can scrap the aircraft and engines, or try to sell them for any remaining value they have.

In some cases, they can have the engines exchanged for new ones of the same model, or for used engines which have some service life left. For some aircraft types, usually turboprops such as Beechcraft King Air models rather than jets, owners can even replace the engines with powerplants of a different type or model to improve the aircraft’s range and fuel-burn performance.

“It’s very common” for owners and operators to decide not to have an aircraft’s engines overhauled if they find that the cost of overhauling both powerplants exceeds the remaining resale value of the aircraft-and-engines combination, says James Prater, Vice President Customer Services, Business Aviation for Rolls-Royce.

However, personal preferences can come into play for certain owner and operators. “It is in the eye of the beholder, if the owner really likes the airplane,” according to Prater.

“Some operators like to keep the engine serial numbers intact,” mounted on a particular airframe. Such owners may “have more faith in components they already own, rather than dealing with an unknown engine,” even though it is exactly the same as the one it would replace.

“You’re dealing with a known quantity with your own engine. Again, [the decision] is hull- and platform-dependent,” he says.

“Pratt & Whitney Canada is of the opinion that if the overhaul cost is expected to be 80% or more of a new engine exchange price, the operator should consider replacing the engine in need of overhaul with a new one,” says Timothy Swail, Vice President Customer Programs for P&WC.

“This can be the case when significant LLPs need to be replaced, or the engine has suffered from the impact of corrosion coming from operation in a harsh environment.

"In most cases, we can definitely exchange an engine with a new one, with the proper planning. Pratt & Whitney Canada will repair and re-use what parts are still serviceable, and recycle what cannot be used,” Swail adds.

“A new engine is a great way to refresh the aircraft and benefit from lower-cost maintenance in the future with a new warranty,” Swail continues. “This option is probably best if you still have several years of planned ownership or usage ahead.

"If the ownership horizon is limited, another option is to buy a used engine that has usable hours left before a major MRO event. As an OEM, we offer quality used engines to operators that are part of our rental pool.” 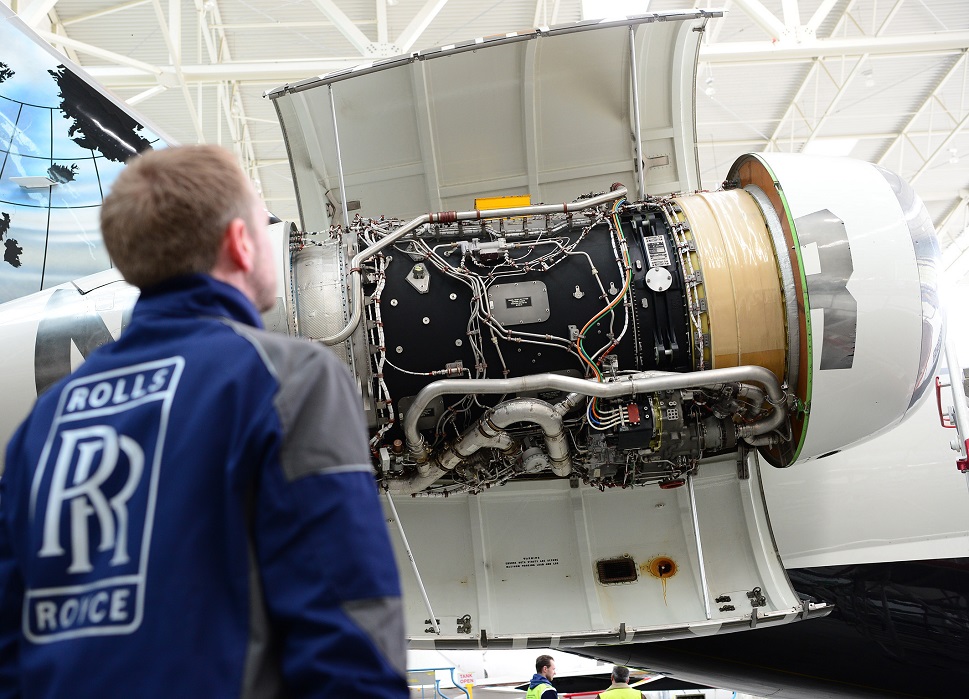 For its TFE731 and HTF7000 turbofan lines, meanwhile, Honeywell Aerospace has very similar engine exchange and sales arrangements in place to those P&WC offers for its business aircraft powerplants.

Honeywell’s arrangements under its hourly Maintenance Service Plan – Propulsion (MSP – Propulsion) include exchanges of run-out operator engines for new powerplants and also sales of used, part-life engines to operators whose time horizons for continuing operation of their aircraft such engines meet.

“Honeywell has various programs for older aircraft and engines that are later along in their useful life, including engine exchanges and sales of used serviceable engines with partial intervals remaining,” says Hans Laudon, Vice President, Engines for Honeywell Aerospace.

“These programs offer cost-effective options and may be ideal for operators that don’t need or want to achieve a full maintenance interval; perhaps an engine with 1,000 hours left until its next interval is adequate for the remaining operating life of the aircraft,” Laudon explains.

Positioned at the higher-thrust, larger-aircraft end of the Business Aviation propulsion market, Rolls-Royce “doesn’t do engine exchange as a standalone service,” says Robinson. “That’s more common for smaller aircraft. But we do have hourly and annual [maintenance] programs [under Rolls- Royce’s CorporateCare customer-support umbrella] that provide coverage for aircraft that are in the end-of-life phase, and we’re looking to develop additional options.

Engine-upgrade programs for business jets aren’t common nowadays, though in the past Dassault Falcon 20s were successfully re-engined with Honeywell TFE731s.

Perhaps the best-known relatively recent program is the Nextant 400XTi whole-aircraft upgrade of the Hawker Beechjet 400, which involved replacing the aircraft’s original engines with Williams FJ44s, and helped increase the aircraft’s range and operating speed. A similar upgrade was available on the Hawker 400XPR upgrade program.

And, according to Laudon, “Honeywell offers retrofits and conversions for the TFE731-20AR and -20BR on the Learjet 40 and 45,” but he adds, “true engine retrofits in Business Aviation are no longer as common, due to the high certification costs and the low utilization of Business Aviation aircraft compared to the air transport and regional market segment.”

However, says Saathoff, upgrading the engines of turboprop business aircraft – particularly types such as King Airs powered by models from P&WC’s long-lived, ubiquitous and extensive PT6A family – is more common.

In most such cases, the PT6As removed from the aircraft – usually performed at what would have been the scheduled time of overhaul – are replaced by more powerful PT6A models.

Such upgrades are effectively re-engining programs, though in most cases they don’t require a different nacelle installation. However, because upgraded engines improve the performance of the aircraft, various engine-upgrade programs do often involve making minor aerodynamic modifications to the airframe itself.

“Depending on your operational needs, these aircraft upgrades may represent an interesting investment, which is a different value proposition than an engine overhaul,” says Swail. 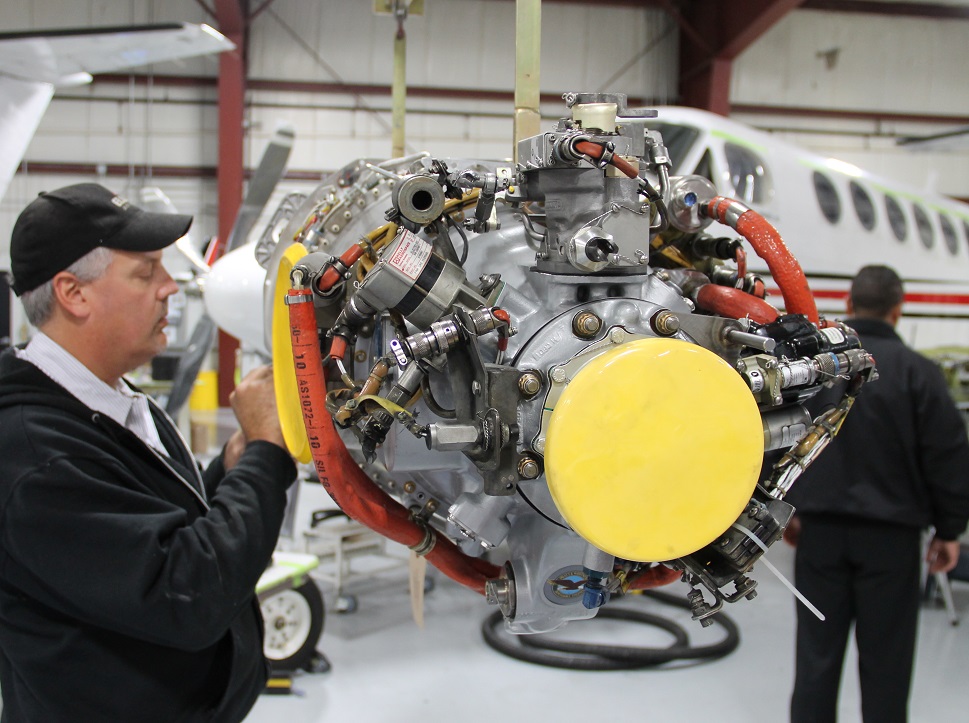 Each OEM offers a wide range of different coverage levels and other services (such as P&WC’s powerful new engine oil-analysis technology) to suit each individual operator’s budget and specific operational and MRO requirements.

“Those operators enrolled in Pratt & Whitney Canada’s Eagle Service Plan (ESP) maintenance program can use the reserved funds to overhaul the engine, replace it with new, or purchase an aircraft upgrade that includes new engines,” says Swail.

“We provide this flexibility because we know that each owner has different criteria that may favor one option over another. This flexibility is something only the OEM would provide.”

However, at the time of overhaul, operators don’t necessarily need to replace the engines on their aircraft with upgraded powerplants to obtain benefits from improved engine performance, increased part durability, better part reliability, and longer time on wing.

“In place of engine retrofits, the most common approach for improving engine capability is to incorporate product improvements and engine enhancements over time, through Service Bulletins and at maintenance intervals when otherwise opened up,” says Laudon.

“Honeywell has found that engines that routinely incorporate product improvement Service Bulletins, such as engines on MSP – Propulsion programs, have been shown to have improved overall reliability and reduced operating cost.”

However, says Laudon, “regardless of whether the operator is on MSP, Honeywell provides access to all product improvement Service Bulletins on our maintenance portal, and engine services are provided by our authorized service center network.”

Covering more than 30 different aircraft applications, according to Sean Lynch, EAP's Program Coordinator, EAP could save operators as much as $100 per hour on each engine – so is an excellent way to save money while preserving the value of the aircraft.

This is achieved, Lynch says, as EAP takes advantage of the lower cost of engine parts and services discounts available today and passes that value on to its customers. Lynch advises operators of older aircraft:

"It is safe to assume it will get sold for salvage once the remaining time is flown off, or an expensive unscheduled failure occurs.” 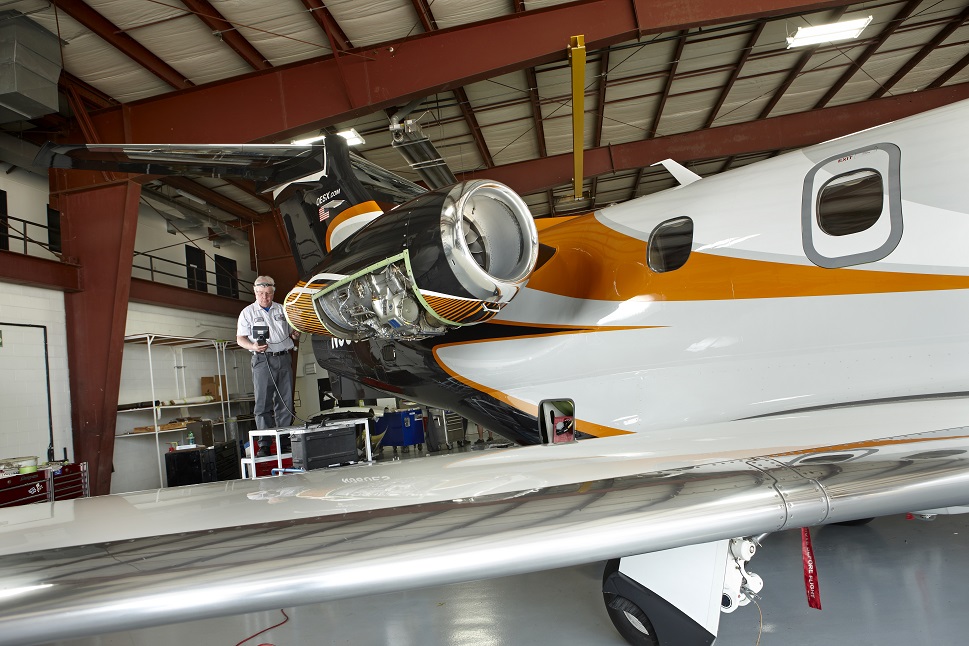 All of Rolls-Royce’s business jet engine families are maintained under on-condition maintenance programs except for the Tay, the maintenance manual for which specifies a 10,000- hour hard-life LLP limit.

Nevertheless, Tay engines also can be moved into an on-condition program, allowing time on-wing beyond 10,000 hours by incorporating borescope inspections at regular intervals before the limit is reached.

As part of the research mission of Rolls-Royce’s Life Cycle Unit, “We’re always looking to reduce shop visit cost [by improving time on wing] and to keep engine costs down by reducing the scrap rate,” says Robinson. “It’s a balance between the engine being on-wing longer, and more scrap [being generated] when it is on-wing longer.”

Under Honeywell’s usage-based MSP – Propulsion program, “Operators are eligible for a discount of up to 10% off the hourly rate for operating their aircraft under optimal conditions,” says Laudon.

“The usage-based feature provides more flexibility for MSP operators, with data they can use to further improve the operation of their aircraft. No matter how the aircraft is operated, MSP has the flexibility to adjust to the needs of the operator.”

Operators whose engines are nearing their next overhaul and think they may find the work too costly may have more options open to them than they initially thought – particularly if their engines are already enrolled in an hourly or annual maintenance program.

For those owners, it may be well worth the extra time and effort needed to explore in depth the options that are available to them.