Introduced in 1971, the Bell 206B Jet Ranger II has the same airframe as the Bell 206A but has a higher-powered 400 shp Allison 250-C20 turbine and a 200 lb increase in gross weight to 3,200 lb. This versatile 5-seat light helicopter is a good performer and in addition to being a good passenger transport is used for turbine helicopter training. 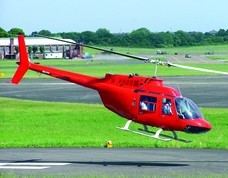 Bell 206B-3 JetRanger III vs Airbus EC-120B
The Helicopter Market During the Pandemic and In 2021
Tips for Converting Helicopters for Corporate Use
Helicopter Comparison: Bell 505 vs Robinson R66
View all Bell 206B III articles.
Showing 1 - 20 of 38 aircraft (including variants)

The Bell 206B-3 JetRanger III was one of the most popular variants of the Bell 206 single-engine turbine helicopter series – a family that was a major market success for Bell Helicopter over several decades.

Specifically, the 206B-3 can hold four passengers with one crew member. There were 2,482 Bell 206B-3 JetRanger III platforms produced between 1997 and 2010, according to JETNET data. The majority of these aircraft remain in operation around the world today, and they continue to be popular on the pre-owned market.

What features does the Bell 206B-3 offer?

The Bell 206B-3 is powered by a single Allison 250-C20B turboshaft engine. Offering a range of about 370nm, the maximum take-off weight of the Bell 206B-3 (3,200lbs) was increased when compared with its predecessor.

As already noted, the Bell 206 family has been a success story for Bell over the years, with thousands of platforms produced since the 1960s. The 206B-3 JetRanger III followed the 206B JetRanger II, which itself had been upgraded from the 206A through the introduction of a new Allison 250-C20 engine.

There have been a range of variants since then, including different iterations of the 206L ‘LongRanger’ design (more details below). A twin-engine variant, the Bell206LT TwinRanger, is also available.

Today, the range is represented by the Bell 407, which is derived from the 206L and has been produced since the mid-1990s. The most modern version, the Bell 407GXi, features a Rolls-Royce 250-C47E/4 turboshaft engine with dual digital full authority digital engine control (FADEC), and has a range of 337nm at its long-range cruise speed.

With over 25 years of trading, AvBuyer is the primary marketplace for turbine helicopters offering the best new and pre-owned turbine helicopters for sale. You can read the latest edition of AvBuyer magazine online or visit our online actionable intelligence resources  which offer insight, market data and analysis from AvBuyer’s editors and leading Biz Av industry experts.