Piaggio’s aircraft-building activity stretches back to 1915, and the company had amassed plenty of experience developing twin-engine pusher aircraft before entering the Business Aviation market with its quick and distinctive-looking Piaggio Avanti P.180 turboprop  in 1990. The P.180 has since been refined and upgraded into today’s P.180 EVO model. 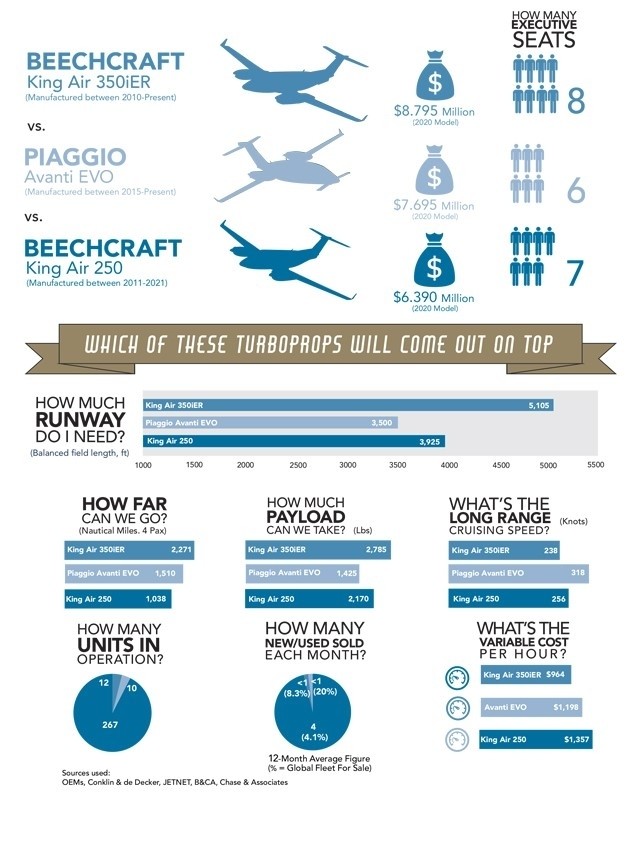 The Piaggio P180 line of twin-engine turboprops from Piaggio Aerospace has been a strong presence on the turboprop market for more than 20 years, with the latest model of the aircraft offering a range of improvements for operators.

Highly distinctive in appearance, the Avanti models utilize a radical design using a pusher-prop arrangement in which the engines are reversed on the wing. The wing itself is placed behind the passenger cabin, and a small forward wing is mounted at the end of the nose cone.

Since coming to the market, the Avanti aircraft have built a reputation for its generous cabin volume (on a par with larger jets), and high cruise speed capability.

The Italian company’s first model for Business Aviation was certified in 1990, though production did not begin until later in that decade. The eight-passenger, two-crew Piaggio P180 Avanti is usually configured to accommodate six passengers and has a range of about 1,500nm.

Over the years, the line has attracted considerable interest from both private and corporate users.

In December 2020, the P180 Avanti and its successor aircraft – the P180 Avanti II and the Avanti EVO – hit a major milestone, notching up one million flight hours, according to Piaggio, since the first unit took off from Genoa Airport in 1986.

The company has produced almost 250 turboprop aircraft in total, with orders for a further 13 under various phases of completion as of late 2020.

The Piaggio P180 Avanti II arrived on the market in 2005, offering Business Aviation operators a more powerful option, with improvements to the avionics and in numerous other areas.

The Avanti II offers a range of 1,470nm, and features more powerful Pratt & Whitney PT6A-66B engines. A Collins Pro Line 21 flight deck replaces the Pro-Line II utilized by its predecessor. The avionics package is integrated with the P180 Avanti II’s navigation and communications systems, according to the company, and the Avanti II is certified for full IFR use with a single pilot.

As the company’s major offering for almost ten years, the Piaggio Avanti II secured a wide range of customers, from the CAEA (Beijing) Aviation Investment Co. to Ferrari. The manufacturer drew particular attention to the Avanti II’s attractive blend of elegance and high performance, which was combined into an economical package.

According to Piaggio, the aircraft has the ability to take off and land on runways of less than 1,000 metres in length; when combined with the platform’s steep approach certification, it means the Avanti II can fly into airports that are not available to scheduled airlines or some other business jets.

Today, Piaggio offers the Piaggio Avanti EVO, which contains a wide range of advances over its predecessor, including scimitar propellers and new winglets. Piaggio says that the aircraft is the most efficient and greenest platform in its category.

The Avanti EVO can exceed 400 knots in speed, powered by Pratt & Whitney PT6A-66B engines, and can achieve a longer range than its predecessors, up to 1,809nm. The EVO can be equipped with an extra fuel tank to boost range, while it also has a larger cabin door than previous P180s versions.

With over 25 years of trading, AvBuyer is the primary marketplace for turboprops offering the best new and pre-owned turboprops for sale. You can read the latest edition of AvBuyer magazine online or visit our online actionable intelligence resources which offer insight, market data and analysis from AvBuyer’s editors and leading Biz Av industry experts.